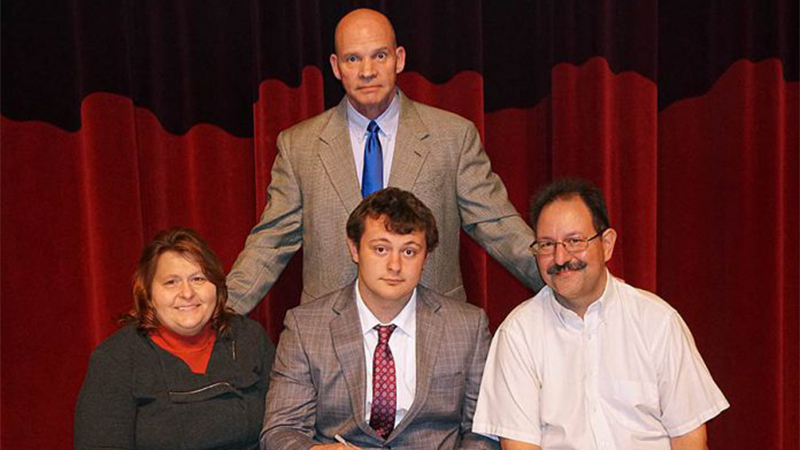 “Since I was 10 years old and put the football helmet on for the first time,” Panchyshyn said.

That dream – to play college football – will become reality this fall when Panchyshyn suits up for Maryville College. The Wolverine senior and family celebrated his decision to join the Scots program with teammates and classmates during a ceremony Tuesday in the school auditorium.

A three-time all-Western Highlands Conference performer, Panchyshyn anchored Polk County’s offensive and defensive lines throughout his career. He will remain a lineman at Maryville, located near Knoxville, though he is not sure yet on which side of the ball he will play.

Nor does he care. Either line represents an opportunity to begin his college career.

“It means a lot when you’ve been dreaming about it and trying to work for it,” Panchyshyn said. “I’ve just been grinding it out and trying to get to this level and I’m just happy to be here now.”

Maryville is a Division III program that competes in the USA South Athletic Conference along with schools such as Brevard College and Methodist College. The Scots finished 5-5 last season after posting back-to-back eight-win seasons in 2015 and 2016.

“Devin, I always say, is tougher than pig iron, just a tough, hard-nosed high school football player,” Ollis said. “A guy who is very dependable, one of our team captains. Devin, if I asked him to play fullback, he’d stick his helmet around and probably do a good job, He was one of the top linemen on both sides of the ball in our league. Never came off the field, ever, and never asked to come off the field.

“He’s a very dependable young man, a great student, and Maryville is getting a quality person and football player.”