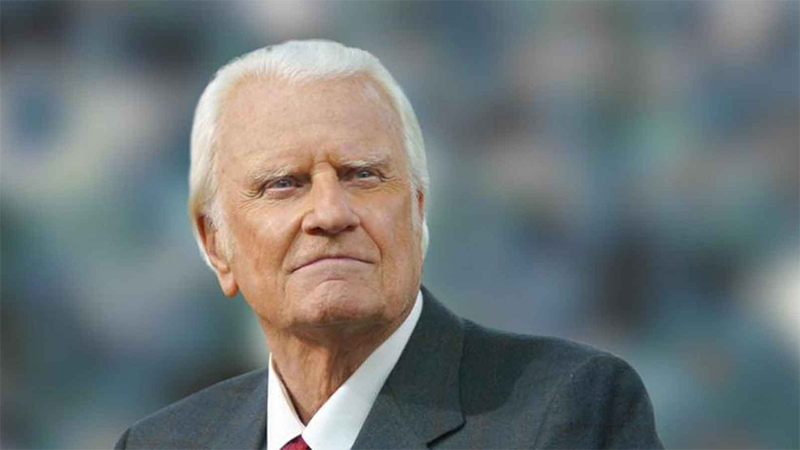 “But God forbid that I should glory, save in the cross of our Lord Jesus Christ, by whom the world is crucified unto me, and I unto the world.” Galatians 6:14

On Feb. 21, the world said goodbye to one of the greatest Christian influences of not only our time, but all time.

His name was William Franklin Graham Jr. We knew him as Billy Graham.

Graham was a preaching phenomenon. He was one of the pioneers of crusades, or revival — like meetings that could go on for months at a time as thousands upon thousands of people would come to faith in Jesus Christ.

Graham preached to more people in his lifetime than any other person in the world — more than preaching greats like the Apostle Paul, the Apostle Peter, Charles Haddon Spurgeon, Martin Luther and Jonathan Edwards combined. He preached live to over 200 million people in more than 185 countries in his ministry.

Because he was so compelled to send the message of the Gospel out to the world, Graham would utilize radio, television, internet and social media outlets to propel his message to hundreds of millions of more people — many of which you probably benefit from today.

Many sources claim that an estimated 2 billion people have heard Graham’s sermons in over 60 years of ministry. People from all over the world are still hearing his messages through his ministries worldwide today.

While I hope and pray that more preachers will be called and sent out in the world to tell others about Jesus, the world may never see someone that has made the impact that Graham has made again. Only eternity will tell how many millions of souls have come to faith in Jesus Christ through the Gospel message presented by Dr. Graham.

Last week, I was watching some of his old sermons, and of course, weeping at how passionate and Holy Spirit filled the man actually was. It seems that everything the man touched, God blessed.

My 6-year-old son came into the room, and he asked, “Daddy, who is that?” I explained to him that he was just a man, but he was man God powerfully used to tell others about Jesus.

It’s then that I realized that there is a generation of people who don’t really know or even care about the ministry Graham has had. I don’t think it’s on purpose, however, I do think it’s a sure wake up call to people like us to continue the legacy of sharing the Gospel as often as we can — not because of Graham, but because of Jesus Christ.

In the end, Graham was just a man. He wasn’t perfect, but sinful. He was never the type who wanted accolades, fame or worldwide success, but God gave it to him.

God used him to be a pastor to presidents, a figure of peace when the world struggled to love one another and one of the most sought out counselors that we have ever seen. His life was lived for the glory of God, and I am so blessed to be brought up in one of the last generations who got to hear him preach God’s precious word.

Many in my family, church family and community are going to heaven because they heard about Jesus through this man’s humble obedience to preach the Gospel. Even though I have only heard him live one time in my life, I, for one, will miss Graham.

The world is in a very sweet place right now. While news outlets and television stations across the world are covering Graham’s life, they cannot help but to share the message of the Gospel with those that are listening. I believe many souls will come to Christ just by watching his funeral on Friday.

I believe God will bless that service in that manner. Who knows? God may usher revival into the world through Graham’s funeral.

Gossip columnists are trying their best to come up with a juicy story that would compromise Graham’s character and tarnish his ministry, but they can’t. When family is asked about his lifestyle out of the pulpit, they claim he was the same man at home that he was before thousands.

Even some of the vilest of people in the political, social and entertainment realms can’t find a trace of dirt on Graham’s journey. I think it’s absolutely inspiring and awesome.

As I told my son that Saturday evening to watch closely and listen clearly, the world may never see another person like Graham. As I think about the blessing that his ministry has been to so many people, I am humbled and convicted by God.

I know I am not called to be like Graham. As much as I have loved his ministry and benefited from his preaching, Graham was a sinful man in need of a savior just like you and me.

His ministry was incredibly blessed, but so is yours. He went and told the world about Jesus Christ — so can you.

Your pulpit may never be in front of 200,000 people in New York City or in front of over a million people in Seoul, but it may be at lunch today with a friend or at a convenient store as you pump gas for your vehicle. You will have opportunities that have never been granted to anyone on this earth in your life.

Graham was a great man, but the savior he loved and preached about was far greater. I pray that the world will only see and know Jesus Christ when they place Graham’s body in the ground, and I pray that you will see how far God is willing to take one human being just to see others hear about Jesus.

In the end, Graham’s life and legacy was all about a relationship with Christ, a submission to God’s will, a decision to uncompromisingly live for God in a sinful world and joyful obedience to carry out his message for the world to hear.

Your calling is not to be like Graham, but to be like the Jesus Christ who lived in his heart. Well done, preacher, well done.

“I haven’t written my own epitaph, and I’m not sure I should. Whatever it is, I hope it will be simple, and that it will point people not to me, but to the One I served.”

Tales of the Hunts: Shed Hunting: ‘Where’s Waldo’ for…