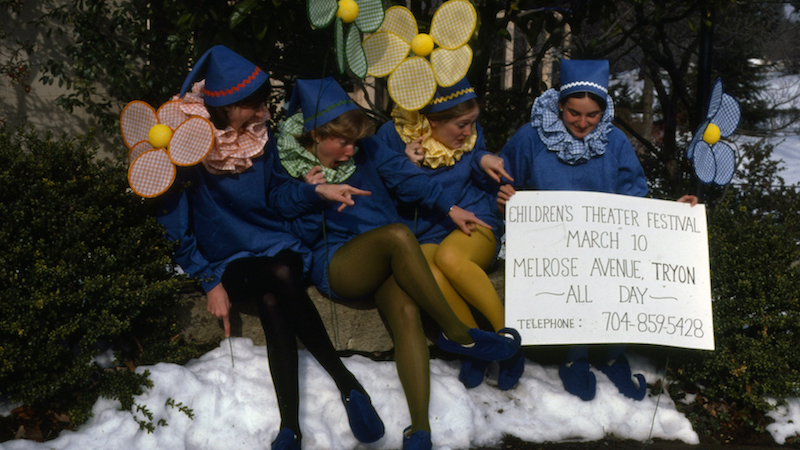 There is a special birthday happening in Tryon on March 17 — Super Saturday turns 40 years old.

Talk to anyone who grew up in Tryon or Landrum in the ‘80s and ‘90s, or who has lived here with children since then, and you will hear “aww, Super Saturday!” in their tone as they tell you their favorite memories: the parade, the puppet shows, the music, the costumes and more.

From the get-go, Super Saturday was meant to provide arts experiences for the area’s children as well as the opportunity for creating fellowship and learning.  Conceived by a determined and driven group of educators and theater folk, and blessed with well-timed financial support, the first Super Saturday took place on March 10, 1979.

Frances Wray and her husband Joe were members of the visionary group that created the Children’s Theater Festival board, which has run Super Saturday every year since then.

“Super Saturday was hard-wired into our family,” she said.

“Growing up in the Wray family we were always the first to be volunteered,” Whitney said.

Whitney, for example, was one of the Logo Girls from the early years, who dressed in bloomers with gingham ruffs and elfish hats, in the style of the Super Saturday jester logo created by Tryon artist Ann McCown. These teens, older than the Super Saturday target audience of elementary-aged children, served as cheerful guides to families making their way up and down Melrose to the shows.

Over the years much has evolved in the execution of Super Saturday. The Logo Girls are no more, though there are still plenty of teens among the many volunteers who make the day happen. That first year, there were three venues, all on Melrose Avenue, each with a morning and an afternoon show.

This year’s festival offers nine acts in five venues both on and off Melrose, plus a host of street entertainers. It took more than 30 years, but ticket prices eventually doubled: getting into a show will now set you back $2 instead of $1.

But some features have not changed since the early days. For example, the parade down Melrose is still fully up and running. Former CTF chair Amber Keeran remembered her amusement upon finding out that the parade ran “just to the end of the block.”

“I still use that [description] when I describe the parade to performers and tell them all it is my favorite part of the day and will likely be theirs, too,” she said.

Another CTF board member, Justin Lawrence, is a Super Saturday lifer: a toddler at the time of the first Super Saturday, he says it was “a big part of my childhood.”

He continued to attend as a teen, working as a stage manager and ticket taker with his Boy Scout troop, even organizing the parade one year as his Eagle Scout project. “When I moved back to Tryon, Super Saturday was one of the things I was excited most about because I was just becoming a father and could not wait to take my kids to something that meant so much to me,” Lawrence said.

Others on the CTF board share his nostalgia: Kathy St. Clair remembers the year she and her kids dressed up as Harry Potter characters for the parade. Molly Dunn and her daughter loved studying the brochure in February and picking out the shows they wanted to see. They all enjoyed meeting friends there, and as Lawrence says, “people I grew up with and had not seen in years were now bringing their kids to Super Saturday. Even now, it’s like a reunion each year.”

It’s this community aspect of the day that is just as important for children and their families as the arts part. Monta Whitney remembers that the “community embraced this event,” putting up actors in their homes, for example, connecting the community “not only to the event but to the participants.”

Friendships with performers, friendships between families, all nurtured in these cultural interactions on Melrose, “transformed this event from something that happened in Tryon to being Tryon.”

This day of arts experiences designed expressly for the children of our community will take place for the fortieth time on March 17. Turner/Tennant Foundation Inc. is the presenting sponsor of Super Saturday.

Funding for Super Saturday is also provided by the Mary F. Kessler Fund at the Polk County Community Foundation.

Take a look at this year’s lineup of performers at tryonsupersaturday.com, and make plans to bring your family for a day you will not forget.