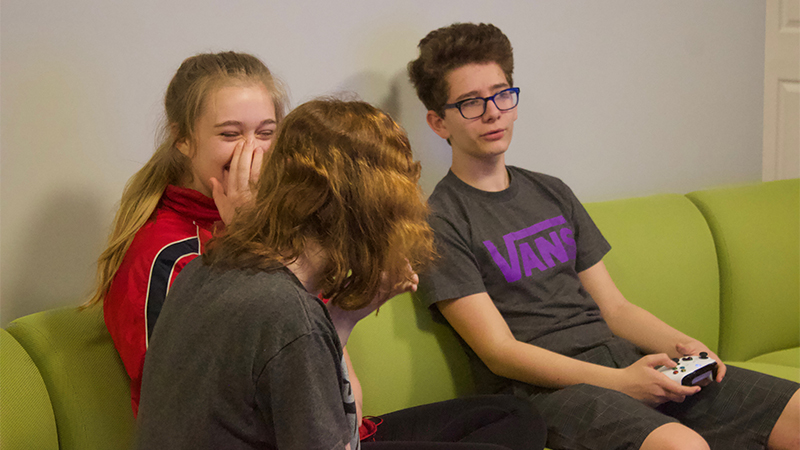 A group of teenagers play on the Xbox One console in the space. (Photo by Ted Yoakum)

SALUDA — Thanks to the support — both financially and physically — from some dedicated adults, members of the community’s next generation have a new place where they can hang out and express themselves.

Leaders with Polk County Public Libraries welcomed guests to its new teen space, located in the basement of the Saluda Library, during a special grand opening ceremony Thursday afternoon. Several dozen adults and teenagers attended the event, which was capped off with a ribbon cutting.

With a massive flat-screen TV hanging from one of the bright lime-colored walls — connected to an Xbox One gaming console beneath it — surrounded by chic artwork, comfy couches and tables, and a giant black chalkboard in the back of the room, the space feels like something out a teenager’s imagination for the ultimate basement hangout space than something one would expect to find at a public library — that is, until one notices the centerpiece of the room, a huge bookshelf filled with novels from popular young adult authors.

Rishara Finsel, director of Polk County Public Libraries, said the area was designed to give local teens a place where they could come after school or on weekends to socialize, read, play games, create digital or physical artwork, and do a litany of other things.

“This is a space where teens bring their interests to explore, rather than having sanctioned interests imposed upon them,” Finsel said.

The furniture in the space is designed to be easily movable, so that teens and staff can rearrange the room to accommodate either group or solo activities, Finsel said.

The opening of the space fulfills a vision that leaders with Polk County Public Libraries had for the past several years, Finsel said. The Saluda Library typically has around 20 to 30 teenagers visiting the library after school, who, before the opening of the teen space, were limited to a handful of quiet activities on the main floor to preoccupy themselves.

Last summer, library leaders decided to do something to fix that, and began work to transform the underutilized basement of the Saluda location into a place that teens could call their own.

The City of Saluda, which owns the building, agreed to pay for labor to repaint the room and install new furniture and furnishings, with the county library covering costs for materials, Finsel said.

Helping guide the project were members of the Saluda Teen Advisory Group, an organization of local teenagers who gave input into what kind of uses they wanted from the space. The teens also provided suggestions into the design of the room, as well as selected artwork for the walls, Finsel said.

“They told us they wanted more of a coffee shop vibe, and less of an elementary school vibe,” she said.

Helping cover the around $16,000 worth of renovations was a grant from the Polk County Community Foundation, as well as a bequest from the estate of Louis M. Buzek, a longtime patron of the Saluda Library. 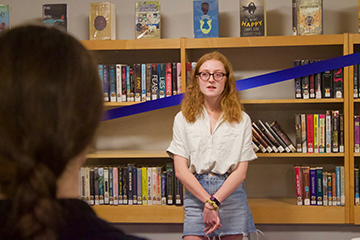 Sadie Allen, president of the Saluda Teen Advisory Group, addresses the crowd inside the new teen space at the Saluda Library Thursday. Allen was one of the many local teenagers who provided input into the creation of the library’s newly remodeled basement area, which offers teens a place to hang out after school or on weekends. (Photo by Ted Yoakum)

“I just want to say, on behalf of all the teens, how grateful we are to have this space, especially [because] the library is meant to be a calm space upstairs for everyone in the community to gather,” Allen said. “This gives us a place to be ourselves, interact socially, eat some snacks [and] hang out. We are eternally grateful for the benefactors, the supporters and the painters — everyone who made this possible.”

Finsel said that Polk County Public Libraries will also look at eventually creating a similar space at the Columbus Library.

The Saluda Library is located at 44 W. Main St. For hours and more information, people may call the library at 828-749-2117 or visit https://polklibrary.org.