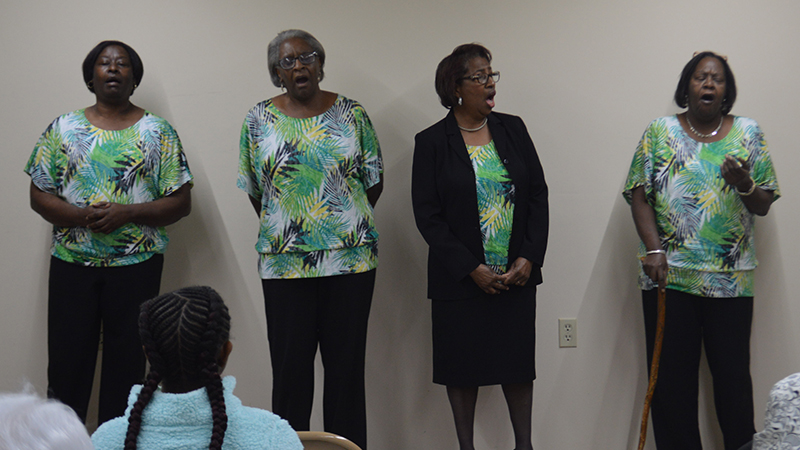 Alinda Jackson keeps time with her cane, as she and Barbara Cummings demonstrate note singing. The ensemble performed several African American favorites for the museum crowd, as well as shared some history of the Mill Spring church and their efforts to restore it. (Photo by Catherine Hunter)

COLUMBUS — The echoes of old spiritual ballads and shape note singing rang through the halls of the Polk County Historical Association Museum Sunday afternoon as the Stony Knoll Ensemble Singers shared some of their gospel songs.

The four ladies beautifully harmonized on some historic African American favorites, such as “Steal Away,” “Mighty Good Day” and “Power in the Blood.” The group swayed in time with the rhythm as the audience clapped along. Much of the audience that overfilled the museum’s space included residents from Tryon Estates, where the Rev. Arbutus “Arbie” Hines works.

Hines also serves as pastor for the Stony Knoll Methodist Church in Mill Spring. Hines opened Sunday’s program with a little information on the history of the church and their efforts to renovate the building.

“The Stony Knoll church is the oldest institution in the community,” said Hines. “It was organized in the 1880s, and they originally met under a brush arbor.”

According to Hines, the first building was made of logs, then they built a larger frame building in 1912.

The members tore down the church in 1945 to build the block building that still stands today.

“The blocks were handmade by Isaac Mills,” Hines said. “It must have taken some strong men to lift those blocks.”

Hines said the church is in the process of renovating the building and adding bathrooms.

“Thank you for all the donations,” she added.

She also talked a little about the traditional gospel music the ensemble sang on Sunday afternoon, saying it was, “a way to tell God what we want even in a strange land. It’s the romance of going to a favorite spot or tree to talk to God.”

The singers mostly perform a cappella, but, at times, are accompanied with the piano. Responding to questions from the audience, the ladies said the songs were often a form of communication between the slaves.

“They told the slaves when and where they could go,” said singer Betty Landrum. “They would also hang quilts on the line that had patterns telling the slave where and when to go.”

Hines invited everyone to attend the “Eastside Renaissance: A Black History Month Celebration” at the Roseland Community Center on Peake Street in Tryon on Saturday at 5 p.m.