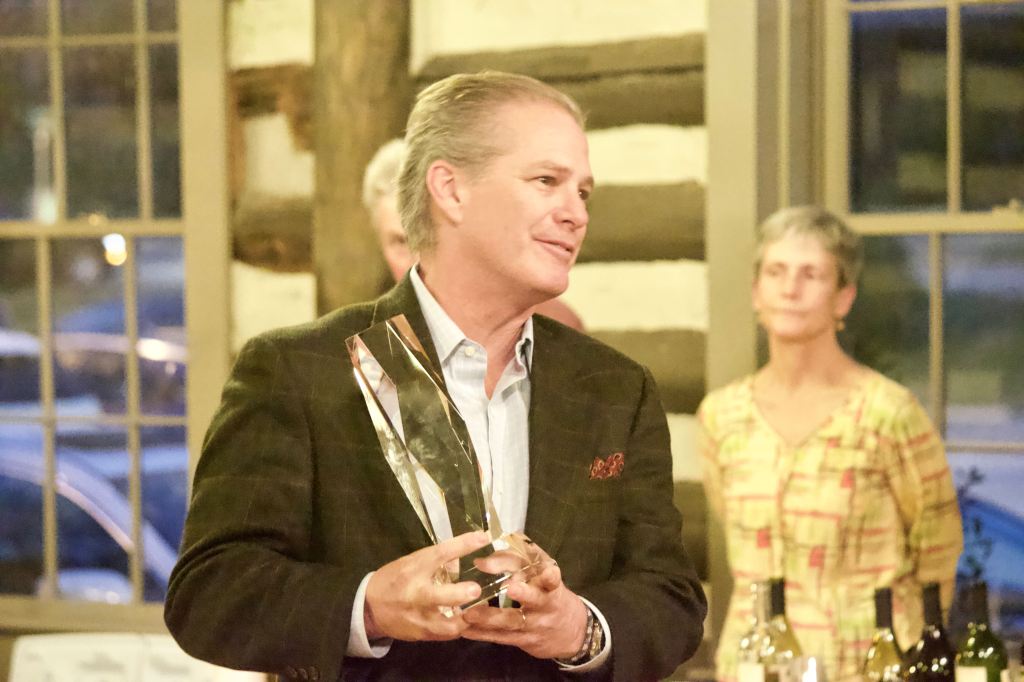 Scott Lane, owner of The Tryon Theatre, gives a speech to the crowded con nes of Sunnydale after accepting the Duke Energy Citizenship and Service Award Tuesday evening. Lane and his wife, Gayle, were among the several area business owners and professionals recognized by the Carolina Foothills Chamber of Commerce, during the organization’s annual awards night that evening. (Photo by Ted Yoakum)

TRYON — Love was in the air inside the cozy wooden confines of Sunnydale, as members of the Foothills business community recognized the passion and dedication of several of their own Tuesday.

The Carolina Foothills Chamber of Commerce hosted its annual awards ceremony that evening, where it honored four area business leaders and professionals for the countless hours and endless energy they have poured into improving the chamber and the area as a whole. Nearly 60 attended the ceremony, which — taking place in February — had a “love” theme.

Receiving the Duke Energy Citizenship and Service Award that evening were Scott and Gayle Lane, owners of The Tryon Theatre on Trade Street. Craig DeBrew, district manager with Duke Energy Corporation, presented Scott with the award — Gayle was unable to attend Tuesday’s ceremony.

The award recognizes leadership, volunteerism and community service, which “encourages a culture of service and complements the efforts of individuals and organizations striving to improve the quality of life in their community,” DeBrew said.

The Lanes were given the award based on their efforts to revitalize downtown Tryon. Over the past several years, the couple have purchased three historic buildings in the district, which had sat vacant for years, and repurposed them into structures for commercial and residential use, which have made Tryon a more “vibrant place to live, work and visit,” DeBrew said.

The couple is currently plan- ning a series of renovations to The Tryon Theatre, which are intended to bring the building back to its glory days. They plan to launch their efforts this year, DeBrew said. Scott and Gayle are also active members of the community, and have served on the boards of the Tryon Fine Arts Center, Tryon Downtown Development Association, Upstairs Artspace and the Tryon Garden Club, among others, DeBrew said.

After accepting the award, Scott thanked members of the chamber for the work they do, and that everyone in the room that evening has played a role in making the Foothills community a better place.

“What the chamber does is so critical to the community,” Scott said. “You guys pull together, not just on the economic and commercial values of the community, but the quality of life we all are attracted to out here.”

Also honored Tuesday was Tommy Williamson, owner of Williamson’s Paint Center in Landrum, who the chamber bestowed with its Businessperson of the Year award. Williamson — whose father, Joseph, opened the Landrum location in 1985 — has worked in the paint industry for more than 30 years. He has served on the board of the Tryon Little Theater.

The chamber also awarded its Volunteer of the Year award to Deborah Fields Russ, with Melaleuca and Kangen Alkalizing Ionized Water System, for her work assisting the chamber with events, promotion and other tasks. She was unable to attend Tuesday’s ceremony, as she was performing in a play that evening, said chamber treasurer Meshelle Colvin, who was to present her with the award.