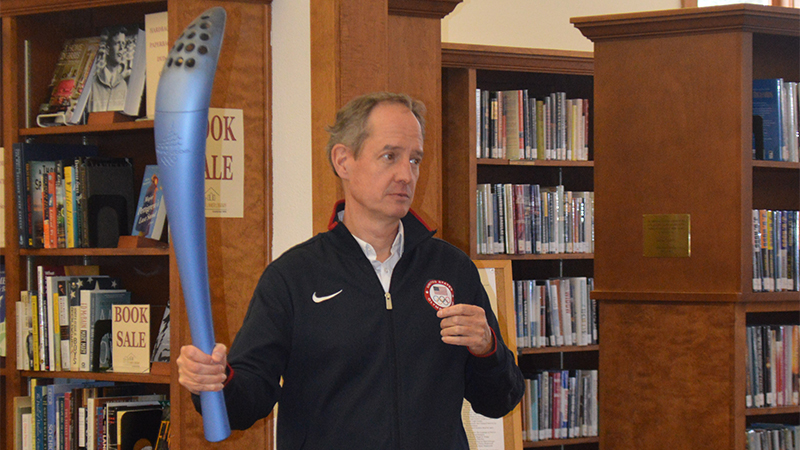 Lanier Library Executive Officer Peter Franklin uses an Olympic torch to demonstrate how Olympic torchbearers are instructed to hold the torch as they carry it to the next runner. (Photo by Catherine Hunter)

TRYON — He has carried the Olympic torch six times, and traveled with it around the world.

“The torch has been carried by horseback, on trains, by ski mobiles and the Russians even took it into space,” Franklin said. “The Australians took it under the great barrier reef and the First Nations [American Indians in Canada] carried it on horseback for the Vancouver Olympics in 2010.”

Franklin worked as a former marketing vice president for Coca–Cola, which has been an Olympic sponsor for 100 years. He was an organizer for Coca–Cola’s sponsorship, and helped manage the torch runs since 1994.

Franklin surprised the crowd by relating that, while the lighting of the torch was a tradition from ancient Greece, the torch run is a modern event. The tradition actually started in the 1936 Olympics in Berlin.

According to Franklin, there are approximately 15,000 torch carriers. In the past, the carriers paid a $10,000 donation to be allowed to bear the torch.

“Now, 90 percent of the carriers are selected according to the community service they have done,” he said.

The torch weighs approximately 5 or 6 pounds
depending on the design, and each torchbearer usually runs approximately 50 to 100 yards. Carriers are advised to hold the torches away from their bodies, and not to wear hair spray.

Franklin showed several pictures of the people he has met and the places he has traveled with the torch. He said the most exciting time he carried the torch was in 2004, when he carried it around ancient Olympia.

“It was very cold that morning and an old woman, who was herding some goats, came and gave me a sweater to wear until the torch came by,” he said.

Franklin brought samples of three torches he has carried throughout his career. These samples will be on display at the library.