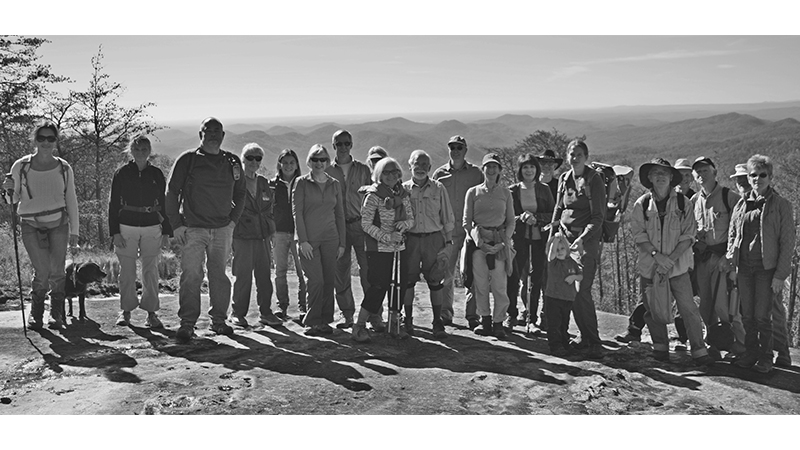 Join Conserving Carolina for six Friday hikes offered to the public, free of charge, this spring.

Starting March 2, the first trek will head to Hickory Nut Gorge for a hike along the Little Bearwallow Trail to Wildcat Rock.  This newly opened trail was constructed by Conserving Carolina and a team of partners in 2016.

The 3.8 mile, strenuous, out and back hike will lead the group to the 100-foot Little Bearwallow Falls and then up 130 stairs to the top of Wildcat Rock. The reward for this strenuous climb is a dramatic view of the entire Upper Hickory Nut Gorge.

On March 16, the hike will take place in the Davidson River Area of Pisgah National Forest, along the Daniel Ridge trail.  This 4.2 mile, moderate, loop trail starts by following the Davidson River, then leaves the river and follows Lanning Branch, ascending the ridge and offering beautiful views of Pilot Mountain.

After descending the opposite side of the ridge, hikers will be led to the base of a 90-foot waterfall before returning to the starting point.

On March 30, hikers head to the Mills River Area of Pisgah National Forest for a 6.5 mile, moderate, loop hike.  The trail will follow Trace Ridge to Spencer Gap, making a loop around Coffee Pot Mountain

Upon descending the mountain, the trail follows Spencer Branch to Fletcher Creek, then finishes up by following the North Fork Mills River back to the trailhead.

On April 13, Conserving Carolina partners with Polk County Recreation to offer a moderate 10-mile, one-way, hike along the Palmetto Trail.  Polk County Recreation will provide a shuttle to a trailhead at Orchard Lake Campground and participants will hike the Palmetto Trail along the NC/SC state line and along the northern perimeter of the Greenville Watershed, then down Brushy Ridge, along Hog Back Mountain Road, down Vaughns Gap, and into the Blue Wall Preserve where their vehicles will be waiting.

On April 27, the group will head to Tanbark Ridge off the Blue Ridge Parkway for a 4.8-mile, easy, out and back hike along a portion of the Mountains to Sea Trail.  The trail weaves through a hardwood forest, crossing a few creeks, and will take the group to the Tanbark Ridge Overlook off the Parkway.

From the overlook, hikers will see extensive mountain views over the Great Balsams.  From there, hikers will take the trail to Bull Gap then turn around and head back to the starting point.

On May 11, the group will head to Pinnacle Mountain (Long Ridge) in Table Rock State Park in SC.  The 5.5-mile, moderate hike will traverse areas affected by fires in the fall of 2016 and lead hikers to a granitic bald where, in the late 1990s, more than 600 prehistoric petroglyphs were discovered.

The petroglyphs are believed to be created by the Hopewell culture and pre-date the Cherokee. They are thought to be between 1,500 and 3,500 years old.

Before this hike, join Conserving Carolina and the Landrum Library on May 8 at 6 p.m. for a free lecture about this petroglyph site. Noted naturalist, historian and outdoor writer Dennis Chastain will be presenting, “Native American Rock Carvings of the Carolina Mountains.”

If you are interested in attending Conserving Carolina’s spring hikes and would like more information, call the Southeast office at 828-859-5060 or e-mail Pam Torlina at, pam@conservingcarolina.org.