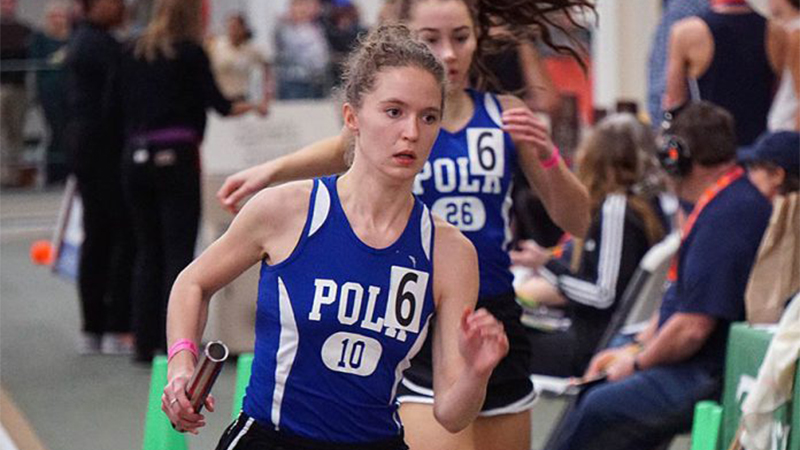 Polk County’s Izzy Jackson heads into the anchor leg of the 4x400-meter relay after taking a handoff from Sydney Waldman. (Submitted photo)

Izzy Jackson was not certain if she would come home from Friday’s state 2A/1A indoor track championships with a medal.

And she did not bring one back from Winston-Salem—she brought two.

Jackson finished third in the 500-meter dash and ran the anchor leg on Polk County’s second-place 4×400-meter relay team to lead a strong showing by the Wolverine girls squad in the state meet at JDL Fast Track.

Joining Jackson and the 4×400 relay team with a medal was senior Reagan Waddell, who placed third in the shot put with a throw of 35 1/4. Anson’s Patience Marshall broke a 30-year-old state record in the event with a throw of 44-8, more than a foot better than the previous mark, to claim the state title.

Polk County’s Lauren Ketwitz narrowly missed a medal in the pole vault with a personal best of 9-6, placing her fifth. The four vaulters ahead of her all matched or broke the state record, with Surry Central’s Sarah Brown clearing 11-0 to win the event.

Jackson posted her fastest time of the season in the 500 with a 1:20.35, less than three seconds behind West Montgomery’s Araybian Lilly. Croatan’s Kaleigh Henson placed second.

“I had a PR for the season with a 1:20.35 and finished third. I’m pretty excited,” Jackson said. “I didn’t think I was going to do well. This season wasn’t as good as I expected. So today is really a good day.”

In the 4-by-400-meter relay, Madison Geddings ran the opening leg and put the Wolverines in solid position, with Reese Alley running a strong second leg to move the Wolverines into second place. Sydney Waldman kept them there before handing the baton to Jackson.

“I knew what I had to do,” she said. “The other girls did what they were supposed to do and did a great job. I just had to bring it in.”

For Waddell, the shot put medal came in just her second season competing in the event and capped an indoor campaign in which she posted the longest put in school history.

“It feels so amazing. I’ve worked really hard for it,” Waddell said. “I’ve got the best coach (Amanda Simoncic) ever. She has helped me so much. I wouldn’t have done any of this without her.

“I placed third, but it wasn’t until my last throw. I wasn’t doing too well today, but before the last throw, Coach said to do a leave it all on the court kind of thing. I threw it as hard as I could.”