Landrum loses a bit of elegance 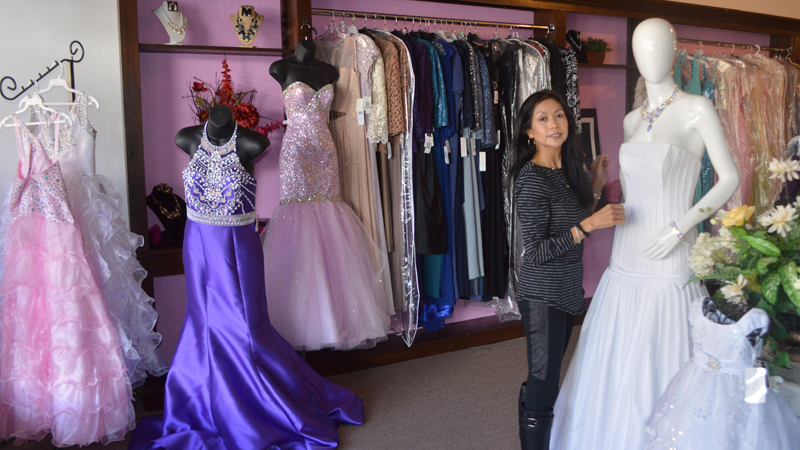 Though Gifted Boutique owner, Joy Southern, is closing the store, she will still offer alterations on formal dresses. (photo by Catherine Hunter)

LANDRUM – Very soon the elegant, colorful dresses that grace a Landrum store window will be gone. Joy Southern, owner of Gifted Boutique is closing the store.

“I can’t keep working two jobs,” Southern said. “I have to give up the store because we’re so busy at the restaurant.”

Southern is closing the Gifted Boutique this spring. She said, though she will no longer sell them, she will continue her alteration work on formal dresses.

The Gifted Boutique is Southern’s dream store. After fleeing her home in war torn Laos to Thailand, she learned to sew at age 14 and studied fashion design at age 17. She worked for a dress shop in Gastonia, then opened Gifted Boutique in Tryon in 2013.

Her restaurant, Soulisa’s Fine Thai Dining, opened in Landrum in 2012. When the space next to it on E. Rutherford St. became available in May of 2014, she moved the dress shop there.

“I could go back and forth between the two businesses,” she explained. However, as the restaurant became more and more successful, she realized she couldn’t keep doing both.

“Last year during prom I was just too busy,” she said. “Now I’ll have time to visit the grandchildren in Illinois. I love them so much.”

Southern hasn’t set an exact closing date. She said she would have to sell out her current inventory of elegant formal dresses that she buys at the dress market in Atlanta. The dresses, along with the few other prom accessories such as earrings and shoes, are currently marked down in anticipation of an inventory clearance.

“I will still do alterations for formal dresses,” she said. “I love doing that.”

To contact Southern for alterations, visit the store’s Facebook page at Gifted Boutique or stop by Soulisa’s Fine Thai Dining of E. Rutherford St. in Landrum.