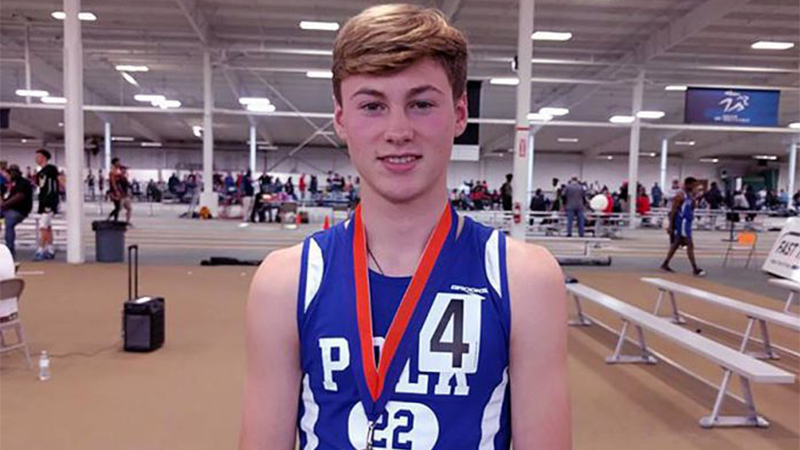 No shoes, no problem for Jake Justice.

The Polk County junior reached Friday’s state 2A/1A indoor track state championship meet in Winston-Salem without his shoes. So, he borrowed a pair from teammate Matias Akers – and soared into Wolverine history.

Justice became the first pole vaulter in school history to win a state title, doing so Friday in the state meet at JDL Fast Track. Justice eventually cleared 14-4, the best performance by a Polk County vaulter in a state meet, and just 2inches shy of the state record.

Justice’s second try at 13-6, which he cleared, proved the winning jump, as East Henderson’s Noah Gordon failed to move past 13-0. Justice next cleared 14-0, then reached 14-4 on his second try.

He took three shots at 14-7 to break the state record, but just missed on each.

It did not detract any from the day.

“It feels great. I’ve been working for it for almost three years now,” Justice said.

“It helped a lot,” Justice said. “(Lieberman) was a role model for me. I just followed his steps. He went to college to pole vault and that’s my goal. He helped me a lot.”

Missing shoes were not the only worry of the week for Justice, who at one point thought he was getting the flu. He tested negative for the virus, but still did not feel 100 percent Friday.

If he was unwell, his performance certainly didn’t show it.

“He just has a love for competition,” said Polk County assistant coach Henry Weaver, who works with the Wolverine vaulters. “He started vaulting in ninth grade, and we only had three vaulters at the beginning of the year, and the other two were seniors.

“From day one when he stepped out there, it was like, I’m going to be the best.”

Justice also came into the day seeded second in the long jump, which began just before the pole vault competition. Justice finished his jumps and walked a few feet to the pole vault area to begin competing there.

He admitted he was not as focused for the long jump, and finished 17th with a best leap of 19-2. Teammate Dillon Overholt took 10th, with a jump of 20-0.

“Long jump really stressed me out,” Justice said. “I was ranked second in the long jump, but pole vault was always my priority.

“I didn’t do so well in the long jump, but I told myself I was going to do it here, and it worked out.”