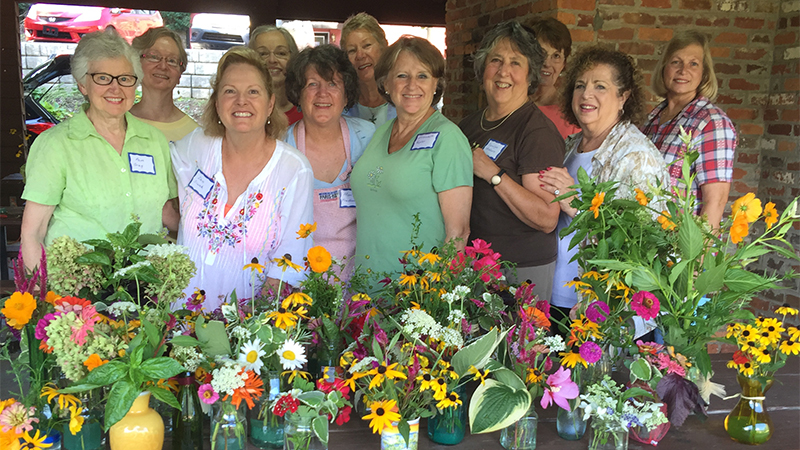 SALUDA – A visit to a local winery and learning about bird watching are just two of the events the Saluda Garden Club is planning for 2018. Club President, Karen McGee said this year’s first meeting will include planning an events calendar.

The club’s roots go back to 1990 when the Mountain Laurel Garden Club was founded. According to McGee, the club became inactive for a short while. Then, in 2005, Sally Thomas re-formed the group under the name, Saluda Garden Club.

They currently have approximately 30 members and take on service projects such as maintaining and beautifying Saluda’s historic Spring Park and making flower arrangements for Saluda City Hall, Autumn Care and other businesses. In 2016, the club helped facilitate the donation of a tree to Saluda Elementary School for an Arbor Day project.

In addition to the service projects, the club is about education and fun for its members. In the past they have entertained speakers from local businesses and the Polk County Extension Agency. McGee said this year they plan to have a speaker on the subject of bird watching.

The club regularly visits members’ gardens and enjoys adventures such as a visit to the Lake Lure Flowering Bridge, GaGa gardens in Columbus, NC, and several other local businesses. They wrap up each year with the November meeting that includes a craft session and a potluck lunch.

“We are always looking for new and interesting places to visit,” McGee said. “Our motto is, ‘our roots grow deep so the future has a past.’”

In addition to McGee serving as the club’s president, this year’s Saluda Garden Club officers are Vice President, Jaine Nelson, Treasurer, Anita Moore and Secretary, Susan Cannon. Jaine Nelson will also serve as the club’s Historian and Tuula Veil is the coordinator for the handbook committee.

The first meeting for 2018 will be Monday, Feb. 19 at 10AM in the upstairs room of the Saluda Library. The club’s regularly scheduled meetings are the third Monday of each month except for January, July and December. All are welcome. Those seeking more information are invited to attend the February meeting or contact McGee at 828-749-2530.