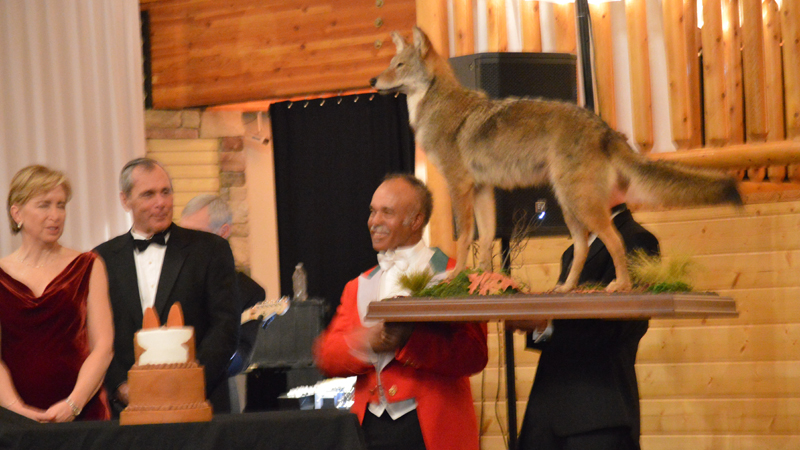 Members of Green Creek Hounds staff present MFH and Huntsman, Tot Goodwin, with a stuffed coyote for his birthday during the GCH Hunt Ball, Saturday, February 3. (photo by Catherine Hunter)

Goodwin begin serving as Huntsman for the Green Creek Hounds in 1989. This year’s hunt ball included a celebration of Goodwin’s birthday.

“He [Goodwin] taught me everything about hunting and hounds,” said GCH Honorary Whipper In, Jana Hinley. “He and Colleen [Goodwin’s wife] are family.” 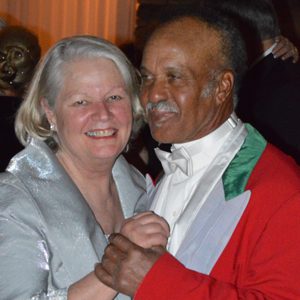 According to his wife, Colleen, Goodwin started his equine career at age 19, working with “foxhunting legend,” MFH Benjamin H. Hardaway III who founded the Midland Hounds in Columbus, Ga. Within one year, Goodwin was whipping in for Hardaway.

“He [Goodwin] has hunted all over the US, Canada and England,” Colleen said.

During the celebration, hunt staff presented Goodwin with a birthday cake and a stuffed coyote, which he apparently dove into a river to retrieve after hounds had run the coyote to a kill.