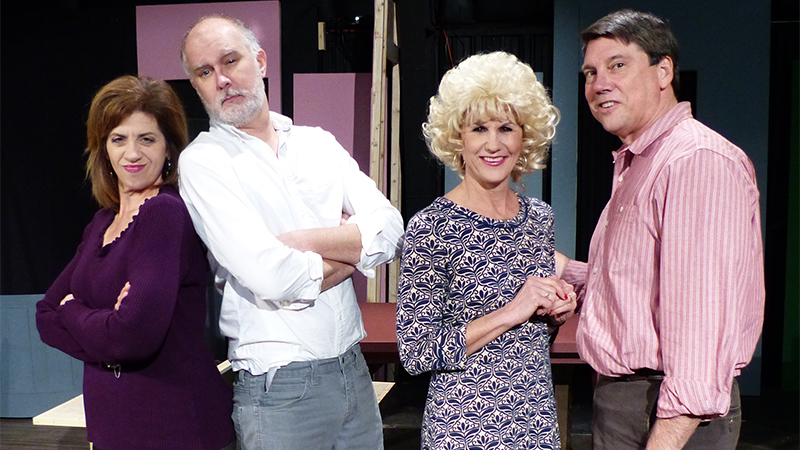 2018 is the 70th anniversary of both TLT and “Kiss Me, Kate” – a perfect pairing!  You remember how it begins: “Another op’nin’, another show/ In Phily, Boston, or Baltimo’/ A chance for stage folk to say hello/ Another op’nin’ of another show!”

And the delight just builds from there – with ex-spouses Fred and Lilli battling as Petruchio and Katherine in “The Taming of the Shrew” onstage and continuing to feud as themselves when off, femme fatal Lois dangling multiple suitors both as herself and as Kate’s younger sister Bianca, two mobsters horning their way backstage to collect a gambling debt from one of the actors and instead getting caught up in the exuberance of Shakespeare . . . on and on.

TLT last produced “Kate” as the season opener in October 1992 with Mike O’Steen as Petruchio and Patti Peake as Lilli, with Pam McNeil as Musical Director.  Now 26 years later, Pam is back at the piano, and Mike is in the less daunting roles of various theatre company members.  Also back from that 1992 cast: Jeff Carter, once again as a principal dancer.

This time around Chris Tinkler is playing Fred/Petruchio, Wendi Arms is Lilli/Katherine, Susie Kocher is Lois/Bianca, and Guy Winker is her gambling suitor Bill/Lucentio.  And the gangsters – Stan Peal and Lou Buttino, a deliciously comic pair.

“Kiss Me, Kate” opened on Broadway December 30, 1948, and went on to play 1077 performances.  The marvelous Alfred Drake was Fred/Petruchio and Patricia Morison played Lilli/Katherine.  In 1999 “Kate” was revived on Broadway with Brian Stokes Mitchell and Marin Mazzie dazzling the audience – 881 performances this time around.