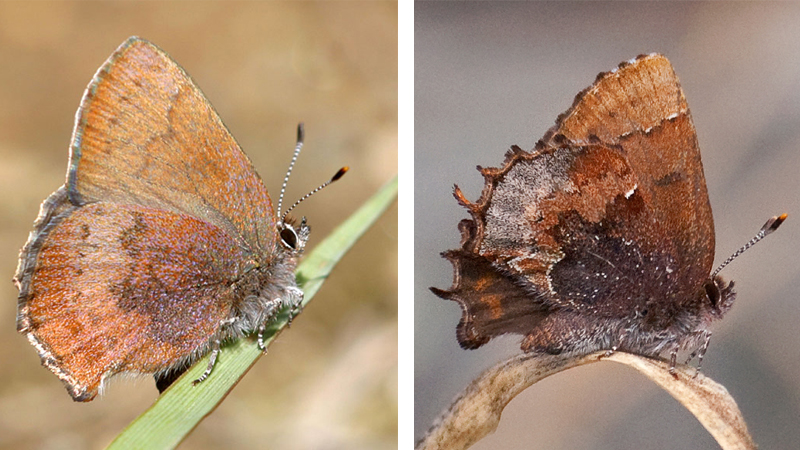 In a joint effort to expand the knowledge and understanding of the flora and fauna of Polk County, Conserving Carolina (formerly Pacolet Area Conservancy (PAC) and Carolina Mountain Land Conservancy (CMLC)) and botanist, David Campbell, need your help in locating this month’s “Polk County’s Most Wanted-Animal(s),” Elfin Butterflies.

Elfin Butterflies are in the Family Lycaenidae, the true butterflies, of the Subfamily Theclinae; the Hairstreaks.  They are small, ranging in size from ⅞ʺ – 1¼ʺ.  They are also fairly subtle in coloration, displaying a range of shades of brown to gray.  This species is active in the early spring, usually on the wing as early as February or March in North Carolina.  There are 4 species known in N.C., the Brown Elfin (Callophrys augustinus), Henry’s Elfin (Callophrys henrici), Eastern Pine Elfin (Callophrys niphon), and Frosted Elfin (Callophrys irus).  The first three should occur in Polk County, but there are no recent records from the County.  The last species, Frosted Elfin, was recorded from the County in the past, but it is a historical record and there are no recent records.

Each species has a unique habitat and life cycle requirements.  The Brown Elfin prefers mixed coniferous woods, barrens, bogs, sandy coasts, and chaparral (an acidic, low shrub or heath plant community). They are normally found on xeric (very dry) hillsides with an abundance of Lowbush Blueberry (Vaccinium spp.), a preferred food/nectar plant.  Other adult food/nectar plants include early blooming plants, such as Spicebush (Lindera benzoin), Willow (Salix spp.), Winter Cress (Barbarea spp.), and Wild Plum (Prunus americana).  Caterpillar host plants include members of the heath family (Ericaceae), including Sugar Huckleberry (Vaccinium vacillans) and Labrador Tea (Ledum groenlandicum).  The Brown Elfin has one flight, from March-April.  The upperside of the wings are gray-brown on the male and reddish brown on the female.  The underside of the wings on both species is chestnut brown with a dark irregular postmedian line, and the hindwing is dark at the base; this species is tailless and they range in size from ⅞ʺ – 1⅛’’.

Henry’s Elfin prefer edges and openings in barrens and near pine or pine-oak woodlands. They are usually found near their preferred food/nectar plants, Eastern Redbud (Cercis canadensis) and American Holly (Ilex opaca). Other nectar plants include willow (Salix spp.), Wild Plum (Prunus americana), Hawthorn (Crataegus spp.), and Forestiera spp.  Eggs are laid on Eastern Redbud, Ilex spp., Vaccinium spp., and some species of Vuburnum.  Henry’s Elfin has one flight from February-May.  The upperside of both species is dark brown; however, the female has an oval spot on the front edge of the forewing, which is absent in the male. There is often a dull orange tinge along the outer margin of forewing and near the barely present tail on the hindwing.  The underside of the forewing in both has a fairly straight postmedian line while the hindwind has some white in the postmedian line. This species ranges in size from 1ʺ – 1¼ʺ.

Eastern Pine Elfin prefer areas with small to medium pines such as forest openings and edges, and old fields. Adults feed on nectar of many different flowers including Blueberry (Vaccinium spp.), Cinquefoil (Potentilla spp.), Chickweed (Stellaria spp.), Common Milkweed (Asclepias syriaca), and White Sweet Clover (Melilotus alba).  Eggs are laid on various pine including Virginial Pine (Pinus virginiana) and White Pine (P. strobus).  Eastern Pine Elfin has one flight, from March-June.  The upperside of the wings is dark brown in both species, and on the female, the upperside has dark borders. The underside of both species is banded with dark brown and the hindwing has a gray band with an outside row of black crescents. This species is tailless and 1ʺ – 1¼ʺ in size.

The Frosted Elfin prefers open woods and forest edges, fields, and scrub. They feed on the nectar of numerous flowers. Eggs are laid on members of the pea family (Fabaceae), such as Indigo (Baptisia tinctoria) and Lupine (Lupinus perennis), and occasionally Blue False Indigo (B. australis) and Arrowhead Rattlebox (Crotalaria sagittalis).  Frosted Elfin has one flight, from March-April. The upperside of the wings of both species is brown and the male has a long, dark, oval spot on the leading edge of forewing.  On the underside of the forewing, the postmedian line is irregular.  The postmedian line of the hindwing contains one short tail, has a faint postmedian line, and a submarginal black spot above the tail.  This species is 1ʺ – 1¼ʺ.  Frosted Elfin has a global status rank as G3, or Vulnerable – it is at moderate risk of extinction due to a restricted range, relatively few populations, recent and widespread declines, or other factors.  The state of North Carolina ranks this species as S2, or Imperiled – due to rarity or some factor(s) making it very vulnerable to extirpation from the state. There are typically 6 to 20 occurrences or few remaining individuals (1,000 to 3,000).

This spring, readers are asked to keep a lookout for these small, early butterflies, and if you see them, please let us know!  Photos are encouraged for identification and can be sent with comments or questions by e-mail to Pam Torlina at Conserving Carolina, 828-859-5060 or pam@conservingcarolina.org.