The history of the Tryon Daily Bulletin 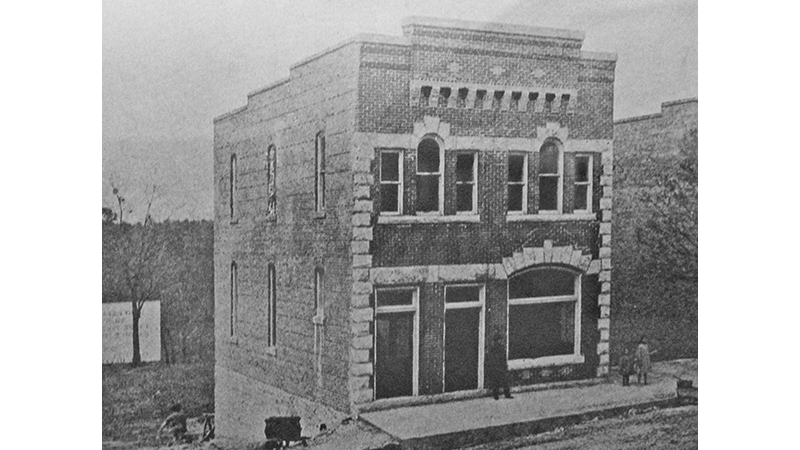 In 1935, Seth Vining Sr. moved The Tryon Daily Bulletin offices to the old Bank of Tryon building, sharing space with several other businesses renting there, including a barbershop. The bank’s vault remains; the money is long gone. Vining purchased the building in 1959. 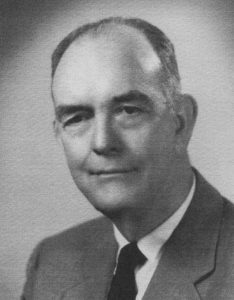 Vining Sr. had a printing shop located beneath the A&P Tea Company grocery store (now Owen’s Pharmacy), which is where the first papers were printed. Vining Sr. was said to have a little time on his hands, so he printed off a page announcing the new Chamber of Commerce officers and a local fire and he walked up and down the street giving the paper out.

Vining Sr.’s statement of the purpose of the newspaper was, “This, the initial issue of the Tryon Daily Bulletin, goes to you as a result of our firm belief that such a publication will be of service to the general public as an effective medium for immediate advertising and for the transmission of important community news while it is still news. We will endeavor to publish the Bulletin six days a week and continue it as long as we feel the service it gives justifies the existence. The Bulletin is not attempting to take the place of a newspaper, for its miniature size makes it impossible, and all the news matter will necessarily be very brief but sufficient to be informative. We chose the modest name of Bulletin to give it a proper label, but in function we hope it will service as effectively for its purpose as a daily newspaper. The advertising columns are open to all for legitimate purposes. If we fail to solicit your advertising, do not feel slighted. Serving as editor, printer and devil it will be impossible for the advertising manager to call on every business house each day. The Bulletin is published for our mutual benefit. Use it as often as your need justifies. We gladly publish notices of your club meetings, and will appreciate any news suitable for this type of paper.”

The original Bulletin was the size of a Reader’s Digest.

The paper was changed to its current size, 8 ½ by 11, in 1955 after the Tryon Daily Bulletin bought the Polk County News, Vining Sr.’s one time employer.

“The present size does not meet the demands of a growing community,” Vining Sr. said in the 25th anniversary edition in 1953. “Many progressive advertisers want larger space. There is not room for many pictures and longer articles. The increased circulation has presented some production problems, which we can’t master with present equipment. We solicit your cooperation in making the adjustment when the time comes, and assure you of our constant effort to give you the best newspaper service possible with the means available.”

Cliff Berryman, noted cartoonist for the Washington Star, creator of the famous Teddy Bear and a Pulitzer Prize winner, gave Vining Sr.’s personal column an identity by drawing the Curb Reporter logo, which is still used today. The logo features a Keystone Cop telling Pop Vining with a reporter’s pad and pencil in hand to, “Move on buddy!” The cartoon was created in the 1930s to depict Pop Vining going up and down the street every day to get advertisements and to ask what news was going on that day. 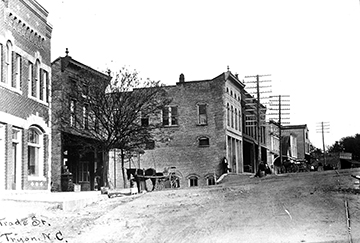 The Bulletin’s distinctive arched window makes it recognizable in these photos of Tryon’s Trade Street through the years. (Photo from the collection
of David Widdicombe)

The Bulletin moved to the old Bank of Tryon building in 1935, which is where it is still located today and is listed on the National Registry of Historic Places. For many years the Bulletin operated in the building and shared space with other businesses, including a realtor’s office and a hair salon at one time. Vining Sr. bought the building in 1959.

Famous people made friends with the Vinings, including Lefty and Nora Flynn who threw the Vinings a party in celebration of their 10th anniversary in January 1938. “Pop” Vining wrote year later that “the Flynns did many nice things for Tryon people and always shared their friends with others, whether it was Lady Astor and the other Gibson Girls; Tim McCoy or Richard Adinsell, author of the ‘Warsaw Concerto.’”

In the 1940s, Robert Ripley met with Vining Sr. to talk about including the Bulletin in his “Believe It Or Not!” series. Ripley reportedly said that it is nothing to publish the world’s smallest daily newspaper, but to support a family with it for more than 10 years was indeed a significant accomplishment.

In 1950, Seth Vining Jr. returned to Tryon and joined his dad in running the newspaper.

In 1976, Vining Jr. took over the Bulletin and from 1971 until his retirement in 1989, he and his wife Bos Vining, who also worked at the paper, took no vacations.

Vining Jr. once said that he thought the town is much better for the Bulletin being here and taking part in the community.

“And that to me is the satisfaction of doing it,” Vining Jr. said.

Vining Jr. also spoke of hard times, especially during the Depression, when people would trade produce for subscriptions.

“No one had money,” Seth Jr. said, “even the rich people didn’t have money. Anything that you had that we could use, we took in.”

“People would move to town and we would interview them,” Vining Jr. said in the 1980s while being interviewed by a television news station. “We’d tell where they were from, what they did and what brought them here. It sort of gave them an introduction to the community.”

Vining Jr. also said his dad had a philosophy he thought was very good.

“Dad had a philosophy that I thought was very good and we tried to continue,” Vining Jr. once said, “and it was to try to get the good news. You really don’t need a paper for bad news, everybody hears about it before you can even get it off the press.”

Vining Jr. also said the Bulletin has always been the community’s newspaper. If someone sent something in, whether it was a club event or a birth announcement, the Vinings ran it.

On Nov. 17, 1989, the Vinings sold the Bulletin to the Jeff and Helen Byrd family and a group of family friends, who ran the paper for the next 20 years.

Once asked in an interview about the small size of the newspaper, Jeff Byrd said the small size is “our claim to fame. And the people love it. So why mess with a good thing?”

Kevin Powell has been the general manager since January 2017.  •