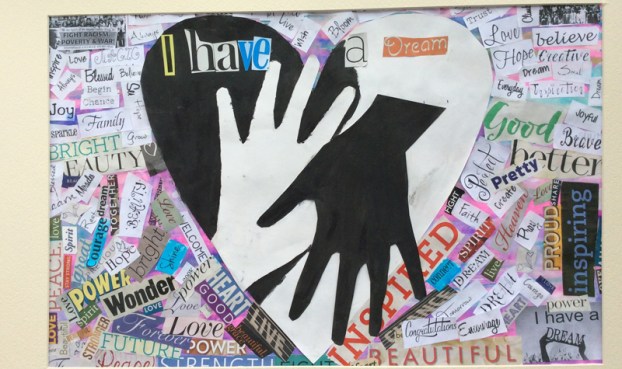 TRYON – The importance of the civil rights movement in the community and why it’s important to support equal rights, was the theme for the 2018 Thermal Belt Friendship Council Creative Arts Competition. Students from Landrum and Polk County middle schools submitted essays or original works of visual art to illustrate the theme.

The essay competition was limited to 1,500 words and was judged on the subject matter and how it relates to community and equal rights, originality and creativity, how the writer develops the theme along with organization, grammar, punctuation and spelling.

Contest rules limited visual art pieces to 22 by 28 inches. Judges looked for originality and creativity, how the theme was developed, how it related to the community and equal rights as well as the technique used.

“The competition is to encourage students to think about the impact that Martin Luther King’s efforts have on their lives and to engage the students and their families in our MLK event,” said Edgar who has organized the competition for four years. The competition was part of the MLK celebration held Jan. 20 at the Tryon Fine Arts Theater.

Edgar added, “I have been involved with programs that integrate arts in the school curriculum for many years and understand the impact that utilizing arts has on learning. The addition of the creative arts competition to the Friendship Council MLK celebration has engaged more students and their families with our event, and hopefully, inspired them as well.”

Awards for each category include cash prizes of $50 for first place, $25 for second place and $15 for third place. Edgar said this year they also awarded several honorable mentions with a $10 cash prize. Below is the winning Essay:

What Needs to Change IN Our Unjust World

Thomas Jefferson wrote these words on July 2, 1776​, ​“We hold these truths to be self-evident, that all men are created equal, that they are endowed by their Creator with certain unalienable Rights, that among these are Life, Liberty, and the Pursuit of Happiness.”

we aim? Are all people created equal? Equal rights, are they truly real? One way to show that Thomas Jefferson’s words are just an ideal in which we aim is the story of a young girl in 2010 who was shot for just wanting an education. The words of Thomas Jefferson may just be a ideal now, but has a chance of becoming a reality with you.

In the book, ​I Am Malala: How One Girl Stood Up for Education and Changed the World​, Malala Yousafzai, a native of Pakistan, states that girls should not be shot for just wanting to go to school like the young boys were privileged to do.

​Malala, still a young girl at the time of 2010, was speaking out against the Taliban. She felt that it was not right boys could freely go to school and girls could not. She felt the rights of girls in Pakistan did not exist, so she set off to change the minds of people and the Taliban. Malala recruited people to support her in her campaign for education for all, but not the Taliban. The Taliban was out for her.

One normal day, Malala got on the bus to go home. Everything is fine, until a man jumped into the back of the bus and asked, “Which one is Malala?” Then Malala was shot by the Taliban, and rushed to the hospital, thought to never wake up. Her injuries were so severe, she was transported to England

for the care she needed. To everyone’s surprise, she survived shots to the head and is now speaking out, stating, “That asking for an education is not a crime, it’s a right!”

Malala’s family was exiled from their home. They live in England today, where she continues her education and her free speech. She has become an advocate for women across the globe. Her suffering has given her the courage to fight against all odds.

She has gone on to speak out for everyone in every place to be given the chance to get an education, girls and boys both. Nine months after being shot by the Taliban, she gave a speech at the United Nations on July 12, 2013, at the age of only 16. She highlighted her focus on education and women’s rights, urging world leaders to change their minds and stand with her in her fight for education for all. She stated during her speech, ​“​The terrorists thought they would change our aims and stop our ambitions, but nothing changed in my life except this: “Weakness, fear and hopelessness died. Strength, power, and courage were born.​”​ (Kettler 2017)

She was awarded the Nobel Peace Prize at the age of 17, making her the youngest person to ever win the

Nobel Peace Prize. She is still on her mission to change the minds of people across the globe that everyone deserves an education.

At the age of 18, she opened a school for Syrian refugee girls in the country of Lebanon. She has spoken her message to news organizations, world leaders, and entertainers. She continues to be a voice that will not be silenced, even though, she remains a target for the terrorists.

If Thomas Jefferson were alive today, he would join the fight for equal rights, just as he did in 1776, when he wrote the Declaration of Independence to start a country where all men (and hopefully, he omitted women, by mistake!) are created equal and every man or woman has the right to life, liberty, and the pursuit of happiness.

Jefferson is not alive today, but has left his ideas, and now it is our job to continue this journey. We the people of 2018, can make his ideas a reality by spreading the word to end the actions of discrimination and inequality. We can write pamphlets and essays, just like this to show that it is not right, not fair, and just plain disrespectful to treat a woman differently than a man. We, males and females, are both human

beings and should be treated like we are equal and that we do have the same opportunities.

This challenging change has to start small, in your community, and mine. But,​ ​if we all rise to the fact

that there is injustice in this world, we can change the facts and make Jefferson’s dreams a reality. Now, all we have left to do is to put this plan in action, starting with our communities, then our nation, and then the globe.

The man behind the dream