The Purple Door: Our silence breakers

Time magazine recently named the “Person of the Year” as “The Silence Breakers” in reference to the women who had come forward to expose the sexual harassment that has been prevalent in our national society for too long.  These individuals set off a national reckoning over the epidemic of sexual harassment, hence Time Magazine has named them its 2017 Person of the Year.

I applaud Time for taking this step forward…. But it is really only the tip of the iceberg!

What is the rest of the iceberg? Domestic abuse. 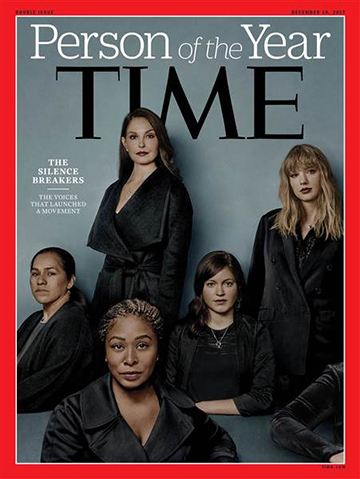 It is easy for me to write words on a page.  It is easy for me to tell people what they should be doing.  What is difficult, truly difficult, and takes an immense amount of courage, is for the victims and survivors of domestic abuse to tell their story.  Identification is not important (that can be hidden), their story is important because a story of domestic abuse is powerful and it awakens people who are not and have not been exposed to domestic violence.

Did you know that:

• On average, nearly 20 people per minute are physically abused by an intimate partner in the United States. During one year, this equates to more than 10 million people.

• Every 9 seconds in the US, a woman is assaulted or beaten.

• Intimate partner violence accounts for 15 percent of all violent crime.

What is difficult to gather statistics on are the victims of emotional abuse and economic abuse and the cycle of abuse that passes from generation to generation.  This brings up the question of “what is the effect of domestic abuse on children?”  Here are some eye opening statistics:

• 30 to 60 percent of perpetrators of intimate partner violence also abuse children in the household.

• One study in North America found that children who were exposed to violence in the home were 15 times more likely to be physically and/or sexually assaulted than the national average.

• The U.S. Advisory Board on Child Abuse and Neglect suggests that domestic violence may be the single major precursor to child abuse and neglect fatalities in this country.

If you are a victim and need help, there is an excellent local resource available to you, Steps to HOPE in Columbus, N.C. Call 828-894-2340 or email steps@stepstohope.org. There are wonderful, skilled staff that can help you, just contact them.