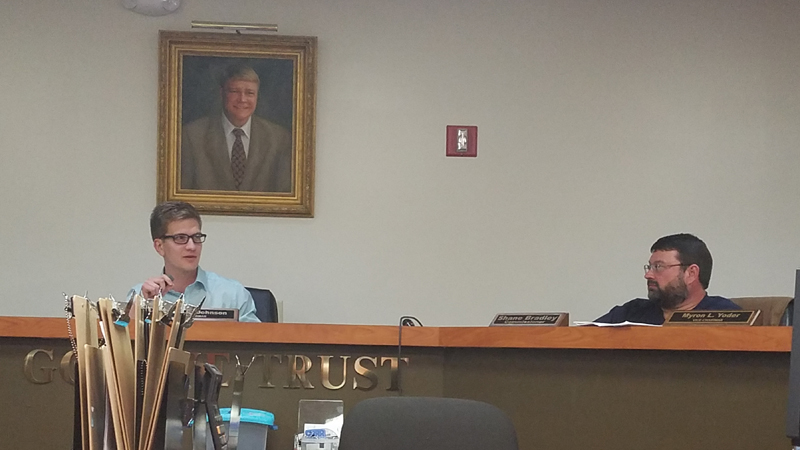 Polk County Commissioner Chair Jake Johnson and Commissioner Shane Bradley discuss their thoughts on whether the county should regulate golf carts during a meeting on Monday, Jan. 8. (photo by Leah Justice)

COLUMBUS – The Polk County Board of Commissioners has asked its attorney to draft an ordinance to allow golf carts on some roads in the county.

Commissioners met Monday, Jan. 8 and following a public hearing, with both comments for and against allowing golf carts, directed county attorney Jana Berg to draft an ordinance for the county to consider. During the Jan. 22 meeting, commissioners will also have a second public hearing and urged residents to attend to give their opinion on whether the county should regulate golf carts.

By state statute, the county could only allow residents to operate golf carts on roads that are 35 mph or less in the unincorporated areas of the county. Other stipulations include that the golf carts have to be inspected, that they are only operated by licensed drivers over the age of 16 and certain other features, such as being equipped with turn signals.

The county was presented a petition Monday night with 46 signatures in favor of regulating golf carts.

Mel Collins, of Green River Cove Road, approached commissioners last month asking for the county to allow golf carts. The state currently allows golf carts on roads 35 mph or less but Collins said the process to get a VIN number is $2,600 and it would be cheaper and easier for residents if the county regulated them. Collins said Monday, his father, who passed away Monday morning, purchased a golf cart for his family to maneuver from the river property to the cabin property up a steep hill. Collins said they used the cart as his “Pop” intended, then were told by a wildlife officer that it was illegal unless it was registered. He went to Rutherford County, one of the few places in the state to have it registered, and was told he couldn’t have a gas golf cart, and for an electric one he’d have to have a VIN number, which cost $2,600.

Pat Morrison, also from Green River Cove Road, said he had a golf cart and made it street legal. He said he lives in Saluda and since the city has a golf cart ordinance, he was under the impression it was legal, then was told he couldn’t use it. Morrison said he tries to help people in the area, such as replacing water filters or doing work they may need, and it was easy to just hop on the golf cart and run by and help them out. He also said a lot of fisherman could use golf carts to go fish because there’s not a lot of parking, plus, it’s better for the environment.

Grey Lancaster said he’s also in favor of golf carts. He said he went by his insurance company to see what it would take and it would be about $100. Lancaster asked commissioners to keep the process simple if they approve golf carts, suggesting requiring lights on the front and the back and a sticker issued from the county.

Angie Leffort, who lives on Catherine Drive in Columbus, said she is opposed to golf cart regulations. She said she doesn’t blame anyone for using them on their private property or the outskirts of town, but golf carts were meant to be used on golf courses, not public roads.

“They are not build to withstand an accident with an automobile, truck or any other thing like that,” Leffort said. “They do not have heavy bodies or roofs and were not meant to be used as public transportation.”

She asked commissioners to picture a golf cart coming out of Tryon Estates on Peniel Road and a teenager with friends coming around the bend. Most drivers go 5-10 mph over the speed limit, she said.

Leffort also said in September, the World Equestrian Games are coming and people will be taking scenic routes who don’t know the roads and that could be a problem. She also mentioned deer running into a golf cart, knowing what deer can do to an automobile.

“Our law enforcement has enough to do without the burden of policing golf carts and their drivers,” Burnette said.

Burnette said golf carts were made to be used on golf courses and lots of kids like to drive them.

“In my neighborhood I’ve seen children under the age of 10 driving golf carts alone and in a very unsafe manner,” Burnette said, “pulling out in front of me and me driving a car. Allowing operation on certain streets will only open a can of worms with other streets and roads requesting the same treatment.”

Commissioner Ray Gasperson read an email from Sharon Goettert, who said she has concerns. She said she lives on Golf Course Road which has seen an increase in traffic, that large trucks are common, as well as motorcycles and cars who travel well above the speed limit.

“The use of golf carts has become more common during the last year by a group of neighborhood kids for what appears to be transportation from one friend’s house to another,” Goettert said. “I do have concerns that sometimes these carts are carrying more kids than there is seating for and some are riding by standing and hanging on outside the seats. Another concern is the lack of lights on the carts when used during dusk or later. One neighbor expressed the concern that had his headlights not shone on a cart being used when it was dark, he could have easily hit the cart because it had no lights.”

Goettert asked if commissioners approve golf carts, that regulations for proper equipment, inspection of the vehicle, use of seat belts and lights and other safety regulations be developed and enforced as well as a minimum driving age. Also, she said it should be clear to citizens where golf carts can and cannot be used.

“Busy roads with narrow lanes and no guarantee of usable shoulders could prove to be a recipe for disaster,” Goettert said. “No one wants anyone to be hurt or responsible for an accident.”

Commissioner Tommy Melton read the state statute on golf carts and said he has concerns about the safety of citizens operating them. He said if the county is going to go forward with an ordinance the county should enforce the law.

“I just don’t want to see a fatality,” Melton said. “I just don’t know that putting golf carts out on the highways is the right thing to do.”

Commissioner Myron Yoder said the county has tractors, lawnmowers, mopeds and bicycles on the road. He said you have to have a driver’s license to operate a golf cart and it’s only legal on roads 35 mph and under. The state already allows the use on roads 35 mph or under, it’s just a question of whether the county is going to register them, Yoder said.

“What I’m saying is we have to look at the costs of inspections and how are we going to enforce the regulations,” Yoder said.

Commissioner Gasperson asked if the county moves forward would it be liable if an accident occurred. Berg said the county wouldn’t be any more liable for golf carts than for any other vehicle on a road in the county.

Commissioner chair Jake Johnson asked if the county would have petitions to include certain roads or approve an ordinance county-wide.

Gasperson asked if the N.C. Department of Transportation (DOT) would put signage on the roads indicating that golf carts are allowed. Berg said the DOT has said they will not put up signs warning the public of golf cart usage. She also said she asked the state for statistics on golf cart accidents and they were not aware of any accidents involving golf carts.

Berg said the state did mention knowing of a fatality in Myrtle Beach, S.C. involving a golf cart.

Johnson said the decision the county has to make is the state lays out the guidelines that the county at least has to enforce. Polk can make the regulations more restrictive, just not less.

Gasperson asked if the county does pass an ordinance can it restrict it to certain roads. Berg said yes, the county can specify which roads. And some roads, she said, the county could restrict to sections that are 35 mph or less, as some roads have different speed limits. She also recommended the county only allow golf carts from dusk to dawn, for golf carts to have reflectors and that drivers have minimum liability insurance to pay for damage or injury they may cause.

Johnson said he’s in favor of it. He said his initial knee jerk reaction was no, but residents can already register golf carts through the state and drive them on the road. He said for one, it’s going to save citizens money. He said the county needs to decide if it’s worth county time to do, who would manage it and who would inspect it.

Gasperson said if the DOT won’t put out signs, maybe the county could. He said he just doesn’t want to give the impression that everyone can do it and doesn’t want to make it open to just anywhere in the county.

Melton said he was hoping for a larger crowd at the public hearing. He suggested having another public hearing and having it at 7 p.m. instead of 6:30 p.m. like Monday’s hearing.

Johnson said he wants to see a sample ordinance with liability insurance required and agrees that the county should have residents petition to have roads added, not just a blanket ordinance county-wide.

Commissioners mentioned the inspection fee could be $100 with $50 annual renewals and discussed either the sheriff’s office or the tax and tag office being in charge of the inspections.

Commissioners asked Berg to bring a draft ordinance to the next meeting, scheduled for Jan. 22 at 7 p.m. and for extra copies to made for the public to follow any changes commissioners may make.

Yoder said commissioners have 46 people who signed a petition in support of it and they are from all over the county. He said the county can’t go in incorporated areas and it can only be on roads 35 mph or lower. He said he thinks the county is making it complicated for something that isn’t that complicated. There’s not many places they can go, Yoder said. He said when it comes to our equestrian friends, the county lets them ride horses on the road and he thinks it’s a very good thing for the county’s retired citizens.