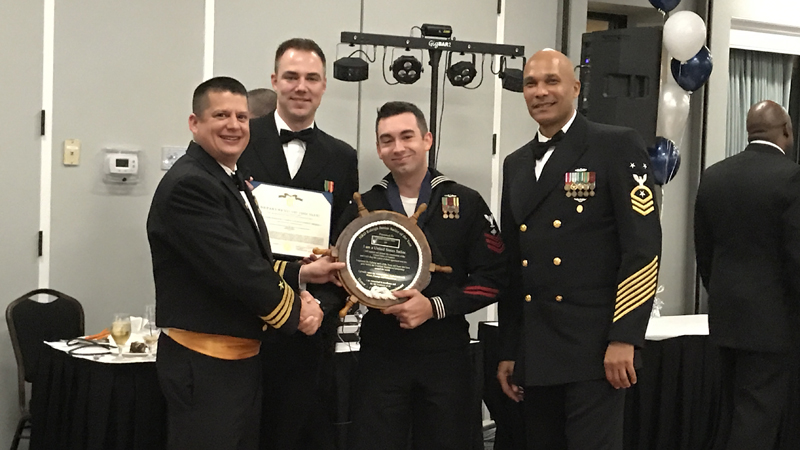 The recognition is awarded to Junior Sailors who are considered a “Model Sailor” or someone who exhibits a positive work attitude, who is a hard worker and has a great “military bearing.”

Annis, his wife Brittany and their two sons, Zane and Chance, traveled to Myrtle Beach for the awards ceremony on December 15. In addition to the Junior Sailor and Winner’s Circle recognition, Annis received a promotion to E6.

Annis has served in the Navy for eight and a half years and currently works as a Navy recruiter in Spartanburg for the Raleigh District. In addition to working as a recruiter, Annis served on board a submarine in the Mediterranean, Europe and the Middle East. He is also recognized as a Station Lead Petty Officer, which means he could run the whole recruiting station in Spartanburg.

Annis’ wife, Brittany, said she was not surprised that he received the awards. “He is one of the hardest working people I know,” she said, adding that he not only works at his job in Spartanburg, but also helps her with the store and works on their farm.

“I am so proud of Carson and all of his accomplishments,” Brittany 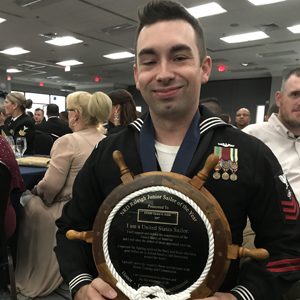 Petty Officer First Class Carson Annis of Green Creek was named Top Junior Sailor of North Carolina, was inducted into the Winner Circle for exceeding recruiting goals for 2017, and was promoted from an E5 to an E6 on December 15. (photo submitted by Brittany Annis)

said. “He somehow just continues to accomplish goals and excel at everything he takes on.” She also noted that, while work keeps him very busy, Annis always puts his family first.

Though he always wanted to go into the military, Annis did not come from a military family. He grew up in Hudson, N.C. near the Hickory area and had a four-year scholarship option.

“The military gave me better option,” he said. “I picked the Navy because I felt it was the right fit, and I really liked the idea of submarines.”

Annis will be leaving active duty this March and transferring into the Navy Reserve. During his eight years in the Navy, Annis earned a bachelor’s degree in business from Post University and is looking forward to working in that field.

“It [the Navy] was everything I hoped it would be and more,” he said. “I gained great  a work experience, and a better education than I would have gotten otherwise. I also gained some life lessons I’ll remember to the day I die. I loved it and recommend it for everyone.”