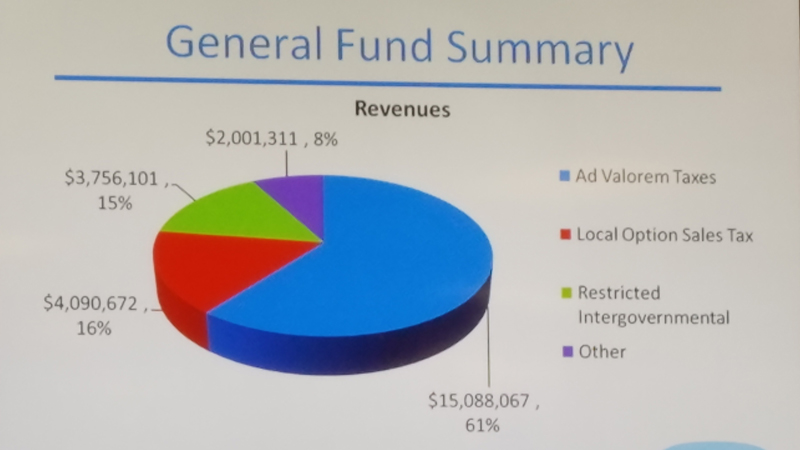 Polk County received its annual audit for fiscal year 2016-2017, which ended June 30, 2017. Pictured is a graph of revenues the county receives, with the majority coming from property taxes.

COLUMBUS – Polk County had another healthy year, according to its annual audit report, finishing with a 29 percent fund balance and departments ending with positive revenues over expenditures.

The Polk County Board of Commissioners met Dec. 18 and heard from Tonya Marshall and Dan Mullinix, with Gould Killian CPA Group, P.A., who performed the county’s audit for fiscal year 2016-2017, which ended June 30, 2017.

Financial highlights for the county include that the county’s net position increased by $3,065,977, primarily because of continued operating efficiencies, a 2-cent property tax increase, a slight increase in the county’s property tax collection rate and increases in all revenue sources for an overall revenue increase of approximately nine percent, according to the audit report.

Capital assets of Polk County increased overall by $5,389,012 after depreciation, according to the audit, mostly because of the construction and land costs incurred on the new law enforcement facility.

The county’s annual debt also increased last fiscal year by $11,725,520, from proceeds the county received from a loan to build the new law enforcement center.

Mullinix said last fiscal year (2015-2016) the county had some findings for the department of social services (DSS) because of a required software transition last year. Marshall said everyone had issues implementing the new system, it required hours of training, and a lot of “bugs” had to be worked out. This is the second year Polk DSS is using the new system and has implemented its corrective action plan, according to Marshall.

County manager Marche Pittman said there was a lot of finger pointing when the system was rolled out, and the system the state put out was broken. He said the issues were certainly not the county’s fault.