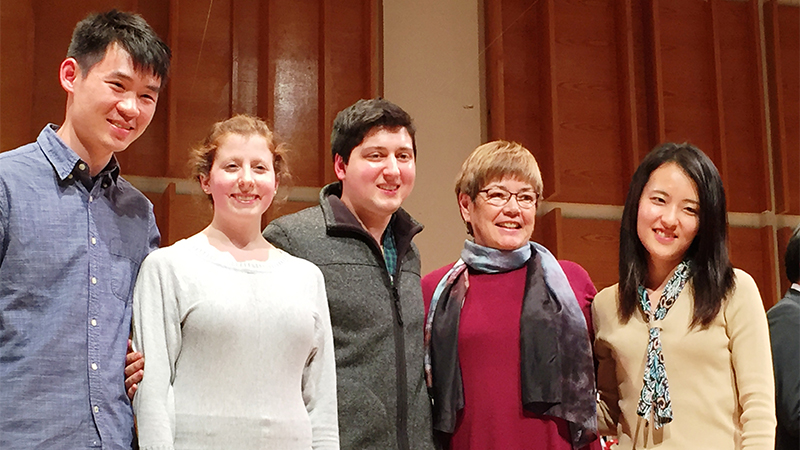 Pinchas Zuckerman, Emanuel Ax, Murray Perahia, Carter Brey, Dawn Upshaw, Jean-Yves Thibaudet, Paula Robison, Jeremy Denk, Eugenia Zuckerman, the Borromeo String Quartet. Aside from being excellent musicians known all over the world for mastery of their art, these artists have one other thing in common: they were part of the Young Concert Artists program at the outset of their careers.

Founded by Susan Wadsworth in 1961, Young Concert Artists, Inc., is dedicated to the discovery and nurturing of young artists of exceptional talent and promise. Even with extraordinary talent, however, young musicians encounter difficulties in establishing themselves on the world stage. Young Concert Artists gives young artists, who are chosen through YCA auditions, debut recitals in New York, Washington, D.C., or Boston. In addition, these young musicians, ranging in age this year from 17 to 29, receive management services that include publicity materials, promotion, and career guidance.

And now for the adventure:

The Tryon Concert Association has a history of engaging YCA performers. Starting in 2011, TCA has booked four YCA musicians, and last year’s series included violinist Paul Huang, a YCA audition winner. Recently Gwen Suesse, TCA president, and Carole Bartol, TCA vice-president, traveled to New York for the YCA auditions. As a presenter of concerts, TCA awarded a performance prize to the Omer String Quartet, which means Omer will be a part of the TCA subscription series in the 2019-2020 season.

Gwen explains, “As presenters, we at TCA believe we have an obligation to help future artists launch their careers. Young Concert Artists finds the best, but needs presenters like Tryon Concert Association to actually book these artists.”

This year’s choice, the Omer String Quartet, was founded in 2009 at the Cleveland Institute of Music and is composed of violinists Mason Yu and Erica Tursi, violist Jinsun Hong, and cellist Alex Cox. The quartet has performed in American and Canadian cities as well as at venues in France and Italy. Winners of many prizes, now including the Tryon Concert Association Prize, these musicians have been praised for playing with a “sense of discovery and adventure, but also with considerable finesse.”

Congratulations to Gwen and Carole for discovering young talent in the Big Apple. It is just possible that the two enjoyed New York’s restaurants and Carnegie Hall as well as the YCA auditions. Congratulations also to Omer String Quartet for winning the Tryon Concert Association Prize. We look forward to hearing these fine young musicians in concert.