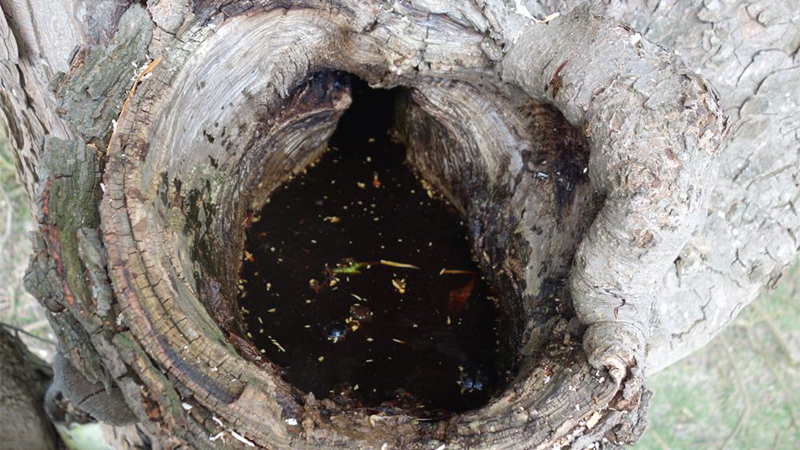 In a joint effort to expand the knowledge and understanding of the flora and fauna of Polk County, Conserving Carolina (formerly Pacolet Area Conservancy (PAC) and Carolina Mountain Land Conservancy (CMLC)) and botanist, David Campbell, need your help in locating this month’s “Polk County’s Most Wanted-Habitat,” a very unique and interesting microhabitat – tree holes.

Tree holes, sometimes referred to by the less appetizing name of rot holes, are often encountered on large, mature trees.  Although occurring more frequently on deciduous trees, tree holes may also be found on coniferous trees.  Organisms that depend on rot holes and dead wood are referred to as being ‘saproxylic’ by biologists.

As many readers may be aware, tree holes provide critical habitat for various species of vertebrates such as birds, bats, and mammals.  However, many of our most interesting, rare, and poorly documented invertebrate species are critically dependent on tree holes as well.  Many tree holes contain water, rotting leaves, and other organic debris which provide nutrients for an entire community of microbes, fungi, and invertebrates.  The biodiversity contained within a single, large, water-filled tree hole can be immense – a person with a compound microscope could spend many weeks just studying the microbial contents of such a site.

Spectacular species of Hoverflies (Syrphidae), some of which are incredible mimics of stinging wasps or bees, lay their eggs and develop as larvae inside tree holes, or sap runs exuding from tree holes.  The Hoverfly larvae will filter-feed on the microbes suspended in water, in much the same way that a whale feeds on plankton.  As well, some of these fly larvae (referred to as rat-tailed maggots), obtain oxygen from long siphon like tubes that extend from their posteriors to the water’s surface – truly fascinating and bizarre.  Hoverflies frequent sunny patches near tree holes during the day and may also be found feeding on the nectar and pollen of nearby flowers.  Look carefully, as many Hoverflies do not look like flies at first glance; they appear to look more like bees or wasps.

Beetles are also well represented in the saproxylic fauna – Stag Beetles (Lucanidae), Long-horned Beetles (Cerambycidae), Jewel Beetles (Buprestidae), and many other genera are to be found in and around rot holes.  One of our most interesting species of beetles associated with tree holes are the so-called Russian Leather Beetles in the genus Osmoderma (part of the Scarab family).  Russian Leather Beetles are large, black to purplish-black, and lustrous.  As their name suggests these beetles smell like leather, possibly as a result of pheromones to attract a mate.  On occasion, the smell of the beetle may be recognized before even seeing the beetle!  The smell is actually quite pleasant and it lasts for years, even on specimens pinned for collection.  Some members of the genus Osmoderma are protected in Europe (as are many saproxylic invertebrate species).  The two species likely to be encountered in Polk County, Osmoderma eremicola and Osmoderma scabra, are not common, but they should occur here.  Look for these beetles in and around large tree holes in Oak, Beech, Maple, or Basswood.  Sometimes they are also attracted to lights at night.

The next time you are strolling through the woods, keep your eyes peeled for tree holes, particularly on a sunny day in the spring.  You may be rewarded by the site of some of our rarest and most enigmatic invertebrate species.

If you know of any tree holes or have any observations from them, please let us know!  Photos, comments, or questions may be e-mailed to Pam Torlina at Conserving Carolina, 828-859-5060 or pam@conservingcarolina.org.

Conserving Carolina, your local land trust, is dedicated to protecting and stewarding land and water resources vital to our natural heritage and quality of life and to fostering appreciation and understanding of the natural world.