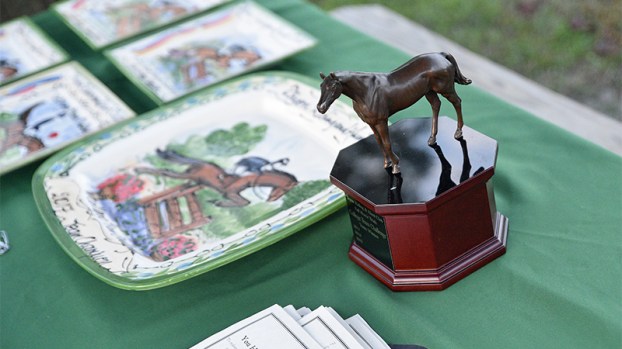 A Perpetual Trophy was unveiled for the College Team Challenge.

Tryon Riding & Hunt Club’s 42nd Annual Horse Trials were a big success, with 124 riders from 11 states competing at FENCE. That’s an increase in entries of 30 percent over 2016, with a date change to October being well received.

TR&HC also added some new elements to its decades of tradition. One unique experience was the chance for competitors – and fans – to do a cross-country course walk led by local rider/trainer Eric Dierks and international 4* eventer and Grand Prix show jumper Doug Payne. Doug was at Tryon International Equestrian Center for the Jumper classes and came over to FENCE to be part of the Horse Trials action.

A new Perpetual Trophy was introduced for the College Team Challenge, with the University of Georgia winning the honor of being the first team engraved on it. College teams also competed in a “Tack Stall Decoration” contest, which was won by the University of South Carolina – Aiken.

The entire event ran smoothly under the management of Organizer Molly Bull, in her first time leading the TR&HC HTs. She was ably assisted by Control Ann Haller and Announcer Mark Lehner. More than 80 volunteers helped in all phases of the Trials, led by TR&HC board members.

Board member Terry Lynch oversaw all aspects of the HTs and was gratified by the response from competitors. “We were really happy with our 2017 event and are already making plans for next year,” he said. “Among our goals will be to further strengthen the Starter/Novice/Beginner Novice cross-country courses. That’s where most of our participants are, and we want to make this course at FENCE as fun and interesting as we can for the younger riders and those just entering the sport.”

Horse Trials were introduced to Tryon equestrians in the 1960s by Anne “Tippy” Brown and her husband, Harry Brown, DVM, Polk County’s first veterinarian. The Browns, who moved to Tryon from Ohio, competed in the Southeast’s first-ever Horse Trials, held in Pendleton, S.C., in 1960. Harry took the “Low Score” trophy in the Preliminary Division and the Browns had such a good time they decided Tryon needed an HT of its own.

The Browns first hosted the HT on their own farm before moving it to Harmon Field a few years later. Jumping and dressage were held on the showgrounds and cross-country was held on an old Hunter Trials course at Brannon’s Farm just across the river, which competitors had to ride through on their way.

The Trials were interrupted for a few years when the Browns moved to Camden for Harry’s career, but they revived them with TR&HC when they came back in 1974, and they’ve been an annual event ever since. Harry also donated his original “Low Score” trophy to TR&HC, of which he was a longtime member and past-president. It’s been used as a perpetual trophy for many years.

The Trials remained at Harmon Field until the opening of FENCE in 1985 provided a single venue for all three phases. The 43rd Annual Horse Trials will run there on October 20-21, 2018. •

When it first started 25 years ago, the River Valley Pony Club (RVPC) was known as TLC Pony Club (for... read more