I’m Just Saying: Do all cats go to heaven? 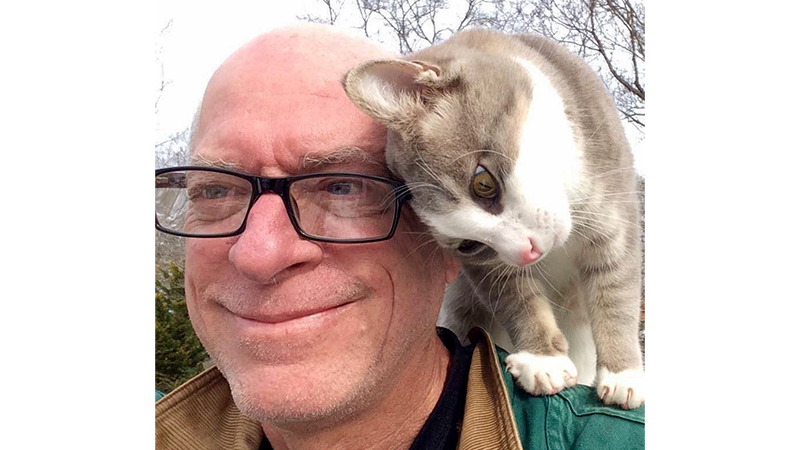 When Paul declared he had experienced not so much a sign, but an actual visit from a cherished pet, I looked up with a start.

You have to understand that in the 27 years we have been together Paul has only recalled two dreams and he didn’t actually recall them, but leapt to his feet on the bed in a panic during the middle of them.

‘OJ Simpson’s climbing through the window!’ he yelled, then immediately realized that while the trial was being broadcast non-stop on television, that particular night in our West Hollywood home was relatively quiet and safe.

His second nightmare also included people climbing through the window, all armed with cameras and snapping photographs.

In the 25 years that followed, nothing. Paul is the deepest sleeper I’ve ever known and falls into REM sleep as soon as his head hits the pillow. If he indeed dreams he has no memory. And being a rather methodical Virgo, he is very much a detail oriented and organized chap. I’ve been known to jokingly refer to him as ‘Ward Cleaver,’ from the ancient ‘Leave it to Beaver,’ complete with cardigan, the only feature missing being his contentedly puffing away on a pipe.

So when Paul announced, “I had something really weird happen last night,” it had to be significant.

And it was. A week before Christmas, Paul had lost the love of his life, Buster.

Buster was more dog than cat as he would come running up to greet him as soon as he heard his car come down our long, traveled drive, yowling excitedly by the door. He was also inherently disobedient. Regardless of how many times he was ordered, or squirt with a water bottle, he would jump on the kitchen counter and eat or chew through any wrapped food. He once found a vet’s wrapped deli sandwich she had put in the tackroom of the barn to eat after seeing to one of the horses. When she went to retrieve it, she found Buster, having chewed through the aluminum foil, devouring it.

Without missing a beat Buster turned to look at her and burped.

He was a naughty cat, Paul adored him, and quietly grieved the loss.

“It was about 2 a.m,” Paul began, “and a cat jumped on my legs and for a second, inserted its claws on my legs to wake me up. I thought it was Duke or Mia but they were asleep on either side of me.”

(It should be inserted here that Paul was sleeping downstairs in the guest room as he had had his knee scoped the Friday before and couldn’t yet manage the stairs to the master bedroom.)

“I know,” Paul nodded, “But a cat jumped on my legs, woke me up, and I saw Buster sitting on the end of the bed. I saw him as clear as day. And to the left was the outline of a Jack Russell, which could only have been Bonnie, and several cats behind them. They were all purring and rubbing their heads together, and Bonnie was rubbing her head against them…”

He paused for a moment and smiled. “Honestly, if they could have had noisemakers, they would all have been blowing them. The only way I can put it was that they were grinning—big happy faces, every one of them”

“Buster came to say goodbye,” I said, believing it all wholeheartedly.

“Buster came to say goodbye,” Paul echoed, “and to tell me he was alright. Happy. Throwing a party!”

Perhaps it was merely a dream, but it really doesn’t matter because the comforting emanation was like a balm for Paul’s grief and a warm wave of affection seemed to settle over what had felt like a rather empty house as we had mourned Buster’s larger than life presence.

Do all cats go to heaven? I suppose that remains to be debated. But Paul will tell you he knows for a fact that they all come to the foot of your bed.