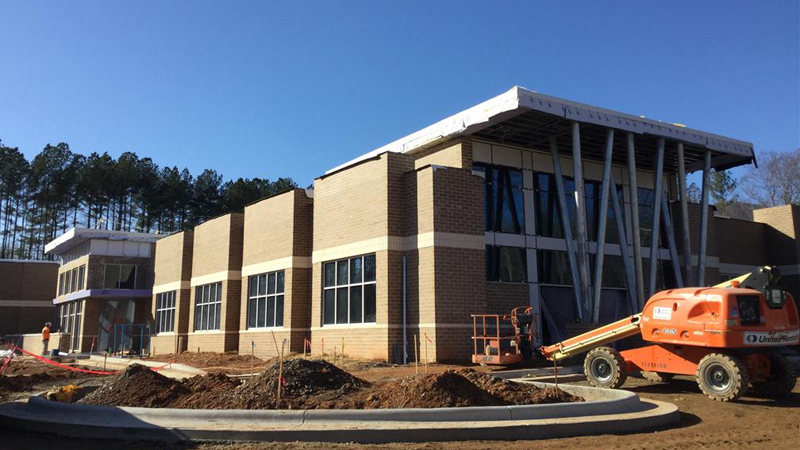 Polk County’s new law enforcement center is now expected to be complete the beginning of February 2018 after weather and deliveries delayed the construction by about a month. (photos submitted by Moseley Architects)

COLUMBUS – Polk County’s new law enforcement center has been delayed again because of snow and rain.

The latest expected finish date is the first of February 2018. It was previously expected to be complete in January and originally December.

The Polk County Board of Commissioners met Dec. 18 and heard from Paul Luzier with Moseley Architects.

The county also approved its first change order to the project for $36,367.

The change order includes changing a subcontractor to do the smoke testing.

Luzier said Moseley had concerns over the original subcontractor for some testing so the project was rebid.

On the schedule, Luzier said the project is approximately 85 percent complete. Weather and deliveries is the cause of the delay, Lukier said.

The change order money will be taken out of the county’s contingency for the project.

County manager Marche Pittman said change orders so far have only been about $25,000 and that’s not much on a $9.6 million project.

Commissioners Tommy Melton and vice chair Myron Yoder expressed concern that the county is having to pay for something missed by the contractor. The original subcontractor did not bid enough for some of the testing. Luzier said not everything was included and Moseley didn’t want to get a contractor to take short cuts and the county doesn’t find out about those short cuts until six months down the road and have issues in the building.

County chair Jake Johnson said it’s unfortunate that it happened but the county is fortunate the mistake was found now instead of down the road.

Yoder asked if there is any responsibility on the contractor, Cooper Construction.

Luzier said it’s not Cooper’s qualifications that didn’t check out. Moseley Architects stepped in and said they didn’t want that particular subcontractor on the job because of past issues.

Commissioner Ray Gasperson and Pittman spoke of several savings on the project so far, including inspections and that Polk’s jail administrator has been on site every day.

“I feel like we have saved significantly, several hundred thousand dollars at this point,” Gasperson said. “This is unfortunate but at least it was caught now.”

Polk County took out a $13.5 million loan to construct the new law enforcement center, which will include a new jail and sheriff’s office.