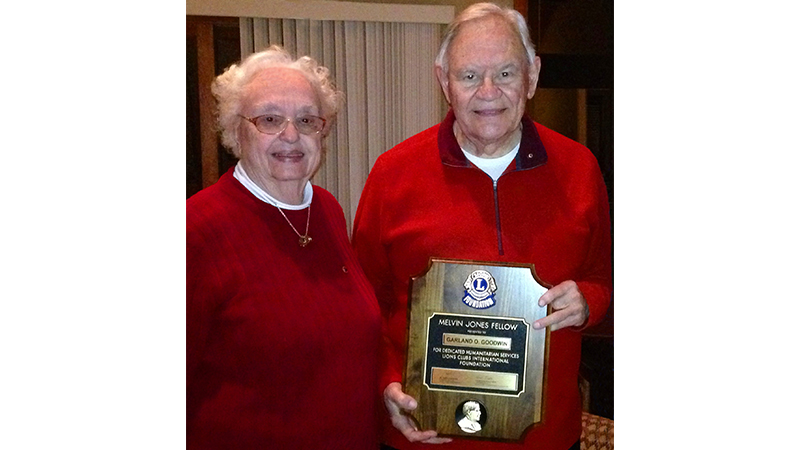 Lion Garland Goodwin was presented with the prestigious Melvin Jones Fellowship award at the December meeting of the Columbus Lions Club.  Lions Clubs worldwide recognize outstanding individuals by bestowing on them this award named for the founder of Lions, Melvin Jones. This award is the highest form of recognition that a Lion can receive for their charitable work.

Lion Goodwin has been a member of the Columbus Lions Club for over 23 years.  Almost immediately after joining he became club secretary, arguably the most challenging officer position.  Subsequently he led the club as president (more than once), served as treasurer, and is currently secretary again. He and his wife Fran (current president of the club) are in charge of the vision screenings the Lions hold throughout our community using the Spot camera.  This is a new technology that allows the screening not only of adults but also children as young as 6 months old.

Before becoming a Lion, Goodwin was valedictorian of his class at Tryon High School and later received a mechanical engineering degree from University of Texas in Arlington.  He and Fran married and raised their two children, Sharon and Thomas.  After a fulfilling career as an aeronautical engineer, he returned home to Polk County to retire.  He is past president of the Polk County Historical Association, has been a member of the Piano Technicians Guild for over ​40 years, and writes the Remember When columns for the Tryon Daily Bulletin.  He has authored three books that reflect on his life growing up in Polk County during the 1930s and 40s.  Today, he continues to embody the Lions’ motto “We Serve.”