Wolverines bounce back in overtime to ground Eagles 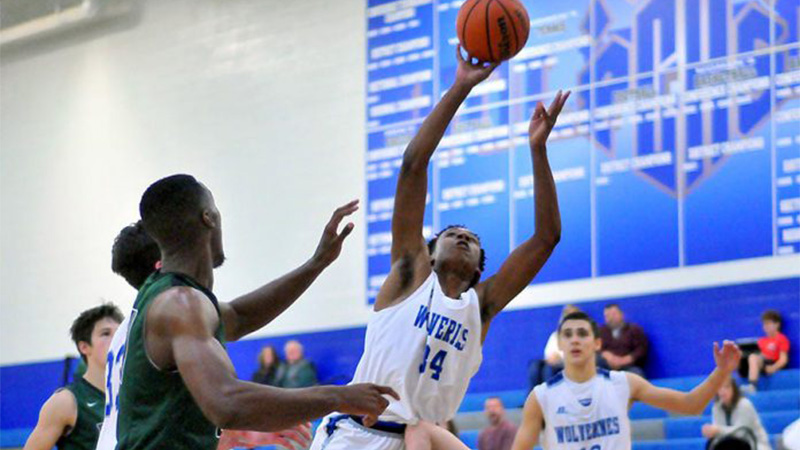 Polk County’s Markell Lipscomb works inside for an easy basket in second-half action in Tuesday’s win.

Polk County overcame a bit of adversity – and a lot of East Henderson’s David Houser – on Tuesday.

The Wolverines saw an 18-point third-quarter lead evaporate, but bounced back to hand the Eagles an 84-81 defeat in a non-conference boys basketball battle at Polk.

Houser had much to do with East Henderson’s rally, scoring 30 points in the second half and finishing with a career-high 47 points before fouling out early in the overtime period. He was one of six players on both teams to foul out before the game ended.

A key defensive stand helped Polk County (2-4) make it into overtime, and the Wolverines capitalized. Clark Phipps’ layup with 1:57 left gave Polk the lead for good, and the Wolverines held on for the win despite going 5-for-14 at the foul line in the extra period.

“I told them at halftime that we needed to maintain things,” said Polk County head coach Antoni Staley. “The kids got a little lackadaisical at the half. I kept telling them that it’s not over with. I don’t relax until I hear that buzzer.

“Lot of team unity tonight. The team is coming together and owning mistakes and everybody is competing.”

With Seth Hardin and Markell Lipscomb controlling the inside early, Polk County opened the second quarter with an 11-2 run and built a 43-29 lead at halftime. The margin continued to grow and reached its zenith with 2:27 left in the third period on Amir Gary’s 3-pointer, giving Polk a 54-36 advantage.

But Houser began to heat up. He scored 16 points in the quarter and sparked a 13-0 East run in the final two minutes to cut the deficit to 54-49 at the end of the period. Phipps opened the fourth quarter with back-to-back jumpers to push the lead back to nine, and the Wolverines still led by seven with 4:13 remaining.

But Houser continued to score almost at will even as his fellow starters began steadily fouling out. His baseline jumper with just over two minutes remaining tied the score at 70, and he gave the Eagles (1-5) a 75-73 lead with 47 seconds left.

Lipscomb answered with two key free throws with 28 seconds left to tie the game. East then attempted to hold for the final shot, but Gary and Jaylon Bontrager teamed to trap an East guard and force a turnover with 4.5 seconds remaining, leading to the overtime period.

Phipps scored 22 points to lead Polk County, with Hardin adding a career-high 16 points, Lipscomb and Bontrager each scoring 13 and Gary finishing with 11. Jason Fox added six points an Elijah Sutton had three for the Wolverines.

Polk County is back in action on Wednesday, traveling to North Buncombe for a non-conference clash.