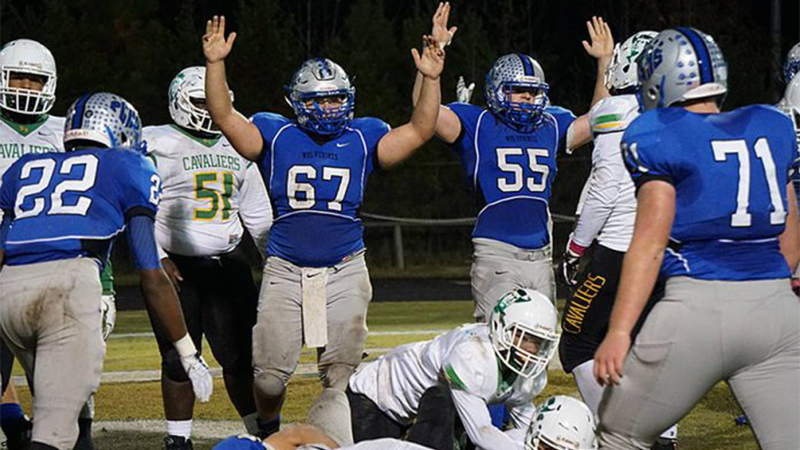 From start to finish, the 2017 football season was anything but ordinary for Polk County’s football program.

There was the return of longtime head coach Bruce Ollis, with former head coach Jamie Thompson stepping back into the role of defensive coordinator; a four-game midseason road trip straddling the end of non-confernce play and the opening of Western Highlands Conference competition; a late-season switch to a new offensive formation and quarterback.

Amid the less-than-routine was also a return to winning. Polk County finished with an 8-5 record, its first winning season since 2014, picked up its first playoff win since that same year and served notice that the program intends to return to the days of being a yearly contender for WHC championships.

“I had somebody ask me at a basketball game the other night, ‘Coach, what’s the most important thing a team has to have to be successful?’” Ollis said. “I’m sure they thought I would say speed or quickness. I said confidence.

“I think we’ve developed some of that confidence in what we’re doing on both sides of the ball. Certainly, like everybody else, we’ve got to get bigger, faster, stronger in the offseason. . . It takes a little bit of work to get where you want to be, and you can’t be afraid to apply that work ethic to move to the top of the heap.”

A new depth chart sits in the Polk County coaches’ office, and the Wolverines have already begun working toward being atop the heap in 2018. But 2017 won’t soon be forgotten.

The season largely played out as a drama in three acts. In the opening section, Polk County raced to a 4-0 record, including back-to-back shutouts of Landrum and East Henderson. A tough five-game stretch served as the second act, Polk going 3-2 in that span and a 25-7 loss to Mitchell on live regional TV helping spark the offensive changes that highlighted the finale.

The Wolverines’ concluding stretch of four games included losses at Mountain Heritage and Mount Airy, but also a defining 30-22 win over an 8-3 North Rowan team in the opening round of the state 1AA playoffs.

“I think the 4-0 start was incredibly positive,” Ollis said. “That provided a lot of confidence for our team. Certainly, we played a difficult non-conference schedule. We had tough losses to Pisgah and East Rutherford, but I think in the long haul, that made us a better football team.

“Three of our five losses, one came to a team that played for a state title in Mount Airy, and Mitchell and Mountain Heritage played in regional finals. If you look at it from that perspective, we were up against some tough foes. That doesn’t make it any easier to lose, but you know you’re losing to some of the best teams in the state.”

From preseason workouts through the end of the postseason, Polk County coaches noted the closeness of this year’s squad, the work ethic and determination to succeed that began with the 11-player senior class and ran throughout the roster.

“One of the things that also stands out was the incredible attitudes of our players and coaches throughout the season,” Ollis said. “We talked about getting on the bus and going on a business trip and taking care of business. They were that way.

“Great senior leadership. We didn’t have a lot of locker room issues or discipline problems, and you can’t place a value on that. As coaches, we relish having the opportunity to coach a football team and not have to worry about distractions outside of football. I think that had a lot to do with us being successful.”

The success included a much-desired win over Landrum, snapping a two-game losing streak in the border rivalry, and the win over North Rowan that Ollis labeled the high point of the season. Though the Wolverines fell behind 42-0 in their second-round playoff clash at Mount Airy, Polk County fought back with three touchdowns late in the game, including Dillon Knighton’s score on the final play of the game, sending both the Wolverines and the senior receiver out with a touchdown.

“One of the goals going in as a football coach, you want your players to put away some memories for a lifetime,” Ollis said. “I think we did that. Getting back on the winning track against Landrum, that’s a big deal.

“Our players stayed focused throughout the year. We had two times we had consecutive losses. We didn’t get down in the mouth, didn’t let our chins hit our chest, we kept looking forward.”

Polk County will likely go forward in 2018 with the same offensive look that it ended the season. Prior to the game at Mountain Heritage, the Wolverines adopted a flexbone look, with two slotbacks lined up on each side of the line. The team still ran the triple option and indeed used many of the same plays as earlier in the season, but moved the ball as well in the four games after the switch as did in any point in the year. The Wolverines finished the season with almost 3,600 yards rushing and more than 1,100 passing.

The offense will no longer have senior standouts Dillon Overholt or Knighton, among others, but with a core group returning led by Avery Edwards, who started at quarterback those final four games, Ollis is excited about the opportunity the new scheme will offer.

“We’re in the process of evaluating that, but we’re 95 percent sure going forward that we’ll stay with the flexbone, or double slot,” he said. “We think we’ve got the personnel that fits that style. You can do a lot of things in that offense. You can still go four wide. It lends to being very multiple, still, although the base part of the offense is being able to execute and run the option.

“We’ll look to expound on some other ways to throw the football, get in four wides sometimes and do some things that will enable Avery to throw the ball downfield. We’ve got some talented receivers coming back. In Bryson Seay, we’ve got a very talented fullback, and the fullback is the featured player in this offense in some respects. To get the maximum out of Elijah Sutton, we’re going to have to have some I formation plays in. Elijah is really more of a true downhill, dot-the-I runner. It’s great that we’ll have three of our people in the backfield back.”

Ollis feels that Polk’s program isn’t far away from enjoying the sustained succcess of a Mount Airy, Murphy or Tarboro. To get to that point, Ollis says it will take interest from the entire community, a commitment to growing the number of players in the program and building a Wolverine-first mentality.

“We have an opportunity next year to maybe two platoon up front on the offensive and defensive lines for the first time in a while,” Ollis said. “That will be out big push this offseason, to get as many one-way players as we can. It would be incredible to have 22 starters. I don’t know if we’ll get to that point, but that’s one of the directions we’re trying to move in.

“We’re getting involved with our middle school players in the spring, getting them over here to lift weights and finding out something about them. And also meeting with our youth football folks. Most of your successful programs, you’ll find out, it’s on three different levels, a youth program, a middle school program and then the high school program. They’ve all got to have a common vision and a shared vision as to where they want the programs to go.”

And no one is looking forward more to where those programs are going than Ollis, who has settled back comfortably into the program with high hopes of continued success in the years to come.

“Throughout the season when I talked to opposing coaches and saw fans, one of the things that they said more than welcome back was welcome home,” Ollis said. “That’s the way (Ollis’ wife Jane) and I feel. We’re back in a place that we love and cherish. I’m fortunate to be in this position. It’s a great place to raise your family and send your kids to school. I think the best is yet to come.

“There’s a little bit of buzz about 2018 already. I think that’s very positive.”