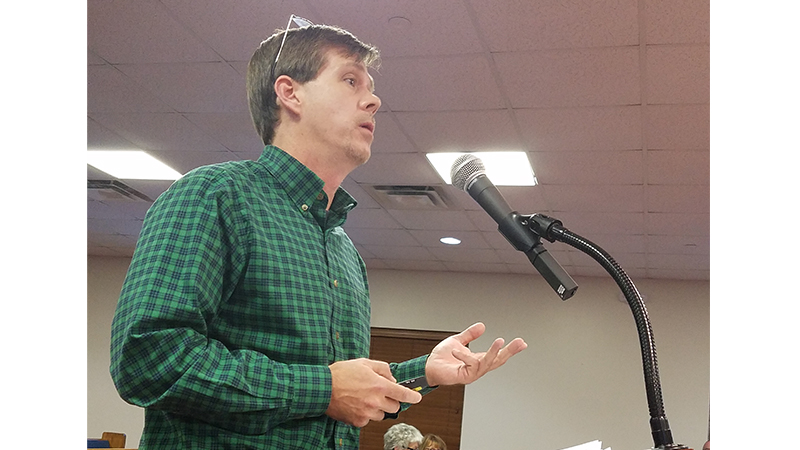 Polk County Board of Elections Director Cliff Marr detailed state statutes concerning ties in elections during the Dec. 4 meeting of the board of commissioners. (photo by Leah Justice)

COLUMBUS – Polk County Commissioners learned this week that determining elections by “lot,” or a random method such as a coin toss, is regulated by state statute in more election cases than first thought.

Columbus Town Council candidates Mark Phillips and Brent Jackson recently asked commissioners to sponsor a resolution to get the state law changed after Phillips won the election over Jackson by just three votes. The actual results weren’t known for 10 days after the election when three provisional votes were counted. The race very easily could have been a tie and if it had been, the race would have been determined by lot per state statute, such as flipping a coin or drawing a name out of a hat.

Polk County Board of Elections Director Cliff Marr reviewed some laws with commissioners during the county’s Monday, Dec. 4 meeting.

Marr said no matter what type of election, there are no third primary elections following a second. According to North Carolina statutes, in the case of a tie in a second primary, the parties would decide who they want to move forward in the general election. The reason is time, low turnout and costs, Marr said. He said there is usually a 3-5 percent turnout in second primaries.

A nonpartisan plurality election, which is the most simple method that the Towns of Columbus and Tryon and City of Saluda currently use, has the general election in November and any ties are determined by lot.

A nonpartisan election and runoff has the election in October and a runoff in November if needed. The winner must exceed the majority threshold or a runoff takes place. If there is a tie in the runoff, the winner will then be determined by lot.

Marr also reviewed recent municipal election results from both the 2015 and 2017 elections.

In 2017, Columbus Town Council’s third seat was determined by three votes. Another council seat in Saluda was determined by four votes. There were three other cities in 2017 where races were determined by one vote, including Spruce Pine, St. Pauls and Biscoe, according to Marr.

In 2017 there were two ties in council races with Garland, N.C. determining a tie by drawing colored pens, with the color purple winning, and in Manteo, N.C. the winner was determined by a coin toss.

“In a municipal election, it’s not uncommon to have a tie or low vote differences between candidates,” Marr said.

Marr said there is no perfect election system and the current legal climate is trending towards fewer elections, not more. Marr also asked if the tie is the issue or is the turnout the issue. Columbus had a 20.9 percent voter turnout this year, with 164 residents casting votes. Phillips won the council seat with 79 votes compared to Jackson’s 76 votes.

Marr said an election is more likely to have a tie in a low turnout and one way to address the risk of a tie is to increase voter turnout.

He said the municipalities can change the election type from a plurality to election and runoff system but the election would be held in October, which could hurt voter turnout.

Marr also said it’s not simple to put on another election. He said they take time and can be difficult depending on when that person is supposed to begin the seat. Marr said the elections office has to give time for absentee and military ballots and the public has to be informed. Winners of municipal elections in Polk County are sworn into office in December.

Commissioners had discussed sponsoring a resolution during its Nov. 20 meeting when approached by Phillips and Jackson but did not mention any course of action following Marr’s presentation.