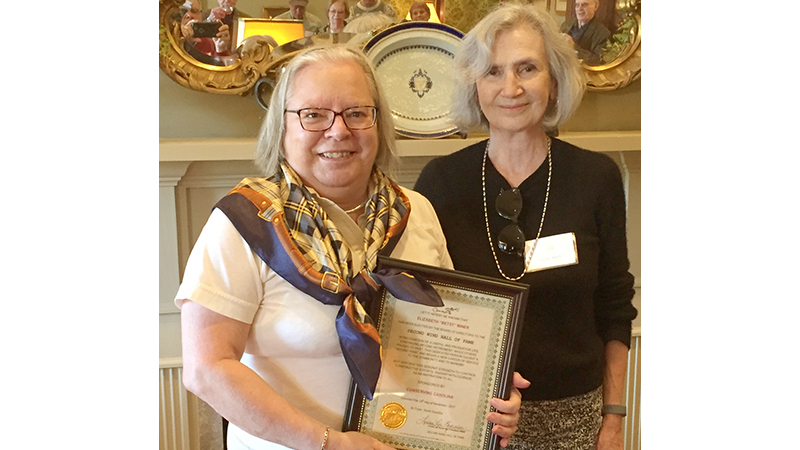 On Sunday, Dec. 3, Betsy Miner received the Second Wind Hall of Fame award at the annual holiday brunch of Conserving Carolina, formerly Pacolet Area Conservancy (PAC) and Carolina Mountain Land Conservancy (CMLC). The brunch was held at the home of Betsy and her husband Dewitt C. Miner III, better known as Dee. It was a fitting occasion to honor Betsy, since she and Dee have often served as host and hostess for PAC and now Conserving Carolina events.

The award reads in part, “In recognition of a useful and productive life, continuing beyond retirement. While others paused to rest, this dedicated person caught a ‘second wind’ and began a new career of service to the community and to mankind.”

Betsy grew up in Rochester, N.Y., where she and Dee went to high school together. After high school she earned a Bachelor of Arts from Malone University in Canton, Ohio and a Master of Arts in Religion from Eastern Seminary in Philadelphia.

For 20 years she was involved in the retail gourmet food and antiques business, which made her a natural to organize and put on special events, which she did for the Chester County, Pa. Chamber of Commerce. She was president of the Chester County SPCA as well as the Newfoundland Club of America and the Presbyterian Women.

When she moved to this area about 19 years ago she immediately got involved, along with her husband Dee, whose family have been in the area for some 40 years. She was a board member of Tryon Riding and Hunt Club and worked on the Horse Show and Race committees. She is a member of the Tryon Area AAUW, serving on the board and as founder and hostess for its Blue Stocking Benefit, which provided funds for local scholarships. For the Foothills Humane Society, she was founder and hostess for the Animal Fair, held on the grounds of the Miner home. She has served as president of Questers, a local antiques organization, and has been a member of the Carolina Carriage Club and the Old Tryon Foot Beagles Club. She has also been a volunteer for FENCE.

At the Pacolet Area Conservancy, Betsy served on the board and was the guiding force behind the Events Committee for many years. She organized and developed fundraising and other events, and trained volunteers to help. Her thoughtful and clear sense of mission and purpose provided leadership in all she undertook, always approaching tasks with energy and a smile.