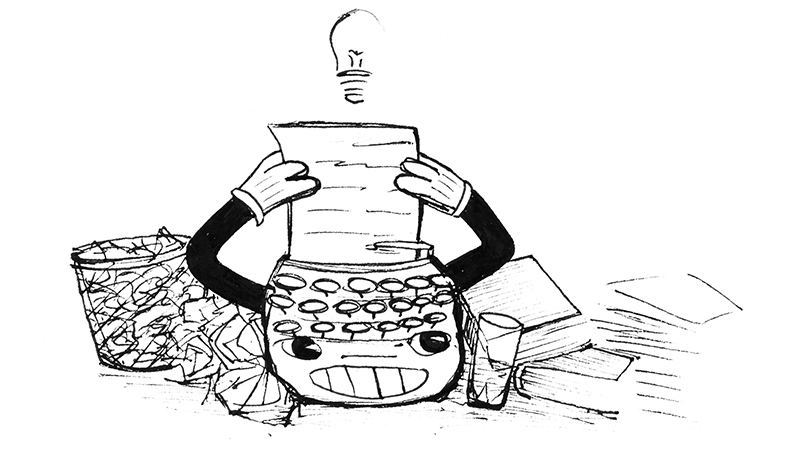 The lines can blur when writing about life

As a columnist for this magazine, I am obligated to write the truth, however embellished it might be at times. Admittedly, I sometimes have to remind myself that whatever topic I am cultivating for the month’s reflection, it has to be rooted in the truth. Recently, though, I had the pleasure of writing all the lies I wanted. For the first time in many years, I indulged in fiction writing. I got to make up wild and crazy stuff, whatever my wondering mind wanted to say. At least one person — a Hollywood director of horror movies — liked it enough to have it read aloud in public.

Actually, that’s not totally true. The task was to write a short story for a Halloween reading. It was a national writing contest, and the story had to include a ghost. It was not my intention to be truthful in any way, but old-school journalism dies hard, and before I realized it, I had written an ugly little story that had been passed down on my mother’s side of the family for generations. It was a story I had heard many times as a child, told by aunts and uncles, cousins and grandparents, and, of course, my mother, who I’ve always said should have been a writer. She had a true knack for taking a kernel of truth and growing a tangled jungle of elaborations. To my amazement, I took third place in the contest and was flattered that the panel of judges reading my words “blind” would take notice.

I would like to write more fiction, but after all these years of qualifying the facts with “He said” and “She said,” I’m just not sure I can write about something that never happened, except in my head. I tried it many years ago, when I was a karate student who read martial arts magazines. I had never seen any fiction in Black Belt magazine or Karate Illustrated, but I figured if guys like articles about how to kick, punch, and block, they might like a story about someone using those techniques in a fantasy fight. After setting up a rather flimsy scenario about a champion fighter with a bad attitude using his skills to bait overweight lowlifes into street fights, I detailed the blow-by-blow combat between the bully and his victim. It was bloody and gory, and morally challenging. But the editor liked it, and my short story was published in a national magazine. High-five!

Today, a few of those magazines are somewhere in the back of my closet in a box of old byline clippings. Old articles can be like old lovers: You don’t want to see them after time has taken its toll because it is so embarrassing.

It would be decades before I would try my hand at fiction again. At least with journalism, the article might be accepted on the merits of the topic, regardless of the quality of the writing. Like many short-work writers, I secretly want to write that Great American Novel that will be made into a blockbuster movie and a multi-season television series — and solve all of my money and ego problems. But like so many others, I fear failure. What if I invest the time and effort, and nobody likes it? The unwritten novel is bad enough, but the unpublished novel is even worse. I greatly admire people like Pam Stone who have the discipline, creativity, energy, and daring to follow their heart’s desire to write that story that rattles around in the back of their heads for years.

For now, I’ll continue to write about the world around me, the people, places, and things that are slices of life in the Great American Pie. The truth of the matter is that someday I hope to write a huge pack of lies and not cringe when I find it in my clip files. •

Steve Wong is a writer living in the peach orchards in Gramling, S.C.
He can be reached online at Just4Wong@Gmail.com.