Equestrian center prepares for the world 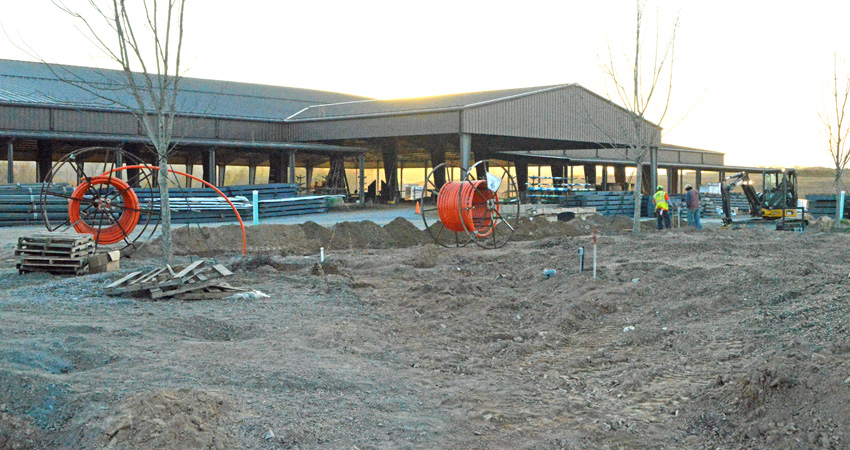 In preparation for the World Equestrian Games next year, the Tryon International Equestrian Center is expanding the current covered arena from 200 feet by 400 feet to 200 feet by 950 feet in order to include spectator seating. (photo by Catherine Hunter)

MILL SPRING – New arenas, new hotels, spas and three-story tents are all part of future plans for the Tryon International Equestrian Center (TIEC). Currently they are working on a four-star hotel to be part of an equestrian village, a new 20,000-seat arena, a larger covered ring and a new VIP and media pavilion. The three-story tent is another story.

TIEC Director of Community Engagement Katherine McMahon said while they are expecting approximately 500,000 people for the World Equestrian Games (WEG), to be held September 2018, they will only have to house approximately 900 horses from 72 different countries. Their 1,200 current stalls will easily handle the horses and TIEC is only responsible for housing 1,000 people. These 1,000 people include the athletes, judges and officials.

“Since the five-star resort will not be completed by next fall, we will not be responsible for housing the general public,” she said. The balance of the people coming to WEG, which includes owners, barn staff and spectators, will be housed within an hour and a half radius of Mill Spring, she added.

While TIEC does not expect to have the spa and five-star hotel, sponsored by Salamander Resorts, ready in time for the games, they will have completed the four-star hotel and condos which will include 200 more rooms and 100 condos. This will be added to their current cabins and hotel rooms now used as housing for the athletes and their immediate staff.

The equestrian village, including the new hotel and condos, will be located between Highway 74 and the entrance to the equestrian center on the bluff overlooking the George Morris arena and the current derby field.

The village will eventually include pools, balconies to overlook the competition fields, an amphitheater, fitness rooms, a laundry facility and other conveniences. McMahon said while they will have the hotel and condos ready for WEG, the other amenities will not be completed by next fall. 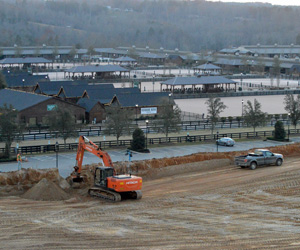 A hotel overlooking the main entrance and several of the competition rings, is just one of the many projects the Tryon International Equestrian Center has in the works for the World Equestrian Games. (photo by Catherine Hunter)

Construction crews started clearing the site for the new VIP and media pavilion in November. The building will be 100 feet by 300 feet and three stories high. This pavilion replaces the large tent that was located between the Derby field and the George Morris arena.

Past the barns and the offices, TIEC has started enlarging their current covered arena. The current 200 feet by 400 feet covered ring will be increased to 200 feet by 950 feet in order to include spectator seating. “This will be the last winter [2017-2018] we will not have shows year round,” MacMahon said. She added that the new covered arena will have a concrete floor similar to a convention center. “That will make it easy to change out the footing,” she said.

While most of TIEC’s arenas and rings currently have a blend of sand and fiber footing which is best for English riding such as dressage and jumping, the new covered ring will allow for a quick, easy change to footing more suitable to Western events such as reining. For a reining competition, Fédération Équestre Internationale (FEI) regulations require that the footing be a “hard packed clay base with 6 to 10 centimeters of loose and fluffy clean sand on top.”

Other construction projects going on at TIEC include moving the horse trailer and RV parking to the north side of Hwy. 74 and creating an easy access between the two and the equestrian center. They are also working to increase the current 2,500 parking spaces to 10,000 for WEG.

As far as the three-story tent goes, McMahon said a sheik is bringing that for himself and his entourage to watch his horses in the endurance competition. She speculated that it would be set up on the bluff near the new hotel.