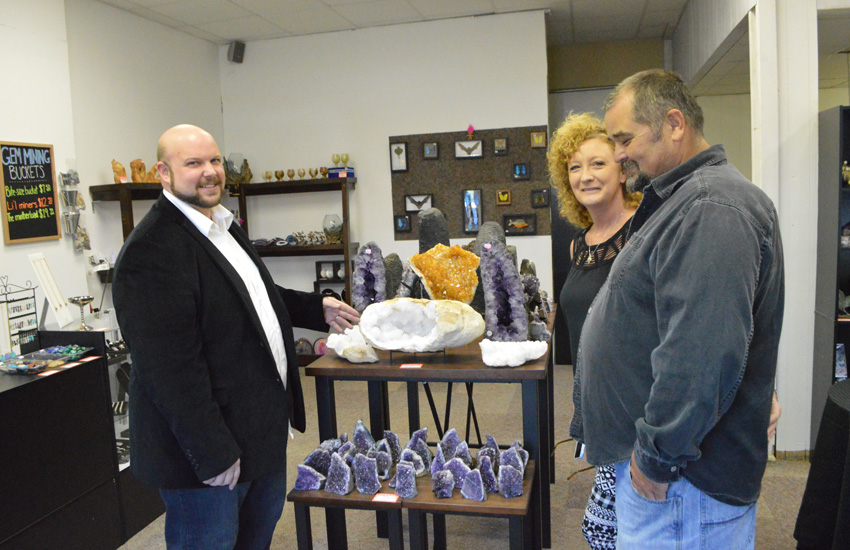 LANDRUM – Landrum’s newest addition brings pieces of the world to the area. Nathaniel Jolly, owner of NJ Traders Rock Warehouse, said kids and adults can come in and see and touch pieces of rock from all over the world.

“They can visit the world through what they see here,” said Jolly.

The shop opened in Landrum on Friday, December 1 between the Pet Gallery and Carruth Furniture Company across the railroad tracks. The store fairly glistens with gems of all kinds including huge amethyst cathedrals to small bits of Tanzanite that can only be found at the foot of Mount Kilimanjaro in Africa.

Jolly, who has a PHD in theology, has had an online gemstone and rock store for about five years. He lives in Hendersonville, but his wife, Jen Jolly, in the niece of Landrum business owner, Glen and Martha Covington of Covington and Company Jewelers. Jolly said when they started to think about opening a store, Landrum was the obvious choice.

“We’ve been waiting for it [the shop] to open so we can bring the grandkids by,” said Landrum resident Judy Lance who stopped by the shop on Friday with her husband Randy. Lance, who does a little mining in local creeks, said he enjoyed stopping at the shop to see what they had and talk mining with the owner.

“We wanted to provide an activity for the kids in the area,” he said. “Kids and even adults like to play in the dirt.”

Jolly is referring to the gem mining set up in the back of the store. About waist high is a wooden trough the length of the wall. Customers can get a small, medium or large bucket of the dirt through which they can search for bits of special stones.

If rummaging through the dirt is not for you, the store is filled with shelves of beautifully polished stones including large and small geodes, sandstone sculptures from Arizona, fossils, gemstone rings and pendants, agate wind chimes, tumbled stones and hand carved jade statues. Other items include woodcarvings, Himalayan salt lamps, bone handle Damascus steel knives, bookends and even mounted and preserved butterflies from around the world. Jolly said one of the most popular items, which turned out to be a surprise to him, are the coonskin hats.

NJ Traders Rock Warehouse plans to host a grand opening celebration on December 16. Everyone is invited to come by and enjoy some music and pizza while it lasts. The shop is open Tuesday through Saturday from 10 a.m. to 6 p.m. For more information call 864-457-1555.