Two Sisters Cook: This is not your grandmother’s fruitcake 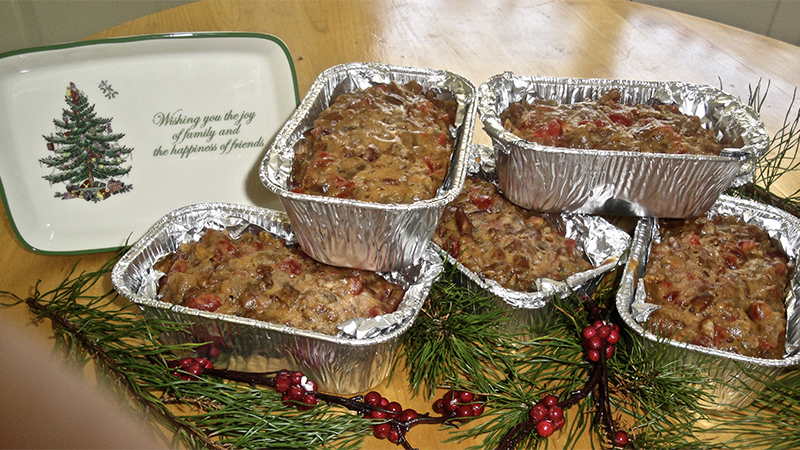 I know that fruitcakes have a bad reputation. But, trust me. This recipe for Mrs. Harvey’s White Fruitcake really is delicious. Lucille Plowden Harvey was from South Carolina. She moved to Florida as a young bride in the 1920s.  When the Tampa Tribune sponsored a fruitcake contest in 1951, she took second place. Her recipe became a beloved favorite, and the Tribune has been publishing it the weekend after Thanksgiving for 60 plus years.

Linda: I’ve never attempted to make fruitcake. But there are fruitcakes that I like, especially if they have a lot of nuts.

Linda: I used to order a Claxton fruitcake from Claxton, Georgia. I was checking their website and they’ve been making them since 1910. According to the history they provide, “Roman travelers had an early version of fruitcake that was closer to a rustic energy bar, with its easily portable mash of pomegranate seeds, pine nuts and barley mash formed into a donut-shaped dessert. As for our version of fruitcake, that dates back to the Middle Ages when preserved fruit, honey, and spices were added to that Roman mixture and it quickly gained popularity.”

Lucy: I saved this account from the Tampa Tribune. It says that they talked to Mrs. Harvey’s son John, who related the family story. He told them that Mrs. Harvey visited upper crust English relatives at Lord Plowden’s estate, Plowden Hall in England, and returned home with the now-celebrated fruitcake recipe. But he doesn’t really know if that’s a true story. The paper also says that according to a 1984 cookbook, “Cooking In The New South,” Mrs. Harvey’s White Fruitcake recipe has been published in 13 countries. A couple of times, the Tribune printed errors in the recipe. Irate readers filled the newspaper’s phones with verbal abuse!

Linda: Well, lets get started. I see that you’ve chopped the nuts and cherries and pineapple.

Lucy: Yes, you need a sharp knife and it’s quite sticky to chop the fruit. You want to buy good quality ingredients, fruit light in color and crunchy fresh. You get what you pay for. The fruit and nuts can be expensive, but it’s worth it.

Linda: And you’re ready with a bottle of apricot brandy?

Lucy: That’s what I baste the cake with when it’s done. You could use rum, which is typical in the Caribbean, or Grande Marnier might be good.

Linda: I think of a fruitcake being made in an angel food cake pan, but you have prepared small loaf pans.

Lucy: Yes, an angel food pan is actually called a tube pan. It makes a large cake. But I like to use these small pans because I want to give them as gifts. They measure 6” x 3” x 2”. I line them with foil so I can easily remove them from the pan.

Linda: I’m reading some tips that say the butter should be room temperature, the eggs properly large, and the fruitcake should be baked slowly in the center of the oven.

Chop nuts and fruit into medium size pieces; dredge with ¼ cup of flour. Cream butter and sugar together, until light and fluffy. Beat in eggs. Sift together remaining flour and baking powder; fold into butter/egg mixture. Stir in vanilla and lemon extracts. Blend in fruit and nuts.

Bake as follows (see note above):

Check cakes 1 hour before done, and again in 30 minutes. Test with toothpick or cake tester. When done, remove from oven and cool on cake rack.

Leave cakes on the counter. Baste with apricot brandy everyday for about 10 days or 2 weeks, covering with clear wrap after each basting. After the basting time, keep covered with the plastic wrap or foil and store in the refrigerator for easier cutting.