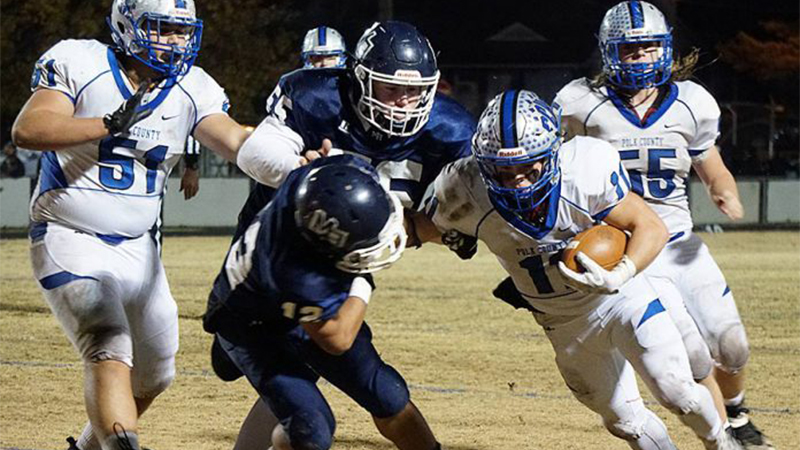 In the hometown of Andy Griffith that served as the model for the fictional setting of his beloved television show, the Wolverines received a rather rude introduction as well as exit from the state playoffs, falling 42-20 to undefeated Mount Airy in a second-round playoff matchup.

The Granite Bears (12-0), top seed in the 1AA West bracket, scored on their first six possessions, building a 42-0 lead by the midpoint of the third quarter. Mount Airy ran 25 offensive plays on four drives in the first half, gaining 280 yards and reaching the end zone on each for a 28-0 lead at the break. 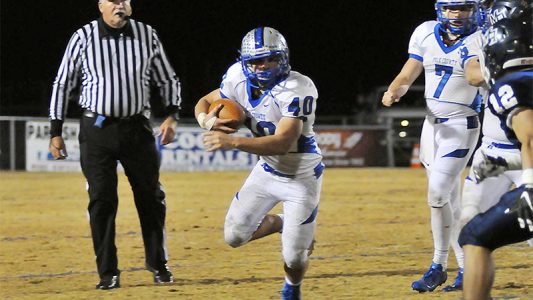 “We lost to a good football team tonight,” said Polk County head coach Bruce Ollis. “That may be a team that vies for a state title. We just couldn’t make a break for ourselves.”

To their credit, the Wolverines (8-5) did not go quietly into the chilly night. Polk County scored three times in the final quarter and a half, with Dillon Overholt catching a pair of touchdown passes and Dillon Knighton snaring a 12-yard scoring pass as time expired. All three of those scores came from seniors, two of 11 who played their final game in Polk County colors.

“I can’t say enough about the way we battled in adverse conditions,” Ollis said. “I’m proud of this football team. I’m a better man for having known these seniors. They battled all the way until the end.”

Two moments in the first half helped define the final outcome. 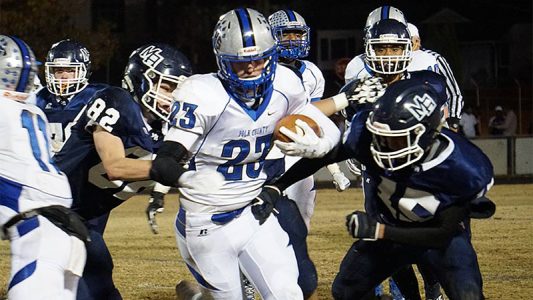 Polk County kept the ball for more than five minutes on its opening drive before failing to convert a 4th-and-4 at the Bears 40. Mount Airy drove 57 yards in five plays to score on its first possession, with Donovan Greene turning a slant route into a 32-yard touchdown reception with 5:42 left in the quarter.

Mount Airy then perfectly executed an onside kick, the ball taking a huge hop into the arms of Ian Holder at the Polk 42. Sophomore Jonathon Smith rolled around right end for 33 yards on the Bears’ first play and Holder swept around left end for the remaining nine, giving the Bears a 14-0 advantage with 5:06 still to go in the first quarter.

“The onside kick really hurt,” Ollis said. “They made a great play on that.”

Polk again drove into Mount Airy’s end of the field before punting on its next drive, and the Bears covered 88 yards in five plays to score once more, this time on Jeremiah Rosser’s 48-yard sweep. The Wolverines responded with a long drive deep into Bears’ territory, but a fumble ended that threat and gave Mount Airy the ball at its 7.

The Bears then fashioned a torturous 13-play, 93-yard march that lasted more than seven minutes, finally ending with 45 seconds left in the half on Holder’s 4-yard swing pass to Smith. Mount Airy converted three third downs on the drive, not counting the touchdown that also occurred on third down, in a deflating series for Polk just before intermission.

“We never made any breaks for ourselves,” Ollis said. “We got the ball inside the 10 the one time and fumbled. We could easily have been down by 14 at the half with some breaks here and there.”

After having little to cheer for on the Bears’ huge video scoreboard other than a photo of PCHS principal Dr. Brandon Schweitzer and assistant principal Josh Hill with a statue of Grffith, the Polk County faithful who made the three-hour trek to Mount Airy came to life in the final quarter and a half. The Wolverines drove 68 yards in nine plays, capped by Overholt’s shoestring catch of an 18-yard pass from Edwards, making it 42-7 with 2:26 left in the third period.

Fighting a running clock, the Wolverines scored again with 3:15 left in the fourth period as Overholt snared a 24-yard pass from Edwards. Polk County then forced a a Mount Airy fumble near midfield and raced to get one final score, Knighton making the catch near the goal line and tumbling into the end zone as time expired.

Smith rushed for 107 yards on 11 carries and Holder threw for three touchdowns and 129 yards on 8-of-10 attempts to lead Mount Airy.

“Even with the running clock at the end, we found a way to score three touchdowns. I’m awfully proud of that,” Ollis said. “This has been a good season, lot to be proud of, and now we’ll start thinking about next season.”