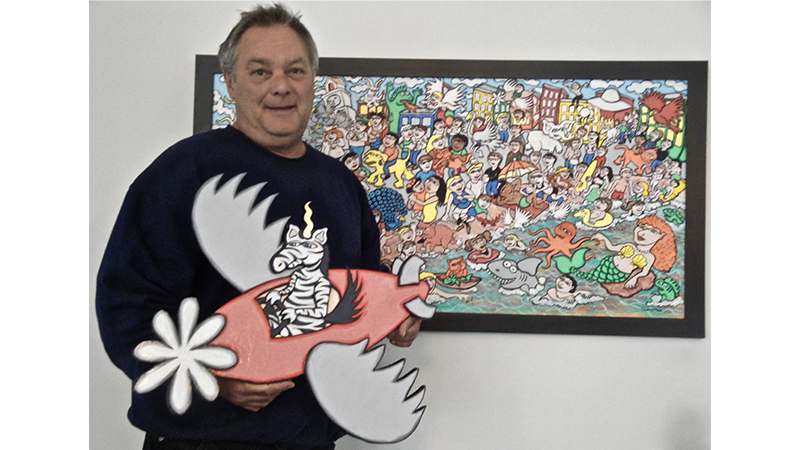 Recently I had a chance to peek in Landrum’s new art venue, Whimsical World. Today it’s a crisp, sunny fall day and I’m headed back to the gallery to talk with David Cedrone. I want to discover who the artist is behind these enchanting creations.

David has recently relocated to Landrum from Portland, Maine. He purchased an empty church and meeting room at the top of Jones Street, converting the meeting room into living and work space. The church, filled with colorful, whimsical art work, serves as his gallery.  “I like the weather here better,” he smiles as he greets me, with the sun streaming in the windows.

David grew up in the Boston area, spent time in college at Rhode Island School of Design before settling in Portland to develop his talent. “I was determined to create enough work to have a show and get my career started. I worked various jobs and taught after school programs until I was able support myself with my work,” he explains.

His work is filled with imagination, reminding me of a child’s dreams. I ask how young he was when he showed an interest in drawing. “I was a shy kid. I loved to draw. Even as a very young child I would take my coloring books and trace the pictures. It actually taught me how to draw things, how lines worked to create things like animals and figures. Then I got into cartoons. For Christmas and birthdays, I always wanted art supplies and paper. I was the art teacher’s pet,” he laughs.

In high school he was able to actually leave class and attend studio courses at Montserrat College of Art. He studied drawing, design, and sculpture, both beginner and intermediate levels. David was impassioned and determined to make art his life’s work.

I suggest that his work, although his own style, has the feel of some of Peter Max’s work, remembering the Beatles and “Yellow Submarine.” “Yes, I love his work. I’ve always believed that work from my imagination is better than realistic renderings. I’m influenced by writers like Maurice Sendak, Dr. Seuss, and Shel Silverstein’s book “The Giving Tree.” I describe my paintings as ‘story starters’. The idea, the imagery, comes quickly to me, but I don’t really have the rest of the story,” he grins.

David shows me pictures of some commissioned work that he’s done. “See this,” he points out. “This lady had a Dalmatian. She was engaged and she thought her fiancé was really in love with her dog. She wanted a piece to be like a diary of their life and the dog. So I did all these scenes. Then sadly, the dog died,” he remembers. “But the happy ending is that she got two new Dalmatian puppies.”

After many years in Portland, David decided it was time to relocate. His parents, who  live in Charlotte, are getting older. He felt he needed to be closer to them. He has three brothers and a sister plus eight nieces.

He continues, “I tried Asheville out for awhile but it just wasn’t my place.  It seemed too congested and a fast paced lifestyle. I’ve only been in Landrum for a few weeks, but I’m really enjoying it. I feel like I can breathe. I’m getting to know people. Hague Williams is the new art teacher at Landrum High School. He and his wife arrived here about the same time I did. We’ve already discussed some projects to explore together. And I went to the recent opening at Upstairs Art Gallery in Tryon. It’s a wonderful gallery.”

I comment on a stained glass alligator piece hanging in a window. “Yes, I’ve been exploring some work in stained glass. Most of my work has been three dimensional wood carving using acrylic paint for backgrounds.” He shows me some work in progress with a background he calls ‘city scapes’. It resembles buildings and shops. Then he uses his imagination to develop the piece. “I see this and I think it should have people eating pizza,” he envisions. And with that suggestion, I can visualize it with people eating pizza!

A lot of the pieces feature animals, or maybe I should describe them as dream animals. “I start with one character and then they become more. And I am an animal lover. Right now I have a Jack Russell terrier, a Bichon Frise, and an African gray parrot. The gray parrot talks but only repeats what he’s just heard, like ‘Yup, OK, or bye-bye. And I have a fish. The parrot could live until he’s 80 so I will have to have him in my will.” Then he tells me, “One time I lived above a store. I had seven birds and a Vietnamese pot bellied pig that weighed 230 pounds. But he and my dog didn’t get along and I had to give the pig away. I found a home for him on a vegan farm where they work with troubled kids who help on the farm.” I am overwhelmed at the idea of seven birds, a dog, and a 230 pound pig.

Along with the larger pieces of artwork, David offers blank cards featuring his charming characters along with some beguiling carved magnets. I’m thinking Christmas gifts!

Whimsical Gallery is located at 116 Jones Street. It’s the street off 176, a block past God’s Creatures Animal Hospital. Stop by and introduce yourself to David. You’ll enjoy entering the world of his fantastical characters.

Farm life: the way it used to be