Saddle up with new technology 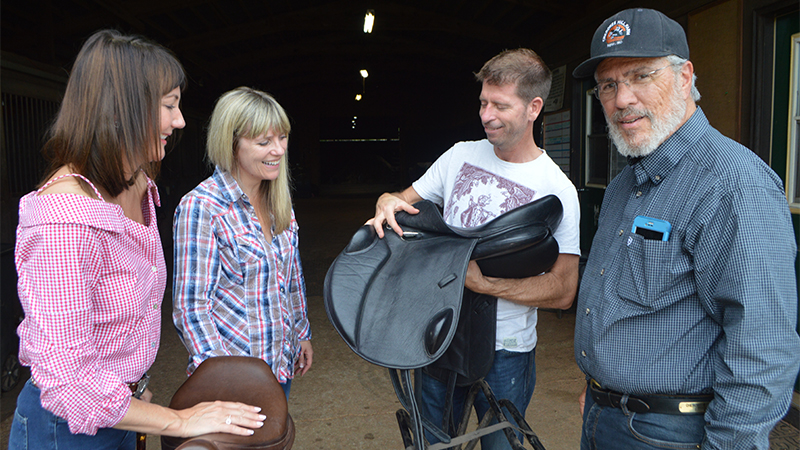 Tryon is leading the way in developing new saddle technology. Cherokee Hill Farm owner and trainer, Mike Schatzberg is working with Ron Friedson of West Port, Conn. to develop an adjustable saddle that will fit almost any horse.

“With this technology a rider can easily change horses,” said Schatzberg. “They don’t have to carry multiple saddles with them.”

Until now if rider wanted to switch from one horse to another, they either had to have several different saddles to ride in, ride in a saddle that did not fit them or spend a lot of time changing out a static gullet system. Now, with Pegasus Saddles’ adjustable trees, a rider can find one saddle that fits him or her and not be concerned about hurting a horse’s back.

Schatzberg has been in the Tryon area for 31 years and rode with the Green Creek and Greenville County Hounds and served as Field Master for Green Creek. He has represented Kiefer saddles for years and is trained in their method of saddle fitting.

According to Schatzberg to fit a saddle, Kiefer would take a digitized measurement of the horse’s back and form a mold to perfectly fit the horse. While this method was some help in fitting horses, problems would show up when the horse’s muscle structure changed. This often happens as the horse is worked, or if the farrier changes the angle of the horse’s hooves.

“When you start training a horse he has no back,” said Schatzberg, explaining that a horse’s back muscles develop and change as he is ridden. “How many people take time to get a [saddle] fit that doesn’t fit [the horse] in six months?”

When asked about the problems that can arise from using an ill-fitting saddle, Advanced Equine Structural Integrator Kelly Snyder with Equine Freedom Solutions said, “An improperly fitted saddle not only creates pain which can lead to behavior issues, but also leads to performance and even soundness issues. I have one of these [Pegasus] saddles and my horses love it.”

Another issue is the expense of the saddle. Kiefer saddles are made in Germany and can cost anywhere from several hundred to several thousand dollars. If the rider had more than one horse, they would have to purchase different custom made saddles to fit different horses.

While Kieffer and other manufacturers offered custom fitted saddles, saddle makers such as Wintec developed a changeable gullet system for their synthetic saddles. With this system the saddles had metal gullets in different widths that could be changed. While the changeable gullets made it possible to ride more horses with the same saddle, the changing of gullets involved unscrewing bolts, pulling the gullet out from between the layers of the pommel and screwing in the new gullet.

Schatzberg explained that Pegasus saddles are made with flexible hinges designed by Boeing Aircraft engineers. The hinges, located in the saddle’s tree, will open wider for a broad backed horse and close narrowly for a narrow horse. The saddle fits snuggly to the individual horse as the girth is tightened.

Currently Pegasus offers a foxhunting saddle that is comfortable and substantial enough to support a rider for several hours, all-purpose saddles, a dressage saddle, an eventing saddle and jumping saddles. The saddles are offered in several types of leather including, not only common cowhide, but also calfskin, buffalo calf leather and combinations.

“Ron [Freidson] thinks out of the box,” Schatzberg said. “I wouldn’t be surprised to see kangaroo.”

The saddles not only have the hinged tree for custom adjustment, the saddles are designed to fit either a short or long-backed horse. Schatzberg said with the adjustable stirrup bars, slightly forward knee flaps and the movable hinges, the saddles can sit more forward on the horse’s shoulders without interfering with shoulder movement.

Schatzberg and Freidson are also working to develop a version of the Pegasus lightweight eventing saddle that is especially designed for endurance riders. With this in mind, Schatzberg hosted two endurance teams, one from Israel and one from England who will be competing in the World Equestrian Games (WEG) next year.

“We came here [Tryon] to see the terrain and get a feel for the weather,” said Caroline Crawley who lives near Newbury, Berkshire. Crawley is a member of Team GB (Great Britain) Endurance team that will be competing in WEG.

Claire Dovey, also of Newbury and a member of Team GB, tried the Pegasus eventing saddle. “I really didn’t notice the saddle,” said Dovey who explained that she is recovering from a serious leg injury and has difficulty riding. “That’s says a lot [about the saddle]. It has more support for my legs. I’ve been through a lot of saddles,” she said. “I need the saddle to really hug me in.”

The Pegasus saddles are made in Germany by a saddle maker who used to design saddles for Kieffer. The are then put together and finished in Connecticut.

The cost for a saddle runs from $3,500 to $4,000. Schatzberg has several demo saddles that he allows prospective shoppers to try out at his farm before they purchase. For more information on Pegasus Saddles contact Schatzberg at Cherokee Hill Farm, 828-859-9990, on Facebook at
Cherokee Hill Farm or visit
pegasusbutterflysaddles.com. •