From water baby to senior athlete 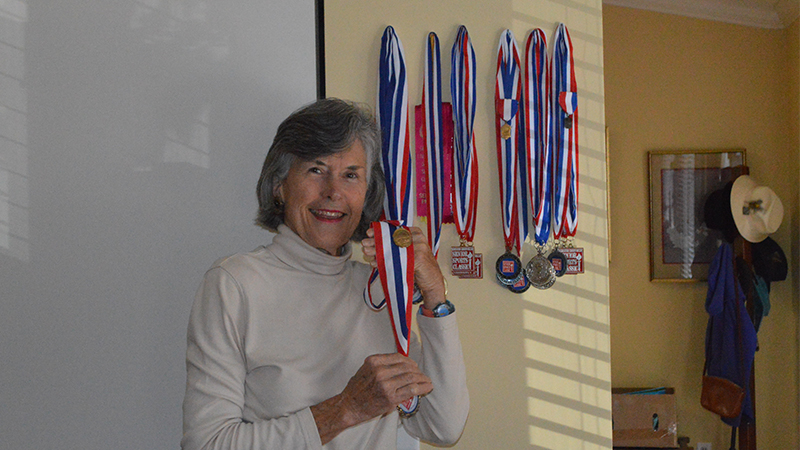 TRYON – She won her first medal at age three while swimming in the Long Island Sound and she’s still winning medals, now in the Senior Olympics. Tryon resident Suzanne Engelmann believes swimming is great exercise for young and old alike.

Engelmann began swimming in the Senior Olympics in 2005. Her favorite competitions are the backstroke and the freestyle (also called the crawl). She swims the 50, 100 and 200-meter races and has won eight gold and six silver medals in regional competitions. Engelmann said she is considering going to the national Senior Olympic competition next year.

Not only does Engelmann compete because she loves swimming, she does it to try and inspire others. “A lot of seniors are sedentary and don’t get proper exercise,” said Engelmann who added that she believes, “Swimming is the best form of exercise you can get.”

Speaking from a former career in preventative medicine, Engelmann said  swimming is good therapy for arthritis or to delay the progression of arthritis. “When you move your body you increase the Synovial fluid that lubricates the joints,” she said. “Swimming does that with less stress and shock to the joints [such as in jogging]. It’s a low impact exercise.”

Though she was an avid swimmer throughout school, Engelmann didn’t compete much until the Senior Olympics. “There was no swim team or competitive sports for women in high school,” she said.

She did swim every day at summer camp and became a Red Cross certified advanced swimmer and water safety instructor (WSI). She has also served as a volunteer instructor for children’s swim classes and adult aqua exercise rehabilitation programs.

Today, Engelmann swims at the Tryon Swim Club and encourages seniors and those of all ages to consider either learning to swim or trying aqua exercise. “There are programs that put babies in the water,” she said. “Of course that won’t guarantee they won’t drown, but it gets them familiar with water. If child is exposed to water as a baby, they are usually less fearful when they start swimming lessons.”

Engelmann travels a great deal and said countries such as Iceland have mandatory swimming for all children. “Every little community has public pools heated with geothermal energy,” she said. “I was impressed that every child learned there to swim.”

While she does encourage everyone to swim, Engelmann said she has learned caution and wants to caution those swimming in water or oceans with which they area unfamiliar. She said riptides and under currents are a very real danger on beaches and that many countries do not put out warning flags like they do in the U.S.

“I was wading in the ocean in Bali, just calf deep,” she said. “A waist high wave caught me and dragged me 20 feet, and I’m a strong swimmer.”

Engelmann also expressed concern about people swimming in local ponds or rivers. She said she has heard of people diving into pools and hitting hidden rocks or being swept away by waterfalls or by the currents in local rivers or streams.

However, with all the notes of caution, Engelmann still says, in her opinion, swimming is the best exercise. “It’s not too late to start swimming. Even if you’re a senior, learning new stuff is cool,” she said. “Swimming or aqua therapy is an activity that virtually anyone with the will can do and that makes them a winner.”