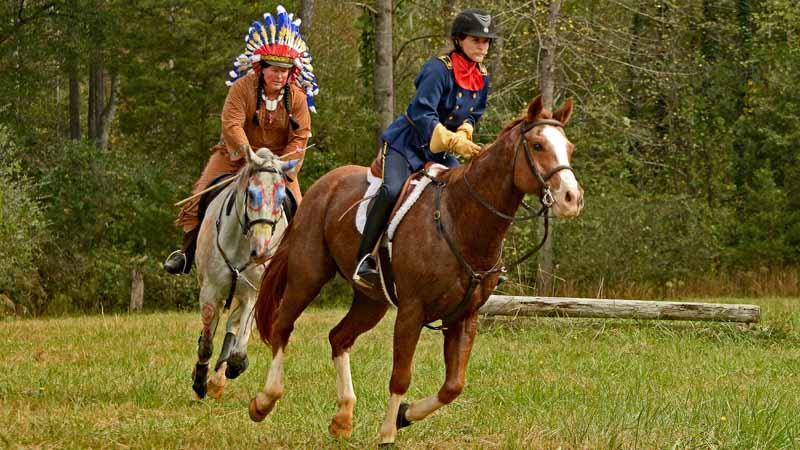 What a spectacular Sunday for the Green Creek Hounds Hunter Pace and Trail Ride! The morning started off just a little cool but warmed up very nicely. The sun was shining and mystery filled the air with the Halloweeners popping up everywhere. There were witches, astronauts, indians, heavy metal singers, and many more! Robin Hood even made an appearance. The Green Creek Hounds always have a wonderful Halloween Hunter Pace and Trail Ride and this year they didn’t disappoint.

Many thanks to the private landowners. They are very gracious to allow passage onto their property on Oct. 22, and what beautiful property it is! 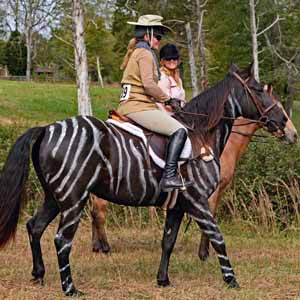 Marion Connor was the Chairman for this event.

The signage for this Hunter Pace was top notch. White signs with green lettering were seen from all points leading to the property. Thanks go to Janet Cummings for setting the signs. Drivers were met at the gate to the property and parked by the illustrious team of Christiaan Barendon, Ken Feagin, Chris Hendrix, and Ian McDonald. The parking area was packed from early on. One could tell that the attendance was high just looking at the rigs in the field.

Riders were greeted at the registration table by Robin Julian, Holly Mitchell, Ginny Sullivan, and Lenore Threlkeld. These ladies make sure that all paperwork and releases are signed. They checked the Coggins, and gave riders their numbers. Kathy Nebel was right next to registration showing off the Green Creek Hounds merchandise. There were some very nice koozies available in addition to the shirts and other merchandise. 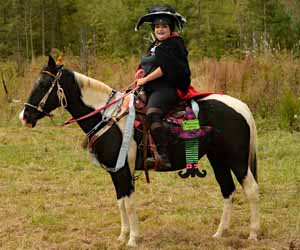 Jennifer Willson was a well-decorated witch (Photo by Lou Smith)

The Starter for the day was the beloved Joey Cabaniss. Folks, the timer job isn’t as easy as it looks. There is more going on at that tent than people realize. He has to be very aware of who’s coming and going. Carol Parker was there to assist. She was in charge of pointing out the color ribbons to follow. This time out it was white with green polka dots, not the orange! Joey makes sure that riders know where to start and finish and then sends riders out with his usual humor.

Riders were met at the check point by Skip Leck, Betsy McCray, and Ann and Jim Troppman. Here the horses rest for the mandatory three minutes. Riders were offered a cool beverage or a nice Port. Riders can dismount and stretch their legs at the Check Point if they so desire. After the mandatory time of rest has been met, riders are on their way again. 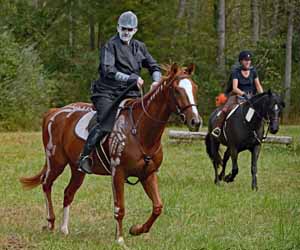 Let’s get to that food! Grill Master Jim Sumrell was hard at work over the grill. The hotdogs were perfect. There were a few veggie burgers as well. The chili and beans were outstanding. Ann Fratcher outdid herself with the food! Not only did she make the chili, she made the pasta salad, cole slaw, and potato salad. Well done, Ann, well done! There were plenty of soft drinks and water available as well. Carrots were on hand for the four-legged palates. 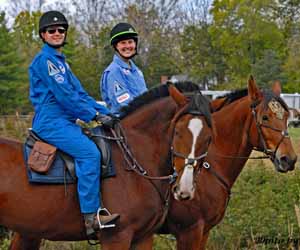 Joan MacIntyre was the costume judge this year. She definitely had her job cut out for her. After much deliberation, the winners were:

First Place winners were DJ Jeffries and Catherine Mooneyham as Chief Sitting Bull and General Custer, while Second Place Honors went to Harold Pfeiffer who was dressed as a Game of Thrones character, The Night King.

The attendance was extraordinary! There was a grand total of 130 riders in 62 teams. The trail was 8.5 miles long. 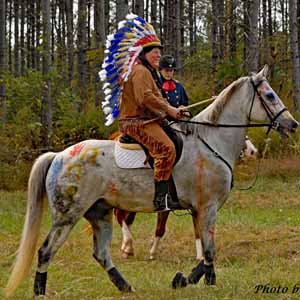 There was a total of 56 riders in 26 teams in the Field Hunter Division. The Optimum Time set by Christie Fowler and Erin O’Dwyer was one hour, 19 minutes, 54 seconds.

In the Trail Rider Division there were 74 riders in 36 teams. The Calculated Optimum Time was two hours, ten minutes, 41 seconds.

Fourth Place Honors were awarded to Sharon Capps from Rutherfordton and Sandra Hyder from Landrum with a time of two hours, 12 minutes, 19 seconds. Fifth Place was awarded to another duo, Suess Fraser from Tryon and Gena Meredith from Landrum with the time of two hours, 12 minutes, 52 seconds. Rounding out the placements in the Trail Rider Division for Sixth Place was the quartet from Asheville, Susannah Birch, Grace Karegeannes, Lacy Westle, and Diane Wilson. Their time was two hours, 13 minutes, 55 seconds.

To save some time and crowds at the registration tables, download the registration forms from the Western Carolina Hunter Pace website for the specific event and slap a return address label on it including your emergency contact and email to ensure you can be contacted.

Check www.wchpace.org for upcoming events, changes, and to view your photos taken by Photographers Lou Smith and Jan Smith. With the weather being so unpredictable here of late, rain dates are in place in case of a postponement.

After four of the possible 17 scheduled events of the 2017-18 Western Carolina Hunter Pace & Trail Ride Series, there are ties all down the line, leaving the current standings as follows:

Marcia Headrick and Rich Neel are holding their lead with 23 Series points at this time.

Amy Christensen has moved into Second with 19 Series points.

Amanda Aiello, Debbie Croft and Nicola Deines have 18 points each for a tie in Third Place.

Shannon Jackson has moved up into Fourth with 15 points to date.

Susan Haslam and Rebecca Tolson have each earned 13 points for Fifth Place.

Kristen Brown, Beth Goldizen, and Jennifer R Smith are in Seventh with 11 points at this time.

Christina Goen and Emily Mitchell are fittingly in Ninth Place with nine points each.

Holly Bacola, Mary Livesay and J Rutlege have each earned eight points to put them into Tenth Place at this writing.

Karen Brockway and Nancy Mason have six points at this time.

Anna Dalton and Ann Fratcher have three points each.

Catherine Gillet has earned one Series point to date.

Darleen Bullock, Nikki Hynes and DeAnna Norton have extended their lead with 21 Series points at this writing.

Ronnie Mann is in Second Place with a current count of 13 points.

Jennifer Smith is in Third Place with 12 Series points.

Bobby Turner and Diane Wilson are currently tied in Fourth with 11 Series Points each.

One point apiece has been earned to date by Julie Alexander, Janet Cummings,Bob and Terri Davenport, John Hicks, Ann and Tony Hubbuch, Beth and Craig Looper, and C.R. and Carol Stanley.

Events will pick back up on Jan. 6 with the S.C. Upstate Equine Council at Clemson and continue straight through May, so be sure to check the schedule and come play with us!

Thank you to our photographer, Lou Smith, for being at every event to capture the riders and their mounts as they fly over jumps, canter through the fields and enjoy the beautiful area trails.

For information on the Western Carolina Hunter Pace & Trail Ride Series e-mail Series Coordinator Jan Smith at WCHPace@Windstream.net or Jan@WCHPace.org, or call her at 828-894-8760.