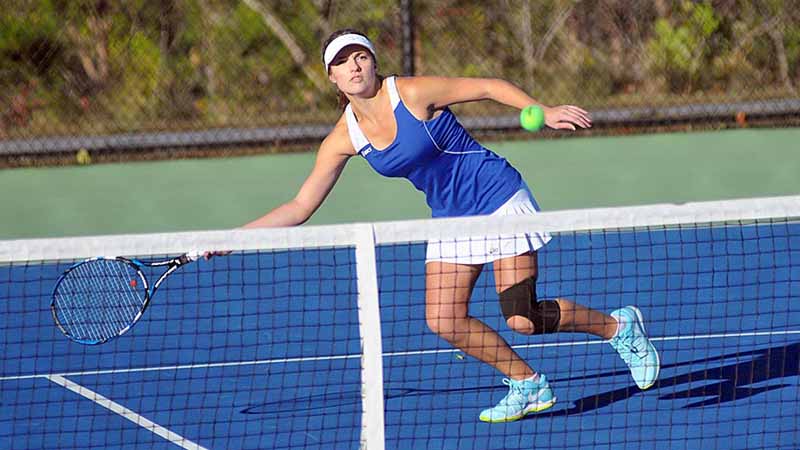 The Wolverines so very nearly earned another act.

East Surry ultimately pulled out a 5-3 win in a 1A state quarterfinals match, advancing to a semifinal clash with either Bishop McGuinness or Mount Airy. But flip a key point or there in a couple of matches and it might well have been the Wolverines continuing their dream season for another day.

All of which made focusing on the many highlights of a 15-3 season tough for Polk County to do at day’s end.

“When you get this far and you’re this close to advancing to another round,” said Polk County head coach Richard Davis, letting the sentence die amid thoughts of what if.

“I’m proud of all of them. Who would have thought in August that we would be standing here on October 30 fighting to go to the fourth round of the state playoffs?”

The teams split the six singles matches, East Surry’s Haley Gilley ending that round with a 6-2, 3-6, 10-7 win over Polk County senior Bella Marino. Marino staged a gutsy comeback after losing the first set; Gilley did the same in rallying from a 6-3 deficit in the tiebreaker, reeling off five straight points to take command and eventually win.

Thus remained three doubles matches to decide the winner. With the Wolverines’ No. 1 doubles team of Hannah Jenne and Tana Harris jumping out to a big lead (though that match was halted once the team result was determined) and East Surry’s No. 2 team of Abigail Martin and Gilley doing the same, the No. 3 doubles match quickly garnered attention of the fans from both schools in attendance.

But Payne and Craven broke serve again and held their own for a 7-6 lead, then pushed the lead to 8-7. The Wolverines led 30-15 in the 16th game of the set, but Payne and Craven reeled off three straight points for the game, then served out the set at love.

Griffin and Rostick each won their singles matches and will be a key part of Polk County’s returning class next season. The Wolverines lose singles starters Marino and Haven Dufford as well as frequent doubles players Trinity Branham and Willow Arkell, but will return Jenne and Harris, 1A state doubles champions, as well as a handful of other players.

One thing was certain late Monday – no one wearing Polk County colors had reason to hang their heads.

“They were a good team. There’s a reason they were in the third round. They didn’t luck their way in here,” Davis said of East Surry. “Neither did we.

“All we can do is just go home and think about everything and soak it all in and say wow, it’s over. We had a great season.”