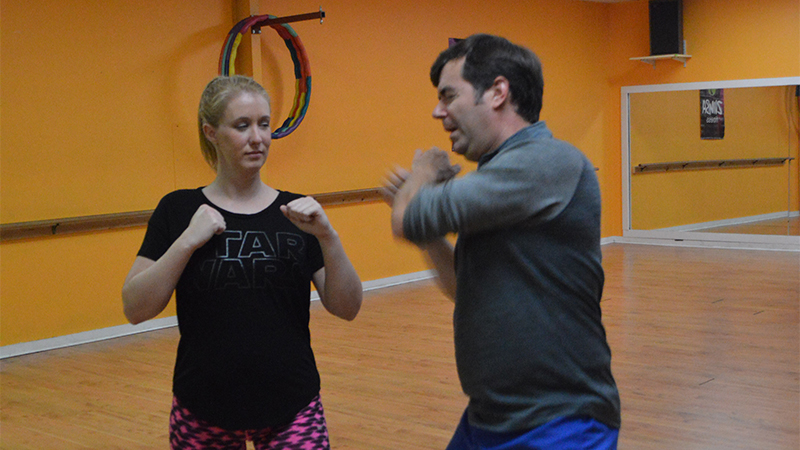 TRYON – “I take the Bruce Lee approach to belts,” said martial arts instructor Jim Fulton. “Belts are good to hold up your pants.”

Fulton is offering martial arts classes for women ages 18 and up and classes for boys and girls ages 10 through 17 at the Tryon Health and Fitness Center. While Fulton doesn’t require formal karate uniforms and belts that show rank, his quiet, focused style of teaching does reflect the respect and self-confidence found in those who study traditional martial arts.

Fulton explained that he teaches a full spectrum of martial arts geared toward self-defense. During the sample class he offered Wednesday, Oct. 25, Fulton had new students practicing punches, kicks, stances and grappling.

“Grappling arts are great for women to learn,” said Fulton who has 17 years of training in forms such as Shotokan Karate, Taekwondo, Kung Fu, Brazilian Jiu Jitsu, Mixed Martial Arts and weapons.

Molly Turman, who has trained in Shotokan for several years, tried the sample class. “I enjoyed it,” she said. “He showed us some different techniques.”

Magan Etheridge also tried the sample class, bringing with her the martial arts training she received in the Army. “It was a lot of fun,” she said. “There were a lot of good tips. I think it’s good for any woman, or any man for that matter, to learn self-defense.”

Some of the tips Fulton passed on to the students include punching in the center of the target so the opponent’s entire body absorbs the full impact. He also spoke about the vagus nerve and other areas on the head and face in which a blow can render an opponent unconscious.

“It’s important not only to learn to strike very hard, but also where to strike on the body,” he said. “You also want to punch or kick deep inside the body, not just on the surface.”

Fulton also stressed practice. He said martial artists never reach a point where they don’t need to practice. “You can’t take a two hour class and learn to defend yourself without practicing,” he said.

According to Fulton, much of what he teaches can be applied to self-defense because it’s a mixture of techniques. “Real fights always include striking, kicking, knees, elbows, head butts, biting and grappling on the ground,” he said.

He also explained that martial artists who have learned the code (honor, respect, humility, benevolence, etc.) are not the ones who start fights. “When it comes to a street fight, I don’t believe in an honorable fight. You didn’t start it, so you have to use whatever you have,” he said.

It is that focus that helped Fulton take something from each style he learned and made it his own. He began studying martial arts with Ray Rice in Forest City where Fulton grew up and still lives. “He [Rice] had a very positive impact on my life,” he said.

Fulton studied with Rice for nine years and went on to learn other forms. He said it was more important to know and understand the principals and underlying techniques of a form than to become married to the form for the sake of tradition.

“It’s like Bruce Lee said, if you only learn one way of doing things, you can become robotic. You can’t be robotic in combat.”

Tryon Fitness is currently signing up students for the youth and the Women Warriors classes. Students do not have to be a member of the fitness club to take the class. For more information contact Tryon Health and Fitness Club on Academy St. at 828-859-5935.