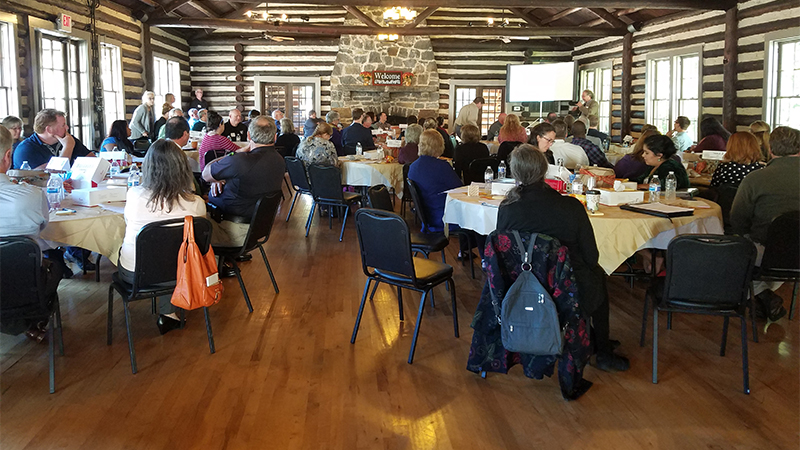 Polk County held an Opioid and Substance Misuse forum on Wednesday, Oct. 24 to discuss ways to tackle the issue in Polk County. The forum was held at Sunnydale in Tryon and included speakers and group discussions about what community members can do to help. (photos by Leah Justice)

TRYON –  The first of likely many forums to tackle Polk County’s substance abuse epidemic was a real eyeopener for 91 invited community members who made a personal commitment to step up and do something.

Dr. Martin said 9.5 percent of people have diabetes and about 9.5 percent of people have substance abuse. Martin said if he goes to the emergency room because his blood sugar is 600, the doctor doesn’t wait and ask what type of insurance he has. Doctors refer to a diabetic as a person, not a diabetic. The difference between the two is if someone goes to the emergency room for substance abuse, they are referred to as an addict, not a person, said Martin.

Martin said substance abuse is a disease and rational thinking goes out the window when people are starving for the drugs they need.

“All they can think about is getting that drug,” said Martin. “One of the things we can do is look at a different model.”

Martin said what really needs to be done is to bring recovery into the community.

Parton spoke on the effects that substance abuse has on families. She said on average every month Polk County’s DSS has over 200 children served through child welfare and each case starts with a child protective services report. The number one reason is substance abuse. Parton said most of the children don’t come into DSS custody because family members step up to take care of the children.

Parton then gave some heart-wrenching examples of cases she has seen because of substance abuse.

Parton said there was once a three-year old who told his preschool teacher how afraid he was and how he and his mother were trying to get away from his abusive father. The father was a local football player who had an injury and started on pain medication, Parton said.

There were three small children under the age of 5 years old, found alone, Parton said. The two older ones decided they wanted to go for a walk and took the smallest with them, and the neighbors called it in. Officials found the parents in the home, one hyped up on pills and the other so drunk they couldn’t function, Parton said.

Parton said there was a 13-year-old who told his teacher he needed help because he was having to drive his parents home from bars.

“He came to that teacher because he knew he was at a crossroads,” Parton said. “That 13-year-old is now an adult and is doing well. The smell of alcohol makes him sick.”

Parton also told of two young girls who were found in a mobile home during August when the temperature was over 100 degrees, there was no air conditioning, and blankets covered the windows so people couldn’t see inside. Parton said the father took painkillers, and there were no knobs on the doors so he could lock the girls inside to control what they were doing. One day, he passed out and the older girl figured out how to open the doors and get food out of a can just so they could eat. Parton said they both have suffered multiple mental health issues.

DSS also takes custody of adults when they need care. Parton said opioid misuse is increasing in adults and alcohol abuse is soaring for older Americans. In July 2017, Parton said DSS was the guardian for 13 adults, which was actually lower than it had been.

Capt. Griffin said from 2008-2010, Florida pain clinics administered nine times the Oxycodone as the other 49 states. Griffin said this area was seeing Oxycodone in gallon jugs. He said the federal government stepped in and cracked down, but a lot of the damage was already done.

Griffin spoke of Polk County’s location, being in between the counties of Henderson, Rutherford, Spartanburg and Greenville.

He said he was working late the night prior conducting a drug seizure in Polk County.

Griffin spoke of drug cartels and said a lot of heroin that ends up here is coming from the Middle East. Griffin said there is a prevalence of guns in the South, as well as a lot of larceny of these guns. The guns are being channeled through Charlotte and traded up north for heroin, according to Griffin.

“From Charlotte it’s being distributed to the southern sea board,” Griffin said. “We are in the cross hairs for a lot of that. These cartels are out there. There are drugs pouring in.”

Griffin also said overdoses are out of control, especially in the regions around us. He spoke of a young female he encountered when he was a patrol officer who is now deceased. She was the first to explain to him why people crush up pills and shoot them into their veins.

“Their addiction level is so high,” Griffin said. “Their tolerance level also grows so they need to get the most bang for the buck.”

Griffin also said Fentanyl is often used as a “cut,” meaning it is mixed in with another drug such as heroin. Drug users inject the same amount of heroin they are accustomed to injecting but the potency is so much higher that they overdose.

An epidemic of unintentional poisoning deaths continues to affect North Carolina, and Polk County is not immune to the epidemic. Since 1999, the number of unintentional overdose deaths has increased by more than 391 percent in the state, from 279 in 1999 to 1,370 in 2015, according to Injury & Violence Prevention Branch of NC Health and Human Services.

The vast majority of unintentional deaths is drug- or medication-related and occurs when people misuse or abuse drugs, in particular, opioid analgesic deaths involving medications such as methadone, oxycodone and hydrocodone. Opioid analgesics are involved in more drug deaths than cocaine and heroin combined but that seems to be changing rapidly, according to the North Carolina Injury & Violence Prevention.

The forum ended with group workshops turning in ideas on the topics of “dream,” “barriers,” “we can” and “I will.”

Pittman closed the forum and thanked everyone for attending and agreeing to commit.

The N.C. Association of County Commissioners (NCACC) asked counties to begin working to tackle the epidemic. Pittman said Polk didn’t have to implement it but they did.

“You all play an important role because this is a community problem,” said Pittman. “Thinking outside the box and working collaboratively as a team is the only way we’re going to solve it.”

Programs are being planned in the school system.

Another forum is being planned for February 2018 when Pittman said the county plans to put some of the ideas from Tuesday into action.