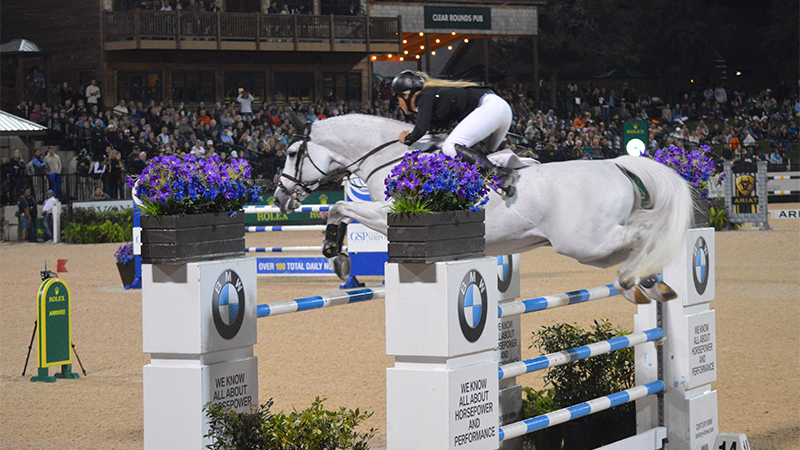 Stadium jumping is just one of the many events in the upcoming World Equestrian Games next fall at the Tryon International Equestrian Center. (photo by Catherine Hunter)

MILL SPRING – Tickets to the world of equestrian sports went on sale at the Tryon International Equestrian Center (TIEC) last week. The World Equestrian Games (WEG) will be September 11-23, 2018.

For those horse enthusiasts and even those who appreciate their beauty from afar, the event should be mesmerizing. Horse experts will be “oohing” and “aaahing” over shoulder-ins, piaffes and extensions. Those not so into the subtleties will have the opportunity to hold their breath as horse and rider negotiate big fences in record times or scatter dirt in a sliding stop.

Tickets will cost anywhere from $82 for the driving competitions to $1,500 for the entire games. Most $120 day passes for all events in a single day are already sold out.  Tickets for all events in a single sport such as dressage, run $105 to $375 depending on the sport. WEG takes place every four years opposite of the Olympics. Equestrian athletes around the world will compete for top honors in jumping, dressage, Para-equestrian dressage, cross-country, driving, reining, vaulting and endurance.

Similar to the Olympic Equestrian games, WEG bases their games on the “three day event” competition that includes dressage, stadium jumping and cross-country. This type of competition was originally designed to test cavalry horses and foxhunters that had to travel distances at speed, over obstacles and maneuver agility in tight situations.

From this tradition WEG has expanded its competition to include endurance riding, reining, vaulting and para riding.

However for non-equestrians such terms as endurance, eventing or driving can be confusing or possibly create visions of steering wheels on horses or horses on a treadmill to check their heart rates.

The following are descriptions of the events that will be in the 2018 World Equestrian Games:

Dressage is a French word with a loose translation of “training or schooling.”

Para-dressage – WEG will include para-dressage test for riders with disabilities. The tests are similar to regular dressage and the judging is the same.

Stadium jumping is a test of the horse’s ability to jump 10 to 16 big colorful fences as high as 5 feet 3 inches. The jumps are set in an arena. Some are straight up and down, some are spreads and some even include water. The horses merely have to clear the obstacles in the correct order. Points are taken off if the horse knocks down a rail or if the horse refuses to jump. Once all the riders have taken the course, the top riders participate in a jump off that includes higher fences and speed. Jump offs get very exciting as the riders cut corners and gallop across the finish line.

Cross-country – The cross-country section of the three-day event tests the horse’s endurance and agility over typical hunting country. The course is between two and three quarters to four miles long and includes 24 to 36 jumps. The jumps are big and solid and made of natural materials, such as logs, stonewalls, banks or water. Most people wanting to view the cross-country event anticipate walking some distance. The rider is judged on clearing the fences within a certain time frame. TIEC has some of their cross-country jumps located in easy viewing locations for spectators.

Driving is a sport in which a single horse, a team (two horses) or two teams (four horses) are hitched to a cart or carriage, the driver sits on the carriage and controls the horse using long reins called “lines.”  WEG will include three types of driving competitions, dressage, cross-country marathon and obstacle cone driving.

Dressage driving competition looks similar to regular dressage. The tests are in a flat arena with the horses performing changes in gaits, circles, figure eights and other maneuvers.

The cross-country marathon is thrilling edge of your seat entertainment. Drivers race their teams through ditches, across bridges, through water obstacles, around fences and through woods. In some sections of the marathon competition, drivers are scored on how quickly they can negotiate the obstacles. Other sections are a test for the optimum time of negotiating the obstacle.

The obstacle cone driving competition is similar to stadium jumping. It is an accuracy test in which the driver must negotiate horses and carriage through a series of cones that have a ball balanced on top of each cone.

Endurance: Originally a test for cavalry horses, today’s endurance rides test the horse and rider’s ability to go long distances across country. Riders must stop at checkpoints and have their horses’ heart rate and temperature checked to be sure the horses are not being over taxed. WEG’s endurance competitors will complete a 100-mile course in approximately 12 hours or less, including checkpoints.

Reining gains its origins from the cowboys working cattle in the old west. Cowponies had to move, turn and stop quickly in order to move cattle or rope and throw a calf for branding. Today’s reining competitions excite crowds as the horses gallop through spins, sliding stops, rollbacks (horse stops and quickly pivots 180 degrees) and fast turns. Horses are judged on speed, precision, smoothness, finesse and cooperation with the rider.

Vaulting’s tradition dates back to the Cossacks who performed phenomenal acrobatic feats such as picking up a scarf from the ground at a full gallop, jumping from one horse to the other or riding standing up on the horse’s back. Today’s vaulting can best be described as acrobatic displays of skill and precision performed on horseback.