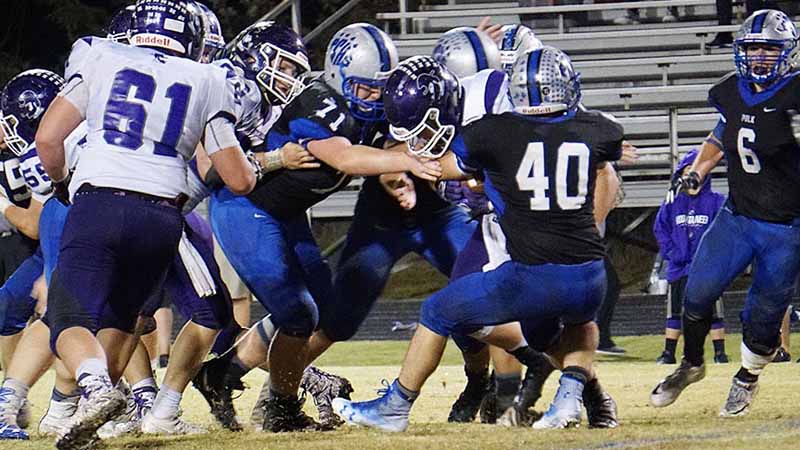 The Wolverines had less success handling the Mountaineers.

Mitchell controlled the line of scrimmage and controlled much of the game Thursday, powering its way to a 25-7 victory over Polk County in a Western Highlands Conference clash in G.M. Tennant Stadium. The game aired live locally on WMYA-TV.

In a game that could ultimately decide the top 1A seed in the WHC, the Wolverines (6-3, 2-1) trailed just 13-7 at halftime, but Mitchell (8-1, 2-1) put together a pair of long scoring drives in the third quarter while keeping Polk County’s offense from building any momentum.

Nothing epitomized the Wolverines’ frustration more than a series late in the final quarter. An Avery Edwards interception and Mitchell penalty gave the Wolverines the ball at the Mountaineer 12. But Polk managed just four yards in four plays, coming away with no points on its only visit in the red zone.

“We come out in the second half, we go three and out, we have a holding penalty the very first play of the second half,” said Polk County head coach Bruce Ollis. “We just kind of played behind the chains and never mounted anything.

“We had a chance to make a little noise there. We get a big interception and can’t put the ball in the end zone.”

Young’s TD toss, a 12-yard pass to Jesse Pitman, capped Mitchell’s opening drive of the game and gave the Mountaineers a 7-0 lead.

After an exchange of turnovers, Polk gained possession its 15. The Wolverines were still there on fourth down, 10 yards to go, and lined up to punt. Looking for a spark, Ollis gambled on a fake punt and Dillon Overholt made it work, weaving his way 45 yards to the Mitchell 40.

One play later, Elijah Sutton took an Overholt pitch and raced 35 yards to the end zone. Luis Hernandez added the extra point to even the score at 7-7 with 1:31 left in the first period.

Polk County’s offensive line fires off the ball to start a play during Thursday’s action.

“It was a situation where we felt like something needed to happen right there,” Ollis said of the 4th-and-10 call. “The play that was supposed to be run was covered, and Dillon made a little chicken salad. We wanted to throw the ball there, but they covered the guy that we thought might be open.”

The score stayed tied until late in the half when a short punt gave Mitchell posession at the Polk 35. The Mountaineers covered that distance in four plays, Ben Robinson racing in from the 15 with 2:47 left to give the Mountaineers a 13-7 edge.

A holding penalty on the first play of the third quarter signalled what kind of period it would be for Polk. Mitchell marched 61 yards in seven plays, the final one a 16-yard Young touchdown run, and then covered 89 yards in 10 plays, ending in Noah Pitman’s 4-yard touchdown run.

The Mountaineers missed both extra points, but those didn’t matter as Polk couldn’t generate a sustained drive.

“We never found an identity much on offense tonight,” Ollis said. “We just kept our defense on the field too long. Our defense really did not play that poorly for the amount of time they were on the field. We’ve got to help them some.”

Sutton finished with 92 yards rushing on 11 carries and surpassed 1,000 yards for the season, the first Polk County running back to top that mark since Cary Littlejohn in 2011. Overholt added 86 yards on 23 attempts. The Wolverines managed just two yards passing on 1-of-8 attempts.

Robinson had 99 yards on 11 carries as the Mountaineers rushed for 320 yards as a team.

“I don’t question our effort. Mitchell’s a dadgum good football team,” Ollis said. “What we’ve got to do, like the good old Southern expression, is we can’t get our daubers down.

“We’ve got to use this as a learning experience and a way to get better and come back and play better next week.”

Polk County travels next week to Mountain Heritage to face the conference-leading Cougars.