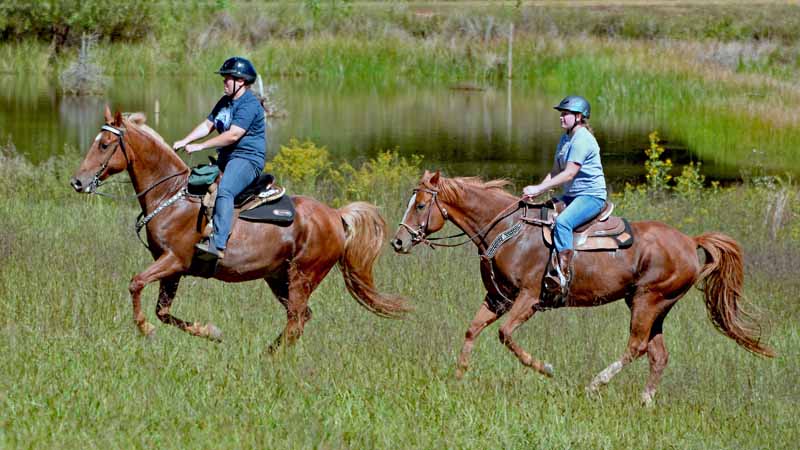 Field Hunters Emily Mitchell and Christina Goen enjoy a run up the slope along the pond at the Windridge Farm Fall Hunter Pace held Sunday, Oct. 1. (Photo by Lou Smith)

What a beautiful day for a Hunter Pace! The weather was picture perfect with a nice breeze and a sunny blue sky. Mother Nature was very kind this weekend! Without the landowners, this Hunter Pace would not have been possible. Many thanks go to Junior Arrowood, Carlson/Henderson, Jana Johnson, Melissa and Raymond Johnson, Wylie Properties, Terry Webb. There were some new trails available this go around to the riders’ pleasure.

There were many workers at Windridge on Sunday, Oct. 1 who were behind the scenes. Before the Pace, there was Jeff Davis, Paul Downes from Ireland, Allen Carlton, Amber Henderson, and David Henderson. Sunday’s volunteers were Allen Carlton, Janine Conner, Jeff Davis, Paul Downes, and Karen Park. The most favorite volunteer was the Master Grillsman, David Henderson! A feast was prepared for riders and visitors. Mr. Henderson was fast at work grilling chicken as the green beans, baked apples, and sweet potato soufflé were being prepared. Sweet tea, lemonade and iced water were the drinks of choice. The aroma filled the start-finish line and had riders drooling as the left for the trails! The parking areas were self-serve, as such. There was plenty of room for rigs to negotiate and not be crowded. 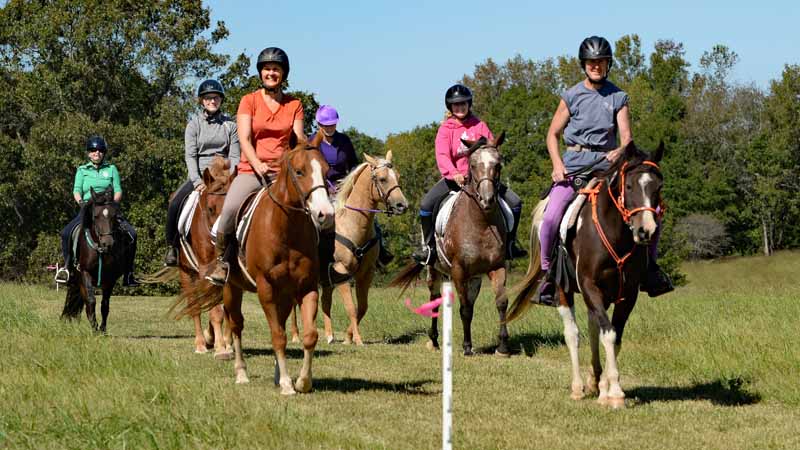 The trail was 10.3 miles and took riders past the new Dressage Arena and out onto the Cross Country Course. Riders had the occasion to take the jumps and have their pictures taken as they did. There were several water crossings which didn’t seem to hinder any rides. The trail was well marked with pink ribbons on the riders’ right side.

The turnout was wonderful on this beautiful day. There were 69 riders in 33 teams. 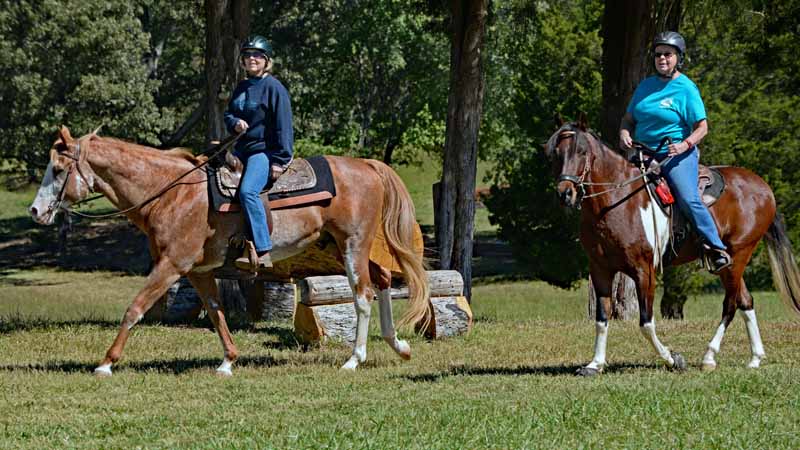 In the Trail Rider Division there were 40 riders in 17 teams. The Calculated Optimum Time was two hours, 30 minutes, six seconds.

Here are those results:

Included in the Hunter Place was a Poker Ride. The winner with a straight flush, nine thru king of diamonds was team #33, Caroline Coates, Elizabeth & Grace Caldwell!

Up next for the 2017-2018 Hunter Pace Series was the Tryon Hounds Fall Hunter Pace and Trail Ride held on Sunday, Oct. 15, followed by the Green Creek Hounds Halloween Ride on Oct. 22, 2017. To save some time and crowds at the registration tables, download the registration forms from the Western Carolina Hunter Pace website for the specific event and slap a return address label on it including your emergency contact and email to insure you can be contacted.

Check the website at www.wchpace.org for upcoming events, changes, and to view your photos taken by photographer Lou Smith. With the weather being so unpredictable here of late, rain dates are in place in case of a postponement. See you on the trails next time!

After two of the possible 17 scheduled events of the 2017-18 Western Carolina Hunter Pace & Trail Ride Series, there are ties all down the line, leaving the current standings as follows:

Marcia Headrick & Rich Neel have taken an early lead with 12 Series points at this time.

Kristen Brown & Jennifer R Smith have 11 points for Second Place at this writing.

Amy Christensen, Beth Goldizen & Rebecca Tolson have each earned 9 points for Third Place at this time.

Debbie Croft, Christina Goen and Emily Mitchell are in Fifth with seven points at this time.

Holly Bacola is close behind in Sixth, fittingly with six Series points.

Pam Hilsman is currently in Seventh with five points earned.

Catherine Gillet is currently in Tenth Place with one Series point.

Darleen Bullock, Nikki Hynes and DeAnna Norton have a good early lead with 17 Series points at this writing.

Ronnie Mann is in Second Place with a current count of 11 points.

Linda & Wayne Farris, Jennifer A Smith and Bobby Turner are currently tied in Third Place with nine Series Points each.

Tenth Place and one point apiece has been earned to date by Gail Bolt, Bob & Terri Davenport, Ann & Tony Hubbuch and Debra Kennerly.

Events will pick back up on Jan. 6 with the S.C. Upstate Equine Council at Clemson and continue straight through May after a short break for the holidays, so be sure to check the schedule and come play with us!

Thank you to our photographer, Lou Smith, for being at every event to capture the riders and their mounts as they fly over jumps, canter through the fields and enjoy the beautiful area trails.

For information on the Western Carolina Hunter Pace & Trail Ride Series e-mail Series Coordinator Jan Smith at WCHPace@Windstream.net or Jan@WCHPace.org, or call her at 828-894-8760.