Polk travels to Avery to continue the momentum 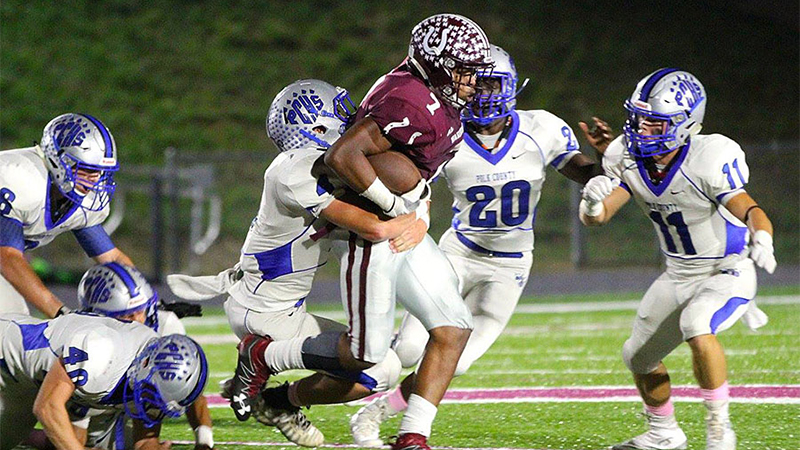 Tonight’s game “just as important as any other”

Unhappy with Polk County’s performance in the first half last week at Owen, head coach Bruce Ollis challenged his team in the locker room, looking especially for improvement on the offensive side.

The Wolverines responded with four straight touchdown drives in the second half en route to a 28-14 win.

Now Ollis hopes to see that momentum continue Friday as Polk County travels to Avery for a 7:30 p.m. kickoff in a Western Highlands Conference matchup.

The game marks the final stop in Polk County’s four-game road trip and will, once again, be a Homecoming game. It is the fifth straight Homecoming game for the Wolverines, including their own last month. It also is a key game in the race within the conference chase as Avery, Mitchell and Polk County position themselves to be the top 1A team in the WHC and earn the league’s top seed for the state playoffs.

Junior running back Elijah Sutton scored three of Polk County’s four touchdowns at Owen while rushing for 227 yards as the Wolverine offense began to find the groove it will need to be a factor in the conference title hunt.

“Every time Elijah rushes for 100 yards or more, we win,” Ollis said. “We’ve got to keep feeding him. One thing that has helped Elijah is that (quarterback Dillon Overholt) has been very unselfish running the option and getting the ball to Elijah.

“Statistically, he may not have the nights he previously had running the ball, but he is making us a better football team.”

Also helping the Wolverines build toward the heart of the WHC race and state playoffs is added playing time for more players. An injury to Blake Rackley has meant more time for Logan Connor. With Wyatt Derkach out last week, Avery Edwards saw more time in the second. An injury to Bryson Seay may limit his time Friday and mean more experience for someone else.

That depth may prove important against an Avery team that has flashed potential at times this season. The Vikings (2-5, 0-1) have averaged more than 27 points per game and have scored 34 or more points in three games. Preventing points, though, has been the challenge for Avery, which is giving up 40 points per game.

“Offensively, they have been very explosive,” Ollis said. “In the loss to Madison last week they scored 30-odd points (a 52-34 setback).

“Their quarterback (Van McCollum) is a playmaker. He has the ability to improvise. We will really have to stay in our rush lanes and keep him hemmed up.”

McCollum has thrown for 721 yards on 43-of-89 attempts, with nine touchdowns, and also leads the team in rushing with 543 yards on 99 carries and nine touchdowns. His brother, Sam McCollum, is the second-leading rusher and leading receiver with eight of his 24 catches going for touchdowns.

The Vikings operate from a 4-3 defensively and will often look to bring pressure under defensive coordinator Darrell Brewer, Avery’s former longtime head coach who returned this season as an assistant.

All will be a challenge for a Polk County team looking to conclude its marathon road trip with another conference win.

“Like everybody else, I’ll be glad to be back home,” Ollis said. “I told our players early on that we’re just going to be on the road and there’s nothing we can do about it. Good teams, though, find a way to win on the road, and we did that last week.

“We need to have a sense of urgency early this week. We can’t decide at halftime that it’s time to play hard. Our goal is to be conference champions, and this game is just as important as any other.”