Advertising on benches in Columbus: Tacky or beneficial? 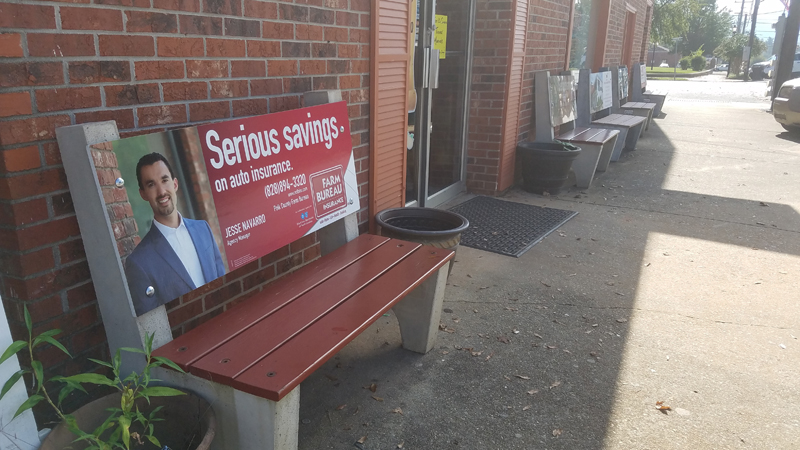 The Town of Columbus is discussing the possibility of regulating advertising benches located on town property. These benches are located in front of El Campesino downtown. (photo by Leah Justice)

COLUMBUS – While some say advertising on benches in Columbus is a tacky eyesore, others say it’s a good way for businesses to advertise.

Columbus Town Council met Sept. 28 and first heard from councilman Josh Denton, who has expressed concern about benches that have advertisements in downtown particularly.

Denton asked if the town could create an ordinance restricting those types of advertisements to certain parts of town. He also said the benches could look nicer, too.

Councilman Mark Phillips said the businesses need a way to advertise, and asked what is their alternative.

“I don’t think it needs to be done at our expense,” Denton said.

The benches are provided by an advertisement company who sells a business ad space on the back of a bench. Some of the benches are downtown, while others are at strip malls, such as the Food Lion Plaza and the former Bi-Lo building.

Robert Williamson made a presentation regarding the advertisements and made some suggestions.

Williamson said what may be an eyesore to one person is an advertisement bench for another. He said they are fairly new benches in good condition and structurally sound.

Williamson showed pictures of the benches as well as other pictures, including the old Amoco gas station. In his opinion, a property like the Amoco at the entrance to Columbus is an eyesore. He also mentioned kudzu issues at the car wash and further down Mills Street where the kudzu is taking over sheds.

“To me, those are eyesores,” Williamson said. “As a resident and a former small business owner, I prefer dealing with these kinds of eyesores instead of these businesses.”

Williamson suggested the town leave the benches alone and develop a Columbus business directory. He said there are 90 businesses in Columbus and the directory could be done in print as well as online. He also suggested the town clean up its gateways by holding property owners accountable.

McIntyre asked if nothing is done by the owners, what can the town do?

Barth said the town could either contract to have it cleaned up, or clean it up themselves and then send the property owner a bill. If they don’t pay the bill, the town could put a lien on their property.

McIntyre also suggested council members come back to the next meeting with spots in town they think are nuisances so the town can come up with a list to send letters.

On the benches, councilwoman Margaret Metcalf said the town should put them where they want them if they are going to be on town property.

Council also discussed who would be liable if someone tripped over a bench and hurt themselves. Town attorney Lora Baker said she is sure the company that owns the benches and the town would be in the lawsuit.

Council directed Barth and Baker to bring them ideas regarding regulating the advertising benches on town property without hurting local businesses.