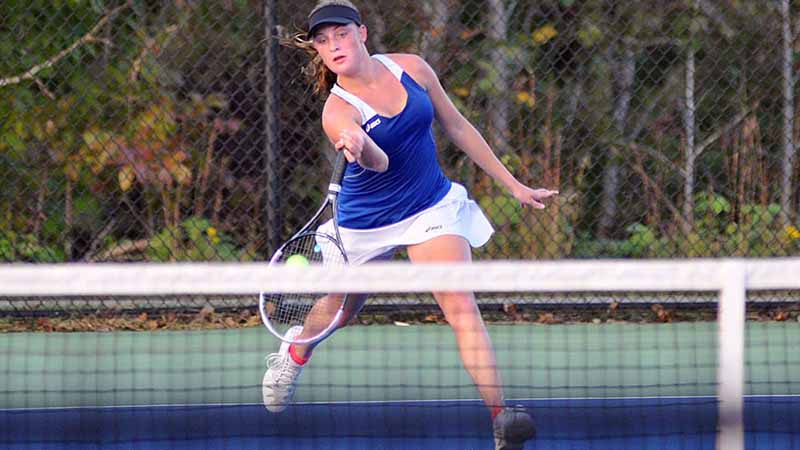 The singles final of the Western Highlands Conference tournament still to play, someone promised Griffin a pizza if she had reason to celebrate at day’s end.

As darkness descended on Polk County’s tennis courts, it proved time to place an order.

Griffin captured the WHC singles championship, earning an 8-5 win over Avery’s Hannah Rice to become the second straight Wolverine to claim the league title and earning a berth in next week’s 1A West Regional in Elkin.

Last year’s winner, teammate Hannah Jenne, paired with Tana Harris to compete in the doubles tourney. The two reached the final before falling 8-3 to Owen’s Jaiden Tweed and Ashley Valencia, but still also qualified for the 1A regional.

Seeded third in the singles bracket, Griffin began the day with a 10-4 win over teammate Bella Marino. The Polk freshman then routed Avery’s Ellie Kitchin 10-0, earning a much-needed extended rest as Rice pushed past teammate Aiden Betz 10-7 in the other semifinal.

Rice raced to a 3-0 lead in the final and still led 4-2 before Griffin began to rally. She ripped a forehand winner to close out the set’s eighth game and even the match at 4-4, then swapped service games with Rice to take a 6-5 lead.

In the crucial 12th game of the set, Griffin nailed a lob over Rice as she charged the net to reach game point, then earned a service break as Rice double-faulted, given Griffin a 7-5 edge. Tied at 30-30, Griffin raced to the net and smashed a forehand winner to reach match point, then claimed victory as a Rice forehand sailed just long.

“I’m proud of Julia. She’s had a great year and she’s not done,” said Polk County head coach Richard Davis. “Julia’s got some strokes and mentally, she’s a tough kid. To get down 3-0 against an experienced junior who’s a number one player, it speaks volumes that she stormed back.

Harris and Jenne will give Polk County three competitors at the 1A regional. Polk County’s team will also begin action in the state 1A playoffs on Oct. 18, hosting a team to be determined.

“Hannah and Tana are a great doubles team,” said Davis, who led Polk County to a perfect conference record and its first league title in 11 years but still wasn’t chosen by WHC coaches as the conference’s coach of the year. “I feel like if they play to their potential as partners in the regional, they’re going to do well.”