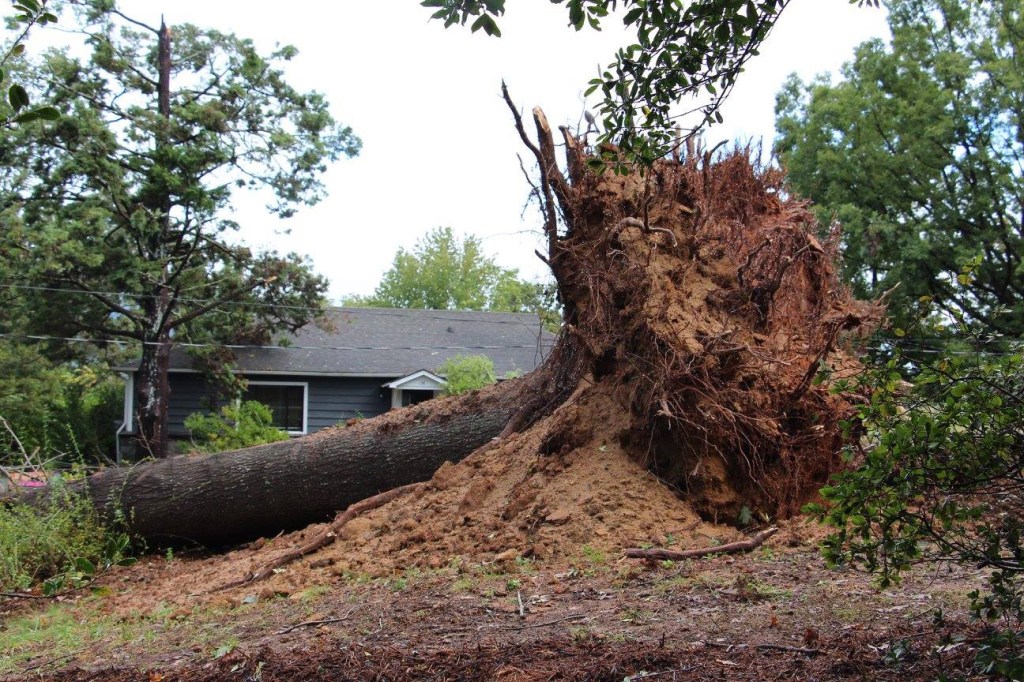 TRYON-The Town of Tryon looked like a ghost town all day Monday with traffic lights out and businesses closed after a tornado-like storm ripped through late Sunday afternoon.

Downtown Tryon, specifically Pacolet Street and Melrose Avenue and the third basin portion of Lake Lanier seemed to see the brunt of a massive storm that quickly tore through the area.

High winds and rain hit Tryon and Lake Lanier around 5:45 p.m., causing many trees and power lines to fall in the roads and on structures and vehicles. Some in the area have reported seeing a funnel cloud with many referring to it as a tornado, although that determination had not been officially made as of Monday afternoon.

Polk County officials said Monday they had contacted the National Weather Service to come and assess the damage and to determine whether or not the event was a tornado.

All of Lake Lanier and downtown Tryon area was out of power as well as a few other areas, including the valley outside Tryon. Late Sunday night, Duke Energy reported 1,500 out of power in the area. The Town of Tryon updated residents through social media Sunday evening alerting residents how to report damage.

Tennant said there was significant property damage from the storm, but there were no personal injury reports.

He said at approximately 17:46 (5:46 p.m.), the Tryon Fire Department was dispatched to a report of a large tree down on Melrose Avenue.

“While units were en route to this incident, the Tryon Fire Department received a call that there were additional incidents in our district involving trees and power lines down,” Tennant said in his release. “There was a call at 63 Mimosa Inn Drive that involved a transformer, which was arcing and endangering a bed and breakfast as well as two vehicles.”

Following those two incidences, Tennant said the fire department responded to many reports of trees down, some involving residences and motor vehicles.

Several agencies responded to trees being down and roads being blocked. Some areas of Lake Lanier were completely blocked Sunday evening, with residents reporting they could not access their homes.

Officers from the Tryon Police Department and the Polk County Sheriff’s Office also responded to calls for service regarding trees being down and roads being blocked as well as the Tryon Public Works Department. Polk County Emergency Management Director Bobby Arledge, Polk County Manager Marche Pittman and Tryon Town Manager Zach Ollis were also involved in locating citizens who may have needed services, according to Tennant.

The Landrum Fire Department and the S.C. Department of Transportation worked incidents in Tryon’s portion of the Lake Lanier response area.

Tennant said the town does not yet have accurate projects of property damage done.

“There has been a substantial amount of property damage done,” he said, “but we have no reports of personal injury due to this event.”